In his time as a boxing promoter Frank Warren has seen and overcome more than most. What the 68-year-old Londoner is facing, along with everyone else in the world is the unknown because of the coronavirus (COVID-19) pandemic. It has been described as the unknown enemy and now the hall of fame promoter faces an uncertain period. Boxing Scene caught up with Warren to get his opinion on how everything is being handled and how the outbreak is affecting him and his team at Queensbury Promotions. 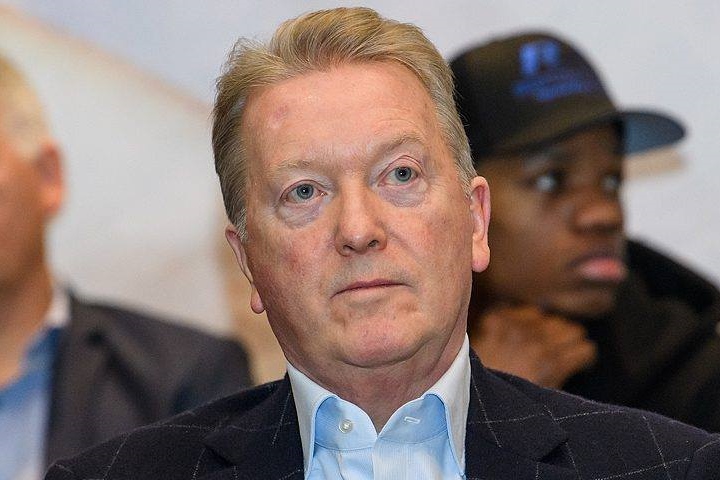 Boxing Scene: How’s your week been?

Boxing Scene: Obviously you’ve had to reschedule fights; postpone fights but you’ve announced that terms have been agreed for Carl Frampton to fight Jamel Herring.

Frank Warren: We’ve agreed terms. We were going to announce the fight but obviously we’re not going to announce the date yet because it’s pointless putting tickets on sale until we know where we are. It’s an awful time for the fighters and their families but for the fighters further down the card this is their only source of income. It’s not like they’re on salaries or anything, they only get paid when they fight so it’s tough times for them and their families at the moment. We need the boxing board to deal with the licence holders more on this, not just to make decisions because they get paid anyway whatever happens. These guys [the fighters] don’t. We’re an industry that only receives income on results so we need to make sure everybody is on the same page and they’re taking people’s views into consideration.

Boxing Scene: How is this all affecting you personally?

Frank Warren: From a business point of view it affects our income like it does everybody else in the country. We’re in a position where we put events on and if the events don’t take place then we don’t get paid. It’s very simple, and it filters down to everybody who’s involved and participates in the event. Not just the boxers, the guys who put the rings up, the security companies, the venues themselves they’re all shutting down. It’s a snowballing effect.

Boxing Scene: Are there fears that there may be some fighters who may have to go into alternative employment until this is over?

Frank Warren: I think there is. I think the problem they’ve got though is what employment can they land in? They’re paying off people left, right and centre. It’s not like they’re saying to the guys in the street don’t come in for a couple of weeks, they’re saying you haven’t got a job anymore. The employment market and the amount of companies that are going to go bust over this… it’s a good thing yesterday the government stepped up and said they’re going to do more, and they’re going to need to do more against all sectors, across a wide range of professions and businesses to make sure people get looked after because this is an awful time for them.

Boxing Scene: In your opinion is everything regarding the coronavirus being handled correctly or has there been an overreaction in some parts?

Frank Warren: Some of the newspapers have been hysterical and I don’t agree with that. All these things should be based upon informed knowledge. The scientists and health professionals are there to inform and up to now, certainly in this country, there have been many infected, just over 100 deaths… that in itself is a lot of deaths but if you look at how many people suffer from heart attacks, how many people die from cancer, how many people die from the flu in this country it’s not hitting those numbers yet and I hope it doesn’t. It does seem to be a virus that if anyone does die they’re either elderly or have underlying symptoms or conditions that make their immune symptoms very weak. Not to say we’re taking that lightly, but even now as we speak, the government in this country has not banned mass gatherings. What they’ve said is that the emergency services won’t be able to cover them. So that’s not banning them. To all intents and purposes you could run an event as such but you wouldn’t have police or ambulances and doctors there. Well you could get them privately but that’s what the position is. It’s the sports governing bodies that are closing down things like the Premier League because a lot of footballers had cases of it. They ran Cheltenham [Festival], there wasn’t a mass outbreak of it from there. There were quite a few pop concerts last week, certainly in Wales I know they had a couple of big ones, I don’t know what the fallout from that was or how many people were infected. There’s nothing you can do, you’ve got to be safe rather than sorry but it should be done with informed knowledge and not just making scatter gun approaches. The good thing is apparently we’re going to get an update from the government every day. I thought the Chancellor yesterday was excellent. Cometh the hour, cometh the man and I thought he looked more like the Prime Minister. It’s tough times for everybody, not just boxing, everyone is affected whatever way you look at it and there are some poor people who have lost their jobs and you wonder if the companies they’ve worked for are ever going to recover. You look at Laura Ashley, they may have gone under anyway but there’s going to be a lot of that going on anyway, that’s for sure.

Boxing Scene: As a team are you and the rest of Queensbury Promotions reviewing this every day?

Frank Warren: Every day. We’re on top of it looking at the implications and what the long-term prospects are. We can only do that based on what we’re told by the government at the moment. We’ve not laid anybody off. We’ve sent a lot of people home and told them to work from home. It is what it is.

Boxing Scene: In regards to your own health is that alright?

Frank Warren: I’m alright. Had a bit of a cold last week. Had a couple of operations on my back recently. A disc taken out at the base of my spine and had two discs replaced in my neck so I’ve been struggling a bit but I’m alright. I’m not lockdown material yet. I’m not locked down like Barry Hearn is!

Boxing Scene: Are you confident boxing will return this summer?

Frank Warren: I’m confident that it will eventually return but my concern is will people be able to pay and watch it if people lose their jobs.

Boxing Scene: With that being said do you have other plans in place?

Frank Warren: I think it’s just a case of gritting your teeth and getting on with it. No-one’s got a crystal ball. Last week we were running our show, it was on. This week, although the government said mass gatherings are not banned, it’s off. You’ve got to take each day as it comes and deal with it that way. The one thing I do know from my experience is when things are bad people want to be entertained and get their mind off it. Hopefully that’s going to be the case in the future but the concern is people still having jobs.

Boxing Scene: Have you been able to gauge the feeling and mood among your fighters?

Frank Warren: The couple I’ve spoken to are very disappointed and [for] some of them it depends where they are. Some of them have made a lot of money but that’s a small minority. The majority, especially the younger ones starting off, are struggling.

Boxing Scene: So how does Queensbury operate in the coming weeks?

Frank Warren: There will be someone coming into the office every day to check mail and stuff. We’re lucky in this day and age that we can do conference calls so we’ve got that situation going on. We’ll just see how it works out. It’s not like you can travel, you can’t jump on a plane and go somewhere. We’re all in the same situation. I think there will be a lockdown so that’s going to be challenging for everybody.

Boxing Scene: To touch on some boxing: Your thoughts on the Herring-Frampton fight.

Frank Warren: Carl is looking to be the first Irishman to win three world titles in three different weights. It’s a history making fight for him. We’re all looking forward to getting Herring over here. We’ve done a deal with Top Rank and MTK to get that done and we’re really looking forward to that fight taking place and it will take place. We were aiming for June but it’s pointless anything on sale because I don’t think anyone’s minds are on that. So we’ll sit and wait and see what happens in the next couple of weeks.

Boxing Scene: If the country does go into lockdown what are you going to do to keep yourself entertained?

Frank Warren: I’ll read. I love my films and I love my music. What will be a killer for me is I go to concerts quite often and I won’t be going to any for a while so that’s a killer for me. I like my food, I like going out and having a nice meal with a glass of wine so I’ll be doing that at home now!

Interesting interview and good updates by Frank Warren, I enjoyed it. :boxing: Hope we see more interview like this.