Frank Warren, the lead promoter for heavyweight contender Tyson Fury, admits that a proposed rematch with WBC heavyweight champion Deontay Wilder could be delayed as a result of two severe cuts that were sustained during Saturday's win over Otto Wallin in Las Vegas.

Fury had to dig deep after the bone-rattling third-round punch from heavy underdog Wallin sliced open a deep gash over his right eye in Las Vegas.

The shot left Fury half-blind for the remainder of the 12-round non-title bout as blood flowed freely down the right side of his face. 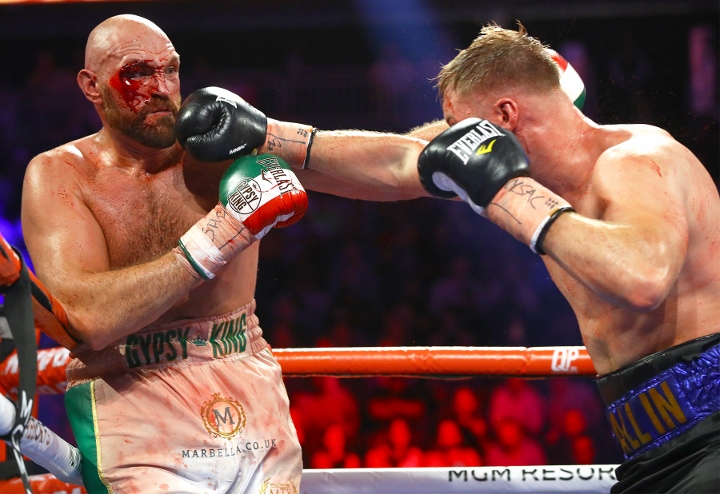 The rematch is planned for February of 2020, but Warren says the date will depend on Fury's healing.

"If it doesn't heal well the fight may have to be pushed back," Warren said to BBC Sport. "Hopefully that will not be the case. It depends how it heals, if it's OK it won't be a problem.

Fury was hoping for a dominant performance against the unheralded Swede to stoke excitement for his lucrative rematch with Wilder.

Speaking from hospital in Las Vegas, Warren added to BBC Sport: "The cut hampered his performance but at the end of the day he prevailed. He will have micro-surgery on the cuts - one above the eye and one on the eye-lid. It gave Wallin a lot of heart."

Wilder is also scheduled to fight, on a date in November, in a rematch with Luis Ortiz - which many view as a dangerous fight. In March of 2018, Wilder stopped Ortiz in the tenth round, but not before the Cuban puncher had him in trouble during the seventh.

Fury can get paid for stepping into the ring with Wallin, Schwarz, even WWE guys. In that same time he's turned down Wilder, Whyte, AJ and God knows who else. All were for legitimate straps or ranking. The guy's got…

I really wish he didn't get cut. I don't really think much of Wallin for it or lowly of Fury for not taking him seriously enough, but, it's a premade excuse now. He might avoid Wilder because of the cut.…

[QUOTE=kushking;20060765]I'll take that bet. Better pay up. I will pay I am a man of my word unlike welshes around here. So I guess we'll have to use exchange rate dollars to pounds too.[/QUOTE] You forgetting something my friend? 50…

[QUOTE=kushking;20060765]I'll take that bet. Better pay up. I will pay I am a man of my word unlike welshes around here. So I guess we'll have to use exchange rate dollars to pounds too.[/QUOTE] It’s “welchers” and I don’t car…