Fight week. Two words WBC / WBO super middleweight champion Franchon Crews-Dezurn didn’t know if she would be hearing anytime soon, but here she is, a few days away from a non-title bout against Ashleigh Curry on Saturday that puts her back in the ring for the first time in nearly a year.

“I don't know, everything's like a blur,” she laughs. “I was supposed to fight December 5th, and everything kept getting pushed back, but I'm like, 'Oh snap,' literally blinking like it is fight week. It feels a lot different, let's put it that way.”

Everything is seemingly different than it was when Crews-Dezurn fought Alejandra Jimenez on January 11. There’s a global pandemic still raging, the boxing world has been forced to pause and then readjust to the new normal, and that’s before we even touch on social justice movements and a heated U.S. Presidential race.

It’s not surprising when people call it the worst year they’ve ever had, but Crews-Dezurn was living 2020 before everything else kicked in, as she lost her titles to Jimenez, then found out that the Mexican had tested positive for the banned substance stanozolol. It should have been a cut and dried case, but the Baltimore resident had to wait until March (WBO), then June (WBC) to get her belts back. It was a dark time for Crews-Dezurn.

“There's this song by Brandy called 'Acapella' and she has this verse that says, 'I'm in a dark room in a bad position, and I'm looking for the light to restore my vision.' That kind of sums up where I was and where I still go sometimes. Yeah, I have the belts, but it still replays and it was a scary moment for me. Of course, I'm a warrior, I'm gonna fight, but the whole circus around it, wow.”

It's the kind of situation that can make any fighter question their path in life. That had to go ten-fold for Crews-Dezurn, a talented singer-songwriter who auditioned for American Idol in 2005 and who is also an entrepreneur who could probably do anything she wanted to and be a success in it without being punched in the face for a paycheck.

“I love boxing,” she said. “I've been doing it my whole adult life and most of my teenage life. My mom died and I feel like I have to complete my mission. Then, there’s also having a husband who's still in it with me and he's fighting. We have our own personal goals. So I think now for me, it's the things that I want to accomplish. I'm blessed that I became a world champion, but I have personal goals I want to accomplish, and I have to keep fighting for the women coming behind me, too.”

Glenn Dezurn is 12-2-1 with eight KOs as a pro, and he’s with his bride every step of the way on this journey, which isn’t for the faint of heart. But the couple keep pressing on, and while Crews-Dezurn made it to a world title on her own, now as she looks to take things to the next level of her boxing career, she’s decided to put some hustle behind her muscle in the form of 2020 BWAA Manager of the Year nominee Peter Kahn. And Khan has high hopes for “The Heavy Hitting Diva”.

“The thing about Franchon is that I truly believe that she transcends boxing,” said Kahn. “She is somebody that is going to live in the pop culture sphere. There's just something about her. She's a big personality and she's also an artist. She's a music artist, she's a singer, she's a fashion designer, and these are not just half-assed attempts to be something else. She's truly an artist and I got to see this first-hand when her and her husband Glen came to Florida during the summer. They spent a week at our training camp and I really got to know her, and I got to know him and it's bigger than just boxing, and that's what really interested me in wanting to work with her.” 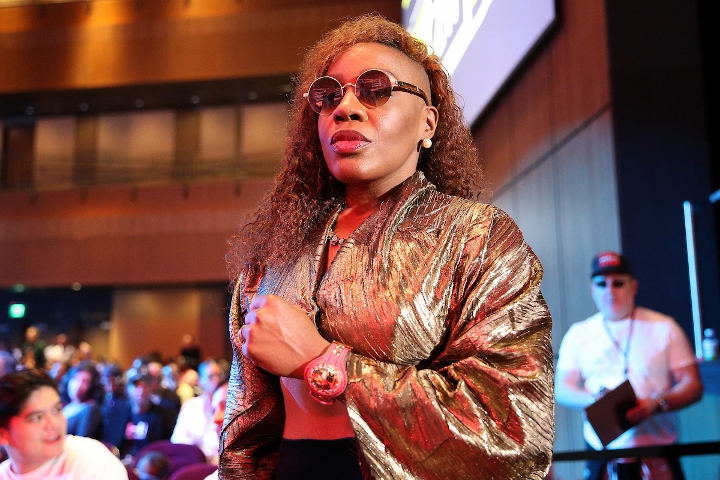 You could normally chalk that up to manager hyperbole, but in this case, it’s true. The 33-year-old does have that crossover potential, and with Golden Boy Promotions putting her on cards like this weekend’s Ryan Garcia-Luke Campbell event, she has the platform she needs. The only thing apparently missing is the right dance partner.

Multi-division champion Claressa Shields has shifted her focus to MMA for the time being, two-time opponent Maricela Cornejo hasn’t fought since their September 2019 rematch, and who knows when or if Jimenez will return. Makes you think that stepping into the ring with Crews-Dezurn is a decision made with some consequences to be dealt with.

“That's something that's happened since the amateurs,” she laughs. “But you have a Cornejo who wanted to fight twice. That's good that she believes in herself, but the same result - actually worse. It's the pressure. When you get in there with me, you're gonna have to fight. Win, lose or draw, you're gonna have to fight. I'm an old school fighter - I like to fight, and if you don't like to fight, don't get in the ring with me.”

Not to worry, Kahn has a plan if all goes well with Curry this Saturday in Dallas.

“No one expected COVID to happen and unfortunately, we've all had to adapt the best we can, and so Golden Boy, to their credit, is getting her back in the ring,” he said. “It's an eight-round non-title defense, but she just needs to fight. She needs to get in the ring, she needs to be active, and we're already communicating and targeting (WBA / IBF champion) Elin Cederroos for a full unification. And then the idea is to defeat Elin Cederroos and have Claressa come back up and try to compete with Franchon in an attempt to become undisputed with all the belts in two different weight classes.”

If that plan comes to fruition, and it’s a realistic one, which is something you can’t say for most of them in the boxing business, Crews-Dezurn will have her opportunity to not only reach the top of the sport, but also tell her story to a host of young people who will see that if you work hard and think big, anything is possible.

“Boxing raised me, so I had to figure out a lot of stuff because when I came up, women's boxing was around but it was very new,” she said. “I didn't even know about the pros, so navigating that, then adding the business to it, I went through a lot of stuff. I went through the cliches with the bad coaches and the people trying to take advantage. But I wanted more, so it was important for me to try to have some control. And then watching these powerful women, and watching people like Queen Latifah, Jamie Foxx and Will Smith, people who didn't let others box them in, it inspired me even more. And as far as athletes, look at Serena (Williams). All she did was tennis, but now she's a businesswoman and she's doing other ventures outside of tennis, and you have to understand, boxing isn't forever, especially being a woman.

"If you're a guy and do well in boxing, you could still ride off into the sunset. But for women, we have to find a way to eat, we have to find more ways to skin a cat, so it's very important. I hope some girls, and some guys, will look at me one day and say, 'Wow, she managed herself to a world title, she built a brand outside of that, she was commentating, she was making music, designing her own boxing uniform,' take something from that and try to expand and do something great with it. That's my mark on this world.”

And she’s just getting started. But for now, Crews-Dezurn has a fight to win. Those pre-fight feelings aren’t there yet, but she’s not worried; they’ll be there.

“I'm happy to get there, I'm happy to be scheduled to fight,” she said. “I just want to make sure everything's okay, and once I lace up my gloves and I put my shoes on, then it's gonna kick in all the way.”