Francesco Patera will defend his EBU European Lightweight title against Paul Hyland Jr on the same night that Daniele Scardina defends his IBF International Super-Middleweight title in an all-Italian clash with Allesandro Goddi at the historic Allianz Cloud, formerly Palalido, in Piazzale Stuparich, Milan on Friday June 28, live on DAZN.

Patera (21-3, 7 KOs) wrestled the European title from Newcastle’s Lewis Ritson in the former champion’s hometown back in October with a well-earned split decision that saw the Belgium resident reclaim the belt he lost against Edis Tatli, before making a successful defence against Frenchman Marvin Petit in February.

The 26-year-old is honoured to be fighting in his parent’s homeland for the first time in his career and is promising to deliver a special performance as he works towards securing a World title shot later in the year. 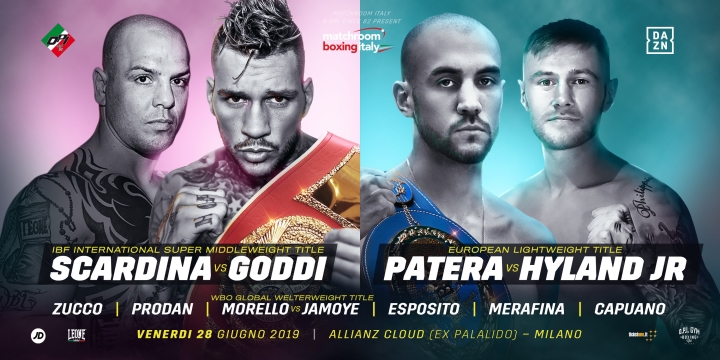 Hyland Jr (20-1, 7 KOs) suffered his sole career loss to Ritson last year in a failed bid for the British title in Newcastle but bounced back with wins over Giovanny Martinez and Miroslav Serban in Ireland, and the Belfast fighter will be hoping to land the full European crown having previously held the IBF’s version of the title.

Rozzano’s Scardina (16-0, 14 KOs) makes the first defence of the IBF International belt that he landed against Finland’s Henri Kekalainen at the Superstudio in Milan in March, the Miami resident was taken the distance for only the second time in his career and is aiming to return with a big KO against Sestu’s Goddi (35-4-1, 17 KOs) next month.

Elsewhere on the card, unbeaten Bergamo Welterweight talent Dario Morello (14-0, 2 KOs) clashes with Belgium’s Steve Jamoye (26-7-2, 5 KOs) for the WBO Global title, with further exciting additions to the undercard to be announced soon.

“I’m delighted to be back in Milan for what is our strongest Matchroom Boxing Italy show to date,” said promoter Eddie Hearn. “The main event features an all Italian Super-Middleweight war between Scardinia and Goddi and the impressive European Lightweight champ Francesco Patera makes his second defence of his title against Belfast’s popular Paul Hyland Jr. Rising stars Morello, Zucco and Prodan also star as we return to the stunning Allianz Cloud arena, former venue to iconic Italian fights. Don’t miss the action in Milan or watch live on DAZN!”

“We are very happy to return to the Allianz Cloud, formerly known as Palalido, where we have many great memories,” said Salvatore Cherchi, President of OPI Since 82. “We have staged major European and World title bouts at the famed venue and history will continue on June 28 with three exciting championship bouts and a host of emerging Italian prospects.”

“We are very happy to be among the first to host a great sport event within a venue that, after having made the history of the city of Milan, renovates and becomes again the “theater’ of Italian boxing,” affirms Veronica Diquattro, Executive Vice President Southern Europe of DAZN. “This is a further proof of DAZN’s will of being an active protagonist in the growth of international boxing, that also goes through a strong relaunch in our country.”

[QUOTE=BigZ44;19744951]I'm guessing this is where the divide is among fans. I'm paying for Showtime only for boxing and I was happy to drop HBO once they got out of the game, but that's because live sports are the only thing…

This is why Dazn does not work. Not enough fights worth the subscription. And it really hurt the marketability of these fighters when so few eyeballs are on them. To many hoops to jump thru with a Dazn. I make…

This is a good card. I haven't cared about Hearn's other Italian fights but i'll watch this one.

[QUOTE=The Big Dunn;19744883][B]I purchase HBO and SHO for programming other than boxing so when they show it it's a bonus because I get to watch everything else. DAZN needs to have fights worth the $19.99 since they have nothing else…

[QUOTE=The Big Dunn;19744882]If there were only 9 complaints #daznsucks wouldn't have been trending for 2 days. I don't see why it's a problem presenting all the positives and negatives about a product we are being asked to purchase.[/QUOTE] My bad,…