Frampton: If McCreary Stands & Fights Me, My Night's Easier

Tyler McCreary is longer, taller and younger than Carl Frampton.

The 26-year-old McCreary also is undefeated. Northern Ireland’s Frampton lost his last bout by 12-round unanimous decision, had to battle early in this training camp through a hand injury suffered during a freak accident three months ago and hasn’t fought in nearly a year.

McCreary might appear to have some advantages, but he is the fighter taking a steep step up in competition when he faces Frampton in a 10-round junior lightweight fight Saturday night in Las Vegas. ESPN+ will stream Frampton-McCreary as part of a nine-bout card from The Chelsea inside The Cosmopolitan (6:30 p.m. ET/3:30 p.m. ET).

“Experience obviously accounts for a lot going into this fight,” Frampton told BoxingScene.com. “I’m a solid 12-round fighter. I’ve shared 12 rounds with a lot of top guys. McCreary has only done eight rounds before. This is a 10-round fight, not a 12-round fight, but I’m used to the long rounds. He is not used to that, and he’s stepping up. You know, it’s a huge jump up in class for him, going from what he has been fighting to what he’s about to fight on [Saturday night].

“So, he may seem relaxed walking around the hotel here. But I know, deep down, he’s thinking a lot about this fight and how it’s gonna pan out. I think he’s worried, and he should be, really, if you think about where he’s came from and what he’s done. It’s a massive leap for him, but I need to be switched on completely and be ready for the very best Tyler McCreary we’ll ever see.” 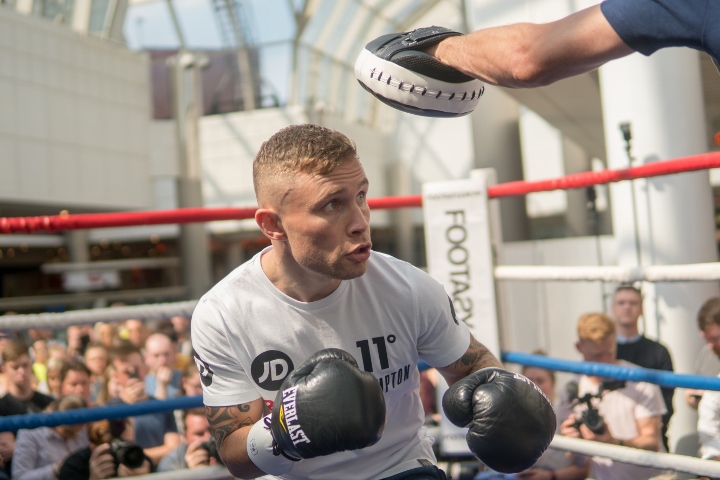 Northern Ireland’s Frampton, 32, hasn’t fought since England’s Josh Warrington beat him by unanimous decision in their 12-round fight for Warrington’s IBF featherweight title last December 22 in Manchester, England. The Belfast-based boxer was supposed to return August 10 in Philadelphia, but his 10-round fight against Mexican veteran Emmanuel Dominguez was canceled because a concrete pillar fell on Frampton’s right hand while he sat in a hotel lobby five days before that bout.

His hand was in a splint for about a month. Frampton delayed sparring and hitting the heavy bag early in camp to give his hand additional time to heal.

Frampton (26-2, 15 KOs) is eager to finish what largely has been a wasted year by beating McCreary (16-0-1, 7 KOs), of Toledo, Ohio. He hopes a victory Saturday night moves him toward either a junior lightweight or featherweight title fight in 2020.

“I just got a message from a friend – I’m not saying who it was, but a boxer – and he said that McCreary, there are rumors from his camp that he’s gonna fight me like Warrington fought me,” Frampton said. “If that’s the case, I think that would be very strange tactics and I think, you know, you take all this stuff with a pinch of salt. But if Tyler McCreary wants to stand and have a fight with me, then I think he’s just made my night much easier.”

Several sports books list Frampton as a 25-1 favorite to beat McCreary, but Frampton isn’t underestimating him.

“He’s tall,” Frampton said of the 5-feet-9 McCreary. “He’s rangier than me. He has a decent jab. You know, he can move pretty well. He’s a prospect that not many people know about. But in saying that, this is his big chance to kind of perform and put himself on the big stage. So, anything that I’ve seen from him, any footage that I’ve seen on YouTube, he potentially could perform better than that because there’s no pressure on him and this is his big opportunity.”