Frampton: I Would Be Ireland's Greatest Ever Fighter if I Win Third Divisional Title

It was another day in the life of Carl Frampton, which has recently meant the kind of bad luck a prizefighter chasing a third divisional world title really doesn’t need.

So what was the Belfast native to do when his opponent for this Saturday’s main event in London, Vahram Vardanyan, fell out of the bout last week due to visa issues? Grin and bear it. And avoid walking under ladders or letting black cats cross his path.

“I feel like I could probably get away with walking under a ladder because there's absolutely no way I could run into any more bad luck,” laughed Frampton. “Nothing ever seems to go my way, especially the last year or so. It's been a bit of a disaster, but it is what it is, and I'm confident that we'll get an opponent over the line in the next day or so and I'll be fighting on August the 15th.” 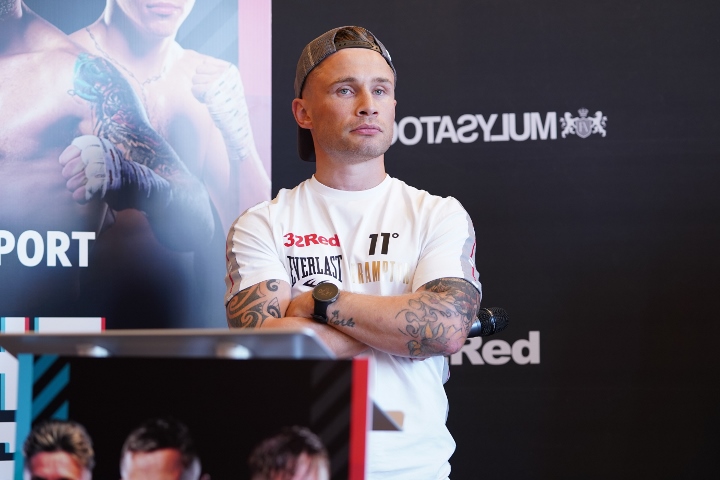 He will be making the walk this weekend, as Scotland’s Darren Traynor stepped in to face “The Jackal” on the ESPN-televised card which also features Mick Conlan against France’s Sofiane Takoucht.

All’s well that ends well, we suppose, but you have to wonder who the affable Frampton has angered to be on the receiving end of this change of opponents, the concrete ornament that broke his hand and forced him out of a bout against Emmanuel Dominguez a year ago, and the COVID-19 pandemic that has put a challenge for Jamel Herring’s WBO junior lightweight title on hold. Did he pick on his classmates at school?

“I was a good kid,” Frampton laughs. “But someone has an issue with me, somewhere in the universe and someone is sticking needles in their voodoo doll or something, I don't know. But it hasn't been great the last number of years.”

Frampton keeps moving forward, though, dodging the missiles that have kept him from his goal of another belt to add to a collection that includes championships at 122 and 126 pounds, determined to reach the finish line sooner rather than later.

“I'm a very positive person and that's the way I am in everyday life,” he said. “I just have to focus.”

That focus has worked well for him over the years, as he became one of the best of the best thanks not just to his titles, but his wins over the likes of Steve Molitor, Kiko Martinez, Scott Quigg, Leo Santa Cruz and Nonito Donaire. But since he lost his featherweight title to Josh Warrington in December 2018, Frampton has only fought once, shutting out unbeaten Tyler McCreary last November. The possibility of a title fight against Herring was more than enough to get the juices flowing again, but then COVID-19 hit. And if anyone has had worse luck than Frampton recently, it’s Herring.

“There can't be too many people that I should feel sorry for, but I do feel sorry for Jamel,” said Frampton. “It's bizarre what's gone on with both of our careers at the minute.”

True, but with Frampton returning on Saturday and Herring expected to face Jonathan Oquendo on September 5, there is the hope that things are turning around for both fighters. But, of course, there is the business of the pair winning their upcoming bouts. The 33-year-old Frampton is expected to do just that, and he’s not going to allow being a prohibitive favorite get in the way of his plans.

“The only thing that may get in my road here is consistency,” he said. “But I'm wise enough and experienced enough to allow that not to happen. I was expected to beat Vardanyan, and I expected to beat him comfortably. Whoever they get at this point in time, I will be expected to beat them as well and beat them comfortably, and that's what I intend to do. I intend to take all my frustration out on the opponent and just chill out with my family for a while and hopefully then we can get the Jamel Herring fight before the end of the year or early next year.”

And if there is any motivation needed, fighting with a fellow Belfast native in rising star Conlan does give Frampton an extra push to put on a show for their hometown fans who will most certainly be watching the event.

“It's a big deal,” said Frampton. “I think that looking at the stages of our careers that we're at, I'm the guy that has been there and done it, and still want to do it good and still want to become a world champion in a third division. But I don't have as many years left in boxing as I've already had. So Mick is gonna be the guy that comes in behind me and fills my boots. So for the two top guys in Belfast at the minute to be sharing a bill, albeit without a crowd, albeit in England and not back home in Northern Ireland, it's nice for me and Mick to be doing that together and it's something we will reflect on for many years to come and people will talk about as well.”

They’re already talking about Frampton’s place in the annals of Irish boxing history, and he may already have a case as the best ever from his part of the world. For his money, welterweight great Jimmy McLarnin owns that distinction, but with a third divisional title, Frampton admits that he may give McLarnin a run for that mythical championship.

It can’t be easy being that humble when folks call you “the greatest” in anything. But Frampton wears it well, something he owes to his family and the people of Belfast.

“The thing is, being from where I'm from in Belfast, people don't take too kindly to arrogance or people who get above their station or people who have big heads and high opinions of themselves, so I feel like the background that I had and that I've grown up with is what's keeping me grounded,” he said. “I've got a wife, as well, who would certainly let me know if I was getting above my station. (Laughs) But I was a kid who grew up in Belfast, and hated anyone that was flash or anyone with any sort of arrogance. I liked the down to Earth guy who done what he said he was gonna do and didn't make big, bold, outlandish predictions. For example, I loved Wayne McCullough as a kid, but hated Prince Naseem Hamed because of his arrogance. And that's still me to this day and I don't think the people of Belfast would allow me to get out of line or above my station.”

Now if he could just find some good luck, Frampton would be all set. But he feels like things are going to turn around here in the rest of 2020.

“I want it to read that this was the year that I created history and became Ireland's first-ever three-weight world champion,” he said. “And that's what I intend. Hopefully, the Jamel Herring fight can happen this year, but that's the goal, that's the objective.”

[QUOTE=BoloShot;20707040]Well he would be unique from the standpoint of becoming a three weight champ but he'd still clearly not the best Irish fighter ever considering our extensive history in the sport.[/QUOTE] true, but the multi division titles kind of lost…

[QUOTE=Jab jab boom;20706921]good career, but the best in the history of a country? Compare him to the best boxers to come out of other countries that are known for boxing whether its the US, UK, Mexico, Puerto Rico, Cuba, Philippines…

[QUOTE=BoloShot;20706889]Are you sure? He's had a very good career.[/QUOTE] good career, but the best in the history of a country? Compare him to the best boxers to come out of other countries that are known for boxing whether its the…

[QUOTE=Marvlus Marv;20706860]Framps is Northern Irish which isn't Ireland, it's part of the UK if we are to be factual. He's having a dig at Barry McGuigan who was actually born in Ireland but managed to united many on both sides…