Once with aspirations of bringing home a Gold medal from 2020 Tokyo, Kahshad Elliott is now armed with loftier goals in mind.

The ten-time National Champion in the amateur has set his sights on the pro ranks, having signed with rising manager Tim VanNewhouse as part of the growing roster of talent at Split-T Management.

“I am just ready to get this pro thing started,” Elliott told BoxingScene.com. “I want to show the world that I have the tools and the ability to go down as one of the greats in the sport. 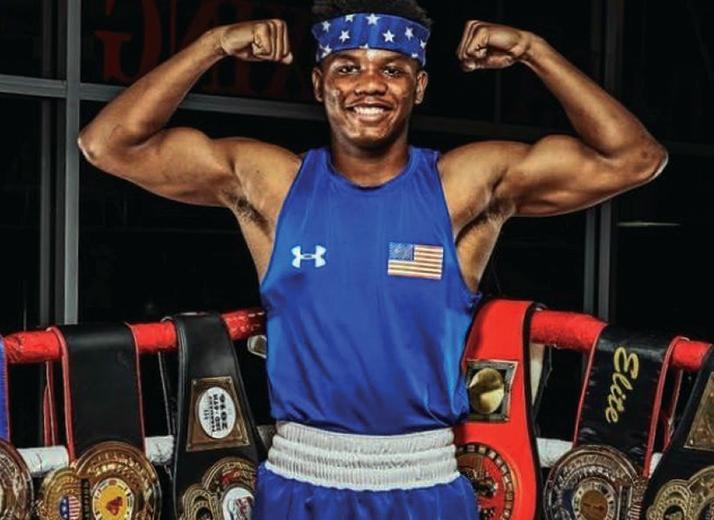 Elliott—a 19-year old blue-chip talent from Plainfield, New Jersey—sought a spot on the 2020 U.S. Olympic boxing team in the 165-pound division, but will bring his 5’11” frame down to junior middleweight (154 pounds) upon making his pro debut.

The pro journey comes on the heels of Elliott falling short at the 2020 Olympic Trials which were held last December in Lake Charles, Louisiana. Despite the on-site results, his talent and reputation preceded him to the point of being targeted by VanNewhouse, with Elliott serving as part of a quartet of can’t miss future stars he signed from the competition.

Of the four, Javier Martinez is still on course to compete in 2020, while Dalis Kaleiopu and Marcus Valle will join Elliott in the pro ranks. Elliott is the youngest of the four, but arguably the most eager to make an immediate splash.

“As much as I wanted to make the Olympic Team that really wasn't a dream of mine as a kid,” admits Elliott, a switch-hitting boxer-puncher who went 117-23 in an amateur littered with championships. “That came as I kept winning national tournaments. My dream was always to be a World champion.

“Losing in the Olympic Trials really hurt me but now I get to use that disappointment as fire to make my dreams a reality. So, I couldn't be any more excited to enter the pro ranks.”

The sport runs deep through Elliott’s family roots, as he trains under his father Ahman “Coach O” Elliott of out Strap City Boxing in Middlesex, New Jersey. His younger sister, Kaheil is also a top rated amateur and part of the USA Boxing Youth High Performance squad.

Having taken up the sport at age six and long ago learning the ins and outs, the prodigious talent knew what to look for in taking his career to the next level. The journey saw the teenaged talent work with Shakur Stevenson—a 2016 Olympic Silver medalist and current unbeaten featherweight titlist—as well as getting in quality work with Barry Hunter and all of the talent that frequents his HeadBangers Gym in Washington D.C. His past experiences and natural instincts led to signing with VanNewhouse, whose growing roster of boxers has earned him accolades as boasting one of boxing’s best eyes for talent.

“I have been watching Tim with his fighters over the past couple of years and we always felt he gave us good honest energy,” notes Elliott, who boasts two amateur wins over another VanNewhouse talent, rising welterweight Diego Pacheco (8-0, 7KOs). “My Dad and I think Split-T Management is the best team in the business right now and I look forward to our partnership together for years to come.”

Elliott—who is currently a promotional free agent—plans to make his pro debut in the 1st quarter of 2020.