Flores Motivated By Criticism for ‘Faking’ Against Rigondeaux

Every time Moises Flores hears or reads that he was “faking” against Guillermo Rigondeaux, it makes him angry.

Rigondeaux, the former champion’s team, and some factions of fans and media contend Flores could’ve continued once Rigondeaux fouled him after the bell to end the first round of their 122-pound title fight nearly a year ago in Las Vegas. Flores and Rigondeaux threw punches after the bell, but Rigondeaux’s left hand knocked Flores to the canvas. 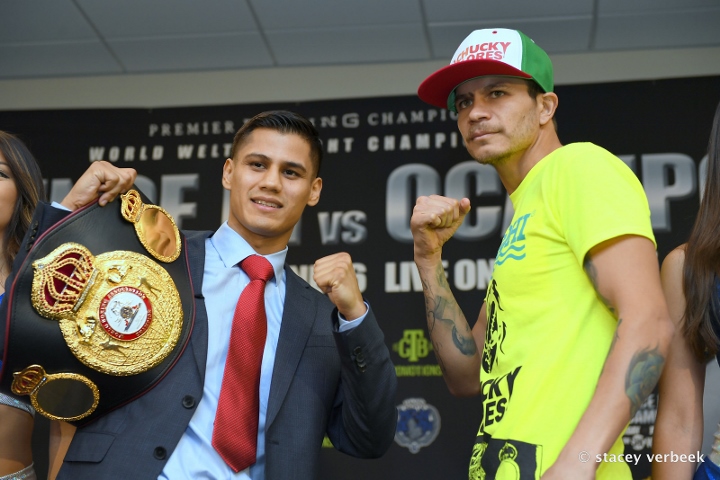 Rigondeaux’s flush left hand left Flores sprawled out on the canvas. Just before Rigondeaux’s left landed after the bell, he connected with two left hands while holding down Flores from behind his head.

The backlash Flores faced for not continuing has hung over him since they fought last June 17 at Mandalay Bay Events Center. He disputes that he was “faking” the extent of how hurt he was to try to get Rigondeaux disqualified.

“It bothers me a lot,” Flores told BoxingScene.com through a translator. “But every time I read a comment or hear this or that, it just motivates me.”

The WBA ordered an immediate rematch between Rigondeaux and Flores. Rigondeaux instead moved up two weight classes to challenge Vasily Lomachenko, then the WBO super featherweight champion.

Cuba’s Rigondeaux (17-1, 11 KOs, 1 NC) lost that bout by technical knockout December 9 in New York because he declined to continue following the sixth round.

“It was a learning experience,” Flores said of what happened against Rigondeaux. “I learned from it. I learned that no matter if you’re a gold medalist or you’re a champion, you can’t show these guys too much respect in the ring because anything can happen. It won’t happen again. It’s not gonna bother me. It actually motivated me and it’ll make me better.”

Rigo fouled by holding, they both fouled by hitting after the bell, then Flores was foul for faking like he was out. He got scared and wanted to win by DQ.I clearly saw his coaxh telling him to stay down

He clearly faked it. After that last hit he made a brief gesture to the ref about him getting hit after the bell. Then he was "out". When you get get knocked out by a punch you just drop. Not…

He 100% faked it. His corner was yelling for him to stay down.

You were faking. You dived to try and get Rigo disqualified, so you could steal his title. It was on television, we all saw it.