The 28-year-old meets Taxas’s Maurice Hooker (23-0-3, 16 early) for the vacant WBO light-welterweight title at the Manchester Arena on Saturday night in a fight that “Turbo” believes can get him on the right track after deciding to vacate his 135lbs belt in order to seek fresh challenges.

“That would mean everything to me,” said Flanagan when speaking to David Anderson of the Daily Mirror about what victory would mean to him.  “Ricky is someone I looked up to as a kid so to emulate what he did would be a dream come true.” 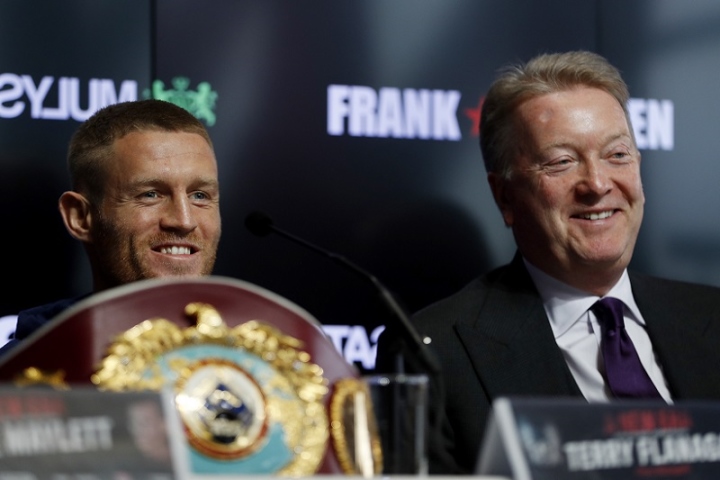 Warren handled Hatton’s early career and laid the groundwork for his June 2005 win over the legendary Kostya Tszyu at the same venue.

With all the fight week talk focused on the comeback of Tyson Fury, who meets Sefer Seferi over 10, Warren feels that Flanagan can quietly slip in and possibly steal the show by netting another WBO belt.

“They both have a great desire to win,” he said when comparing Flanagan to “The Hitman”.  “They don't know what defeat means.”

The show will be shown live on BT Sports here in the UK as well as being streamed live in the US via Showtime’s Facebook page.

IN OTHER NEWS:  James Moorcroft (6-0, 1 KO) has made rapid strides since leaving behind the world of white collar fighting just over twelve months ago. The 25 year old from Wigan will step up to eight rounds and is scheduled to fight for a Challenge belt on VIP Promotions’ upcoming show in Bolton on June 16th. It is a show of faith in Moorcroft’s progress that his manager, Steve Wood, and trainer, Lee Blundell, have no qualms about pitching him in so quickly.

“It’s like a whirlwind. I said to myself that I’d give it a year. That year is nearly up now.

“I look at some boxers and they might not want to take the risk but although I’m only 25, I’m not getting any younger. I also believe in my training and I believe in the people around me and the support I’ve got.

“I don’t like thinking too far ahead. Because I’ve never been expected to get very far, every little milestone is a massive thing. I only had my first ever fight at about 20 years old. I’ve started thinking now that maybe this time next year I can be fighting for an area title or maybe even an English title. Who knows.”

Moorcroft’s progress was rewarded by a phone call asking him to to give Terry Flanagan some rounds in preparation for next Saturday night's WBO junior welterweight title fight with Maurice Hooker. Standing opposite the former lightweight champion of the world must have been a surreal - and proud - experience for a fighter who was making his way on the unlicensed circuit not too long ago.

“It was a great experience and another milestone for me. It was on my way home in the car when I thought to myself; ‘Bloody hell. That was amazing.’

“In fact, it was when I asked Steve Maylett about whether he thought the fight between Terry and Vasyl Lomachenko might ever end up happening and he said; ‘Yeah, it might do.’ When you hear those kind of names and you’re in those circles you do pinch yourself.

“It’s all just a bit mad. This will be my seventh fight in just over a year. I’m still new to it all and I’m just realising where I’m at. I feel like I fell asleep and woke up a year later. It was a fantastic experience and something you can take to your grave with you.”

[QUOTE=MEXfistology;18834604]Kostya Tszyu is not "legendary"...[/QUOTE] You must have been too young to remember Tszyu? Held all 3 belts and ko'ed everyone who was willing to fight him. I didn't give Hatton a chance, one of the biggest upsets ever. Do…

[QUOTE=MEXfistology;18834604]Kostya Tszyu is not "legendary"...[/QUOTE] Tyszu was a beast and defo one of the very best of the late 90s and earlys 00s so i would say that makes him a legend

[QUOTE=MEXfistology;18834604]Kostya Tszyu is not "legendary"...[/QUOTE] Dont be direspectful Tszyu is a legend everybody knows that even in the amateurs