Filip Hrgovic continues his transition from prospect to rising contender.

The 2016 Olympic Bronze medalist from Croatia makes it a perfect 10 in the win column, after stopping Texas’ Eric Molina in the third round of their heavyweight scrap Saturday evening at Diriyah Arena in Diriyah, Saudi Arabia.

Hrgovic was the aggressor from the opening bell, while Molina spent much of the night complaining of fouls and offering little more than an occasional sneak counter right hand. Molina was floored late in the opening round, with Hrgovic offering a punishing body attack and a swarm of right hands, only for referee Ian John Lewis to wave off the sequence, claiming the Texas-based heavyweight was pushed to the canvas. 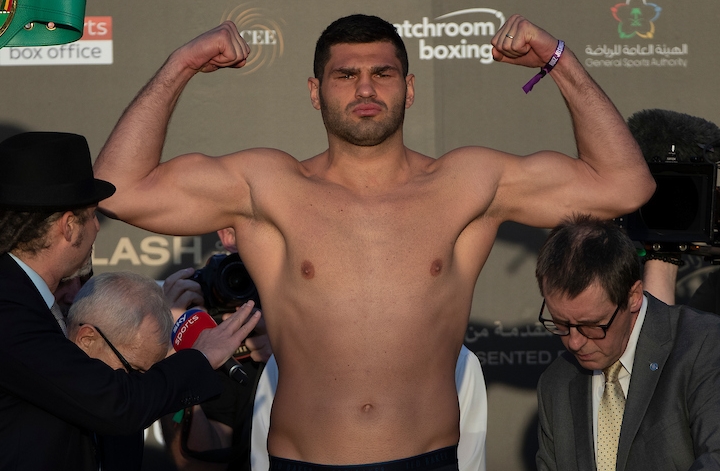 Similarly, another apparent knockdown was overruled early in round two, when a right hand upstairs caused Molina to fall to the canvas. Action resumed without acknowledgement of a foul, althoughHrgovic continued to stick with what worked best. Right hands upstairs had Molina coveringup—and often complaining of being hit behind thehead—before a body shot forced him to the deck for the bout’s first official knockdown.

Molina managed to buy himself some time by taking out his mouthpiece, but was merely delaying the inevitable given the one-way traffic. The American journeyman did his best to fight back, swinging right hands in hopes of catching Hrgovic off guard.

Hrgovic closed the show in style in round three. Molina dipped his head low—as he’d been doing all night—and left himself defenseless for a chopping right hand behind the ear. Molina remained on the canvas the entire time, holding the back of his head in his best effort to sell the referee on a foul. The third man wasn’t sold on the act, counting out Molina at 2L03 of round three.

Molina falls to 27-6 (19KOs), having now lost three of his last five starts—the other two losses coming in title fight knockouts at the hands of Deontay Wilder and Anthony Joshua.

Hrgovic picks up his third knockout in as many fights in 2019 since signing a co-promotional deal with Matchroom Boxing—the lead promoter for Saturday’s event—as he improves to 10-0 (8KOs).

The bout served in supporting capacity to the heavyweight title fight rematch between California’s Andy Ruiz (33-1, 22KOs) and England’s Anthony Joshua (22-1, 21KOs). Both bouts along with the heavyweight-themed undercard air live on Sky Sports Box Office in the United Kingdom and stream live on DAZN in the United States.

Molina landed some clean shots so Hrgovic needs to tighten up the defence. It seemed like some of those shot Molina took didn't look too hard. I got the sense that Molina was looking for a way out. He was…

I did not like these hits to the back of Molina's head. Hrgovic can be a good prospect for tthe future and can get a fight for one of the belts within next 5 years.

I am not getting your point

[QUOTE=JakeTheBoxer;20235819]It took Wilder nearly 9 rounds to stop Molina, lol.[/QUOTE] And he did right? Just like he did verse Duhaupas, just like Szpilka, just like Ortiz twice, and even Fury who was trying to avoid getting knocked out still got…