Fielding: Canelo Might Think It's Easy - I'll Be Ready For Him!

Rocky Fielding was told some big news would be broken in 15 minutes. He braced himself and then waited. He waited some more. Then his newborn began to cry and being a father took over. Fifteen minutes came and went. More than half an hour passed before the baby was settled and he looked at his phone.

In that time, Saul Alvarez had announced to the world that he would be fighting Fielding in New York’s Madison Square Garden on December 15.

“It’s been off its head,” said the Liverpool man of the global reaction. An Instagram picture of his own announcement garnered 11,000 likes and his mentions on Twitter went through the roof. “It hasn’t stopped. I just don’t know how all those people with millions of followers can cope. I’ve only got a few and the phone hasn’t stopped.”

And, of course, comment has been mixed. Some have wished him well for his impossible task while others say he is doing little more than selling his WBA 168lbs belt to the Mexican.

“It’s split,” he added of the feedback. “I’ve had good, positive tweets and you get the bad, well. Not bad… People’s opinions. But some have been not nice. I knew that would come anyway, I knew once it was announced I’d get the bad ones and I’d get positive ones. It’s been a mixture. More good than bad.” 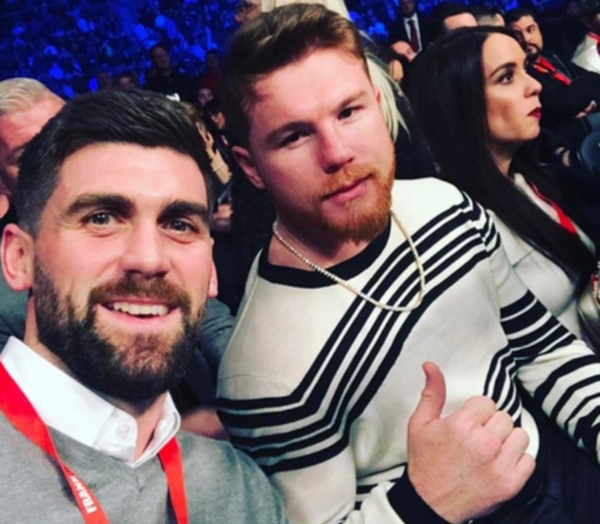 But Fielding and his team, led by trainer Jamie Moore, are tuned into a higher power they believe in. Moore subscribes to the schools of thought from The Secret, and he’s taught Rocky his learnings.

Fielding has visualised the success he has had since a one-round shootout loss to derby rival Callum Smith, which saw him rebuild, nab a version of a WBA belt and land this, a fight to set up his family for life.

As a young amateur, Fielding had his picture taken with a WBA title. Now he has the ‘regular’ version on his mantelpiece.

Then, after losing to Smith, he vacationed to New York and toured Madison Square Garden. He took pictures in the locker rooms, shot images at courtside and then watched a game from the $20 cheap seats marvelling at those with a better view than him.

On December 15, he might wish he was back in the bleachers but he is not allowing negativity into his thoughts.

In fact, quite the opposite is the case. Ten weeks out and he is filled with excitement and anticipation.

“I was lying in bed last Wednesday night at half-nine and I got a phone call from Jamie Moore and he said, ‘Canelo wants to fight ya’,” Rocky explained to BoxingScene.com. “I said, ‘Really?’ He said, ‘Yeah’, and it’s been going on for a few days and I’ve had to keep it quiet and I said, ‘Let’s do it. I’m up for it’. And he said he would ring them back and let them know. And that was it.”

Rocky did not sleep that night and over the following days he repeatedly hit the refresh button on his emails and Twitter feed.

Then all hell broke loose on his social media channels.

Canelo is one of boxing’s superstars, Rocky is simply known as ‘Rocky from Stocky’, a lovely down-to-earth type who gives his all and does his best. He is also realistic.

“Obviously he’s a big favourite and it’s a massive ask for me,” he admitted. “I know it’s going to be tough. I’ve spoken with Jamie about it and I know Canelo’s more favoured than me… But I’ve got the size and where he’s coming in as a huge favourite he might overlook me and see my fight with Callum Smith and think it’s easy. They could do that. He’s a massive favourite, I know that, what happens happens but I will prepare for what he brings.”

Fielding did not watch the recent Alvarez-Golovkin fight live. He was in bed sleeping between baby feeds and caught highlights the following day. But he has seen Canelo once in the flesh before, when he asked him for a selfie in Belfast in 2017 when he was in town to watch Horatio Garcia take on Carl Frampton.

“I’ve always been one of those where you’ve got to see it to believe it but being around Jamie things will happen for you if you keep working,” Fielding said.

“After the [David] Brophy fight I was waiting around and waiting for a date and I was in the gym waiting but you’ve got to be positive and I was thinking something will come.”

But with that over-exaggerated importance on the ‘0’, Fielding would have been at a loss to explain what might have happened the night he fell to Smith.

“I lost in the ABAs but turned pro,” he said. “I built myself up and the opportunity came to fight Callum. I lost that but rebuilt, won a world title before he did and now he’s a champion and might fight at Anfield – so it’s about the right fights at the right time and looking after yourself.

“Now I’ve got 10 weeks to prepare myself and to be the best I can be and I’m going to give it my best and see what happens.”

The cynics will say December 15 a business transaction. Plenty say his WBA regular world title does not even count as a world title anyway. But try telling his bank manager that after December 15. It’s very real currency. Maybe aficionados will have an asterisk by it, and they should because Smith, who stopped Fielding in a round more than two years ago, holds their full title. And the clouds of all-time greats will grow murkier still when references to Alvarez as a two-weight world champion begin to circulate, should Canelo win.

And maybe it’s Smith’s blowout of Fielding that has seen the Mexican’s eyes light up, like a hungry man presented with a steak.

Whatever it is, it again illustrates that some fighters are damned if they do and damned it they don’t. Fielding is making life-changing money and securing the future of his children.

The offer was there. It’s not for him to say ‘No’.

This sport has claimed too many souls that have wound up damaged and penniless, spat out having been unable to fulfil or secure their own dreams.

The announcement had the shock factor. Not just for Fielding but for those who thought Canelo versus Amir Khan and Gennady Golovkin against Kell Brook came out of left field.

Some will draw comparisons with Michael Jennings against Miguel Cotto, Gavin Rees against Adrien Broner, Andy Holligan against Julio Cesar Chavez and Gary Lockett against Kelly Pavlik and there’s an air of familiarity with that role call. Maybe that will be the case. The oddsmakers, who have Fielding around an 8/1 underdog, certainly believe so.

And while I’m not here to make a case for him, I can see why the fight makes sense for both parties.

Because for Canelo, it allows him to stay fresh and keep busy while permitting him to see what he wants to do moving forward – and with what broadcaster. Canelo-Fielding might struggle as a PPV, but it will not be short of suitors in a landscape where networks will happily launch hundreds of thousands, if not millions of dollars, in a high-price auction to secure the services of one of the sport’s superstars, even if it’s for one night only.

It will be the fact that it’s dubbed a title fight that most will have an issue with. That and the fact that some still feel Canelo should still be banned following those positive PED tests.

But for the fighters, Fielding gets to live a dream, Canelo gets to tick over and they both win – even though one will lose.

At risk of repeating myself, so many competitors ‘lose’ in boxing I’m prepared to take the occasional hit for the sake of seeing two fighters doing okay for themselves.

Canelo will be the villain of the piece and he can live with that.

He has always played the long game in his rivalry with Golovkin. If he gets an outing against Fielding while Golovkin faces a possibly punishing assignment with Jermall Charlo – as the Kazakh heads towards his 37th birthday – the chances of Golovkin finally defeating his Mexican nemesis will be reduced further still.

But that’s not Rocky’s lookout. When the twitter timeline eventually settles he will be a wealthy man and his children will want for nothing.
And you can’t put a price on that.

[QUOTE=dukesville;19184556]You say I seem "really mad" huh, over nonsense on the internet? Come on get real...I though when you said "THEIR fighter" as if fans actually have something to do with these athletes, that was some funny sh-t!...don't take this…

[QUOTE=livershot73;19182754]Read it again, did I specify YOU were the one with the selective memory? You seem really mad, so the shoe must've fit for you to come back at me with insults and all butt-hurt....[/QUOTE] You say I seem "really…

[QUOTE=dukesville;19179982]No, not a fool for stating facts but for not understanding who I was referring to when it was obvious. Selective memory when it comes to "their fighter"?...you are a fool...[/QUOTE] Read it again, did I specify YOU were the…

[QUOTE=dukesville;19180943]When you mentioned Smith as an "easy touch", I pointed out how he was an undefeated world champion and you went on about how he was a contender until he beat rocky. Go back and read your own comments and…

[QUOTE=Diego Rodriguez;19181081]So given all this . . . how the heck can you say Fielding is so much better than Vanes? I’m not saying Vanes is better I just don’t get getting worked up to defend a guy you acknowledge…