Ferdinand Kerobyan wanted to make a ferocious comeback after dealing with an adversity-laden loss in March.

He emphatically made his return as the main event of the Golden Boy Promotions card Friday in Pasadena, Calif., knocking down Daniel Evangelista Jr. four times en route to an easy second round technical knockout victory.

Kerobyan (12-1, 7 KOs), a 21-year-old Armenian welterweight from North Hollywood, Calif., had the left hook, straight right hand and body attack working early, beating Evangelista Jr. (20-11-2, 16 KOs) around the ring and dropping him twice in the first round. Evangelista Jr., 29, was saved from further punishment in the opening round when the bell sounded as a concerned referee Jack Reiss watched a disinterested Evangelista Jr. walk back to his corner. 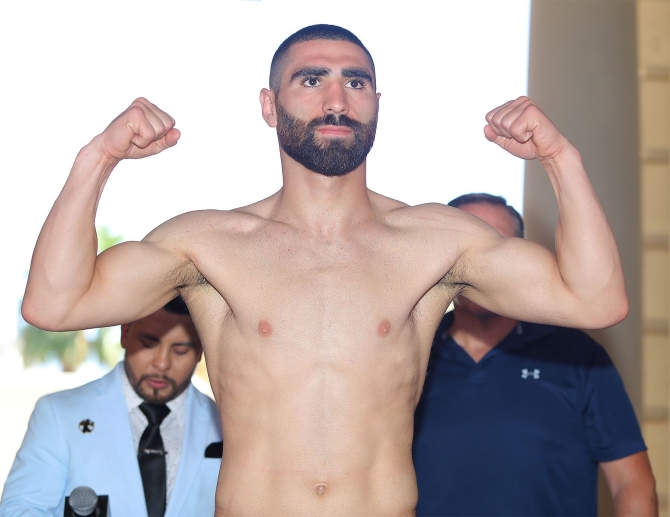 The Mexican fighter returned in the second round and was promptly dropped twice again from a series of rights and body blows by Kerobyan, and Reiss finally stopped the outmatched Evangelista Jr. from taking any further punishment.

Kerobyan, who is managed by Ronda Rousey’s One Fight Management, was fighting for the first time since losing to Blair Cobbs under tough circumstances earlier this year. The touted 21-year-old suffered a cut over his right eye 13 seconds into his fight against Cobbs that required 16 stitches. Kerobyan fought that entire fight distracted with blood flowing from his face en route to losing a close decision.

Cobbs was sitting in the broadcast booth Friday, calling the action with Jonathan Coachman and Douglass Fischer, watching an unmarked Kerobyan return to form. A rematch between the two can be made again down the line should Golden Boy be included to pit its up-and-coming prospects against one another.

The fight and special outdoors attraction took place at Centennial Square in front of the scenic Pasadena City Hall and benefited the Oscar De La Hoya Foundation. Before the fight, De La Hoya, a longtime resident of Pasadena, Calif. who was born and raised in nearby East L.A., donated $100,000 to the city of Pasadena and mayor Terry Tornek in support of the youth and community.

On the undercard, featherweights Emiliano Sanchez (19-1, 12 KOs) and Jose Gonzales (23-9-1, 13 KOs) waged a fearsome fight, standing in the middle of the ring, foreheads touching for most of the night and equally trading thudding shots.

Trained by Joel Diaz and managed by Frank Espinoza, Sanchez got the better of the eight-round affair by landing the more powerful punches, and scored a unanimous decision victory by the scores of 80-72, 77-75, 77-75. By the seventh and eighth rounds, Sanchez started separating himself on the scorecards, landing at will with much success. Sanchez was returning to the ring for the first time since last November, having finally recovered from injuries. For this fight, he moved from his home in Pacoima, Calif. two hours away to Indio to train with Diaz.

In other action, southpaw Bektemir Melikuziev (2-0, 2 KOs) faced veteran Ricardo Adrian Luna Flores (22-7-1, 14 KOs) and promptly battered and bruised the body of Flores and scored a first round knockout. Trained by Diaz as well, the 23-year old Melikuziev also had a knockdown before the bout was finished.

“We did as we planned tonight,” said Melikuziev. “By my fifth fight, I want to fight for a world title.”

“I feel amazing,” said Vargas. “It was a great experience to fight on a Golden Boy card for a second time. Beating an undefeated fighter will do a lot for me. I want to come back soon and fight in September.”

“I give myself an ‘F’ in this fight,” said Gonzalez. “I did poorly. I could have popped my jab more, but I hurt my shoulder early and I couldn’t adjust. I still landed cleaner and harder shots though, so I got the victory.”

Jousce is the younger brother of Joet Gonzalez, who is on the fast track to face Shakur Stevenson for the vacant WBO world featherweight title later this year.

“I feel great,” said Garnica. “I have a great corner and had a great camp, so I felt confident going into the fight. I’m going to continue to work hard and improve my craft.”