Felix Verdejo Shines - Destroys Will Madera in One Round

Felix Verdejo vowed a new beginning and emphatically made good on that promise.

The lightweight hopeful from San Juan, Puerto Rico delivered a statement making performance, icing Will Madera in the opening round of their makeshift main event Thursday evening live on ESPN from MGM Grand Conference Center (“The Bubble”) in Las Vegas, Nevada.

A series of power shots forced Madera to the canvas, where he was unable to beat the count. Referee Robert Hoyle waved off the contest at 2:59 of round one.

“I took my time, came out calm and composed,” Verdejo told ESPN’s Bernardo Osuna after registering his fourth consecutive win. “I wanted to measure him up and see how he hard he hit. Once I figured it out, I went in and did my thing. I let my hands go, but always remained in control.”

The bout was originally slated to serve as the chief support to featherweight contender Miguel Marriaga (29-3, 25KOs). Those plans dramatically changed when Marriaga’s opponent, Philippines’ Mark John Yap (30-15, 15KOs) showed up nearly nine pounds above the contracted limit, thus killing the fight on the spot.

Verdejo and Madera were game for the challenge of headlining the show, though only one fighter delivered. Madera took a patient approach at fight’s start, as his scouting report suggests that Verdejo tends to tire late.

It cost him dearly.

Madera had his say early in the fight, connecting with right hands upstairs. Verdejo remained poised, connecting with jabs and right hands of his own as Madera began to show signs of worse for the wear. A right uppercut at center ring had Madera on wobbly legs, with Verdejo sensing an early stoppage well within sight.

“I took my time, came out calm and composed,” noted Verdejo, who entered his second fight with renowned trainer Ismael Salas. “I wanted to measure him up and see how he hard he hit.

“Once I figured it out, I went in and did my thing. I let my hands go, but always remained in control. 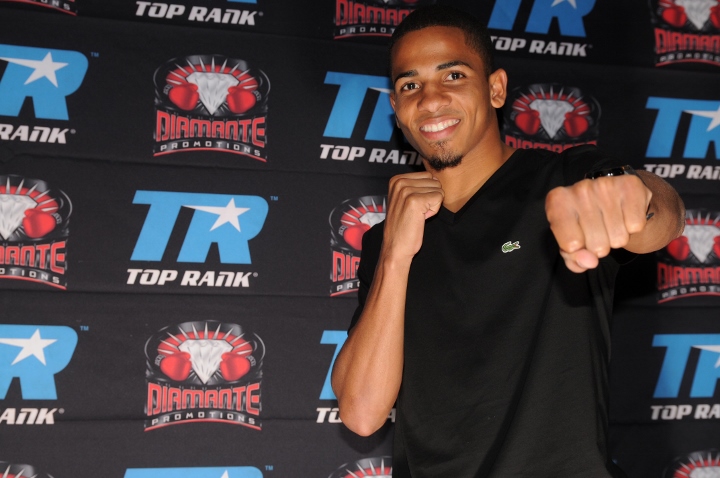 The 2012Puerto Rico Olympian and 2013BoxingScene.com Prospect of the Year closed the show in style, connecting with another right uppercut as Madera was trapped in a corner. A right hand byVerdejo was followed by a left uppercut which sent Madera crashing to the canvas as a final right hand slammed home against his temple.

A mandatory count issued by the referee was interrupted upon the realization that Madera was done for the night. Madera suffers his first career defeat, falling to 15-1-3 (8KOs).

Verdejo improves—in every sense of the word—to 27-1 (17KOs). The win is his fourth straight since suffering his lone career loss more than two years ago. His time spent with Salas for the past two training camps proved to be the difference in a new-and-improved version.

“We worked tirelessly in camp on the technical aspects,” notes Verdejo. “Mainly, though, I just listened. He was telling me ‘Stay calm, stay focused, stick your jab out’ and I did.”

There was once a time when Verdejo’s star was on the rise, believed by the team at Top Rank that they had Puerto Rico’s next superstar in the making. The new penny shine began to fade beginning with a motorcycle accident in August 2016, resulting in an eight-month inactive stretch at a time when his career was due to transition from prospect to contender.

That moment never came, instead complacency and behind-the-scene drama which eventually spilled out into public. Verdejo became embroiled in a still-ongoing legal battle with estranged manager and former trainer Ricky Marquez, with whom he had trained since he was nine years old.

A stunning 10th round stoppage loss to Mexico’s Antonio Lozado in March 2018 was the tipping point in sensing that sweeping changes were needed in his career. Verdejo finally completed the overhaul upon hooking up with Salas, the former Cuban national team head coach who has guided the careers of 19 champions in the pro ranks.

The expectation is for Verdejo to make it an even 20, leaving behind familiarity to join the trainer in his Vegas headquarters for each of their past two camps together.

Thursday’s performance marks the quickest win for Verdejo since a 77-second blitzing of Engelberto Valenzuela in June 2014. The bout took place at New York City’s famed Madison Square Garden on the eve of the annual National Puerto Rican Day Parade.

More importantly, it came in supporting capacity to the island’s last true superstar, Miguel Cotto who made history that night with a stoppage win over Sergio Martinez to win the lineal middleweight championship. Cotto became the first Puerto Rican boxer in history to win world titles in four weight divisions, a feat surpassed only by Amanda Serrano, who has claimed hardware in seven divisions.

Verdejo remains in search of his first major title and has just the target in mind.

“Vasiliy Lomachenko is the number one fighter at 135. He’s the best in the division,” Verdejo acknowledged of his old amateur rival.

The two last met in the 2012 London Olympics, where Lomachenko (14-1, 10KOs) outpointed the Boricua in the quarterfinal round of the lightweight bracket. Lomachenko went on to capture a second straight Olympic Gold medal, along with becoming a three-division titlist and pound-for-pound entrant in the pro ranks.

The Ukrainian southpaw is currently eyeing a three-belt unification clash for his next outing, putting his WBA and WBO belts on the line versus IBF lightweight titlist Teofimo Lopez (15-0, 12KOs). The bout is targeted for the fall, with Verdejo—at the very least—hoping for at least one more fight by then.

After that, the hope is to challenge the winner—especially if it’s Lomachenko.

“We have unfinished business from the Olympics," Verdejo claims, in stating his last piece of past business while otherwise continuing to focus on a brighter future. “The message I sent was that the Felix ‘Diamante’ Verdejo of old, so everyone needs to be ready.

Judging by his win against Vazquez whose a former intern champion and his improvements since then he should beat Ito. Commey on the other hand will be tough to beat . Still worried about Verdejo fading late and his durability.

I'd like to see Verdejo vs. Ito or Commey.

I'm not sold yet on Verdejo's improvements. We saw them for 1 rd against an untested undefeated dude. Doesn't say much yet. I do like the fact that he's trying to get back into it though. His career has mostly…