Felix Verdejo Ready To Go Back To Camp. Wants To Return ASAP

Felix "The Diamond" Verdejo wants to be in condition once the phone rings again to return this year to the ring.

The Puerto Rican fighter will soon return to Las Vegas, Nevada, to resume training in the gym of his new mentor, Cuban veteran coach Ismael Salas, after his recent victory in Verona, New York.

“With or without a date to return to the ring, I will continue working. There are things to improve, ”Verdejo told El Nuevo Día. 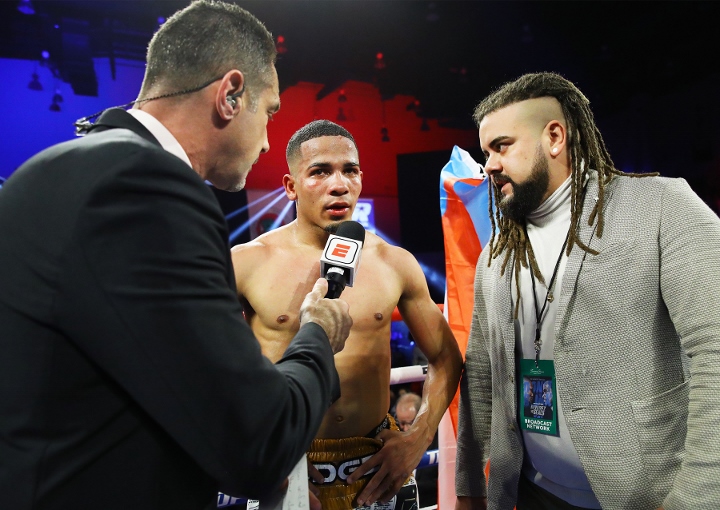 The 26-year-old former Olympian unanimously defeated Mexican contender Manuel Rey Rojas in a 10-round lightweight fight after a nine-month downtime. He improved his mark to 26-1 with 16 knockouts for his third straight win after the first setback of his career in March 2018.

If it were for Verdejo, he would return to action before the summer.

“I would say in March or April, in June. Top Rank has many dates in those months and if they call me I will be there. That's why I want to go to the gym early and be ready all year,” Verdejo said.

On his performance, the vice president of operations of Top Rank, Carl Morreti, applauded the performance.

Verdejo hopes that the desired opportunity to fight for a world title will soon be realized.

With a new air in his career after personal obstacles, the Puerto Rican self-criticized his performance against Rojas.

“I am calm and happy with the result. At least the work requested by Salas was done. I paid enough attention to the plan. I didn't look as bad as I thought. I lacked more aggressiveness, more combinations and lateral movements. Gradually everything will fall into place, step by step,” said Verdejo.

“I am aware that not all opponents are going to fall. Not everyone is going to endure the force that one brings. I can't feel bad if he was able to take the punch. I know he came ready because he came to fight and if he won, he would placed himself in a good position in his career."

As long as the set ups and mismatches kept coming he wasn't serious. Now that he's been KOd by a C class fighter, the protection is obvious even to him. He can't rebuild what he never was, but he wants…

Life without failure isn’t one. A true champion falls, what he does next will be a decide factor in his career... I bet you all so perfect, that you have accomplished and are world champ!!!! Lol

[QUOTE=vaborikua2014;20348860]This kid was promising but his lack of focus and dedication cost him what was looking to be a very talented fighter. This kid is done[/QUOTE] Umm hes 26. How is he done? Lol

[QUOTE=vaborikua2014;20348860]This kid was promising but his lack of focus and dedication cost him what was looking to be a very talented fighter. This kid is done[/QUOTE] They always get serious after the boat sailed. His head was filled with the…

[QUOTE=vaborikua2014;20348860]This kid was promising but his lack of focus and dedication cost him what was looking to be a very talented fighter. This kid is done[/QUOTE] Unless pushed outside his comfort zone I think Verdejo will stay inside his comfort…