Felix Verdejo: No More Time To Look Back, Only Ahead

It’s impossible to change the past, though Felix Verdejo continues to do all he can to learn from it in order to provide a brighter future.

The 2012 Olympian from San Juan, Puerto Rico and current lightweight hopeful has a chance to take a major step forward with his upcoming bout versus unbeaten Will Madera (15-0-3, 8KOs). The two collide Thursday evening in what now serves as the headlining act of Top Rank Boxing on ESPN, live from MGM Grand Conference Center in Las Vegas.

“I know things in my career haven’t gone the way I wanted,” Verdejo (26-1, 16KOs) admitted to BoxingScene.com. “I made some mistakes in the past, but there’s no more time to look back, only ahead.” 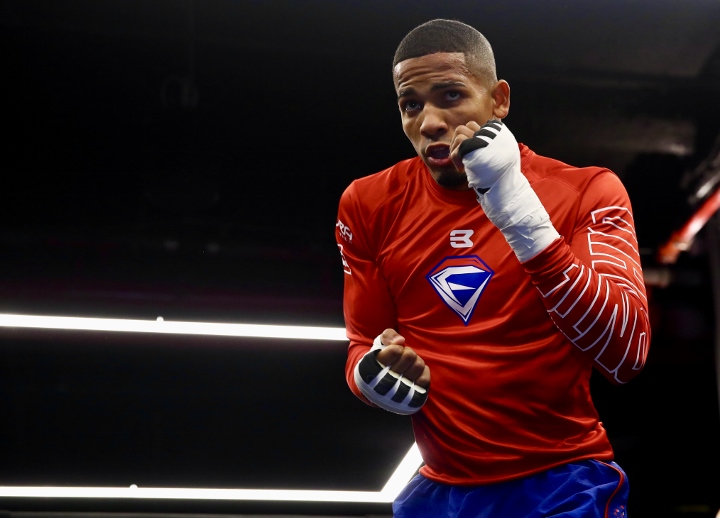 Verdejo represented Puerto Rico in the 2012 London Olympics, prior to turning pro under the Top Rank banner later that year. The charismatic Boricua rapidly advanced to rising prospect, in fact earning recognition by BoxingScene.com as the 2013 Prospect of the Year.

His career eventually slowed, in part due to an ongoing legal battle with estranged manager and former trainer Ricky Marquez. There was also the part of perhaps getting caught up in the hype, as the next big superstar from his boxing-rich island.

The bottom fell out two years ago, suffering his lone career defeat in a 10th round upset stoppage at the hands of Antonio Lozado in March 2018. Four wins have since followed, including a complete team overhaul as Verdejo will enter the ring with renowned cornerman Ismael Salas for his second straight fight.

The move to Salas— the former coach for the Cuban amateur team who has trained 19 world champions in the pro ranks—meant heading to Las Vegas to set up training headquarters. Verdejo was fine with the makeover, as he remains more focused on creating new memories rather than sticking with what’s always remained most familiar to him.

After all, the latter never produced the desired effect when it mattered most.

“It will be different to fight in 'The Bubble' at the MGM Grand in Las Vegas without my fans,” notes Verdejo of appearing in front of a crowdless venue. “But I have no doubt that I will carry in my heart, my family, my people of Puerto Rico, and all who have supported me throughout my career.

“July 16 marks my return to the ring against Will Madera in what will be my second fight with my new team. This is a great opportunity to demonstrate the progress resulting from my work. I have renewed motivation to realize my dream of becoming a world champion. That’s the goal.”