The once-dynamic contender did return to Madison Square Garden, the site of his lone loss, to win a fight. Puerto Rico’s Verdejo defeated Costa Rica’s Bryan Vasquez by unanimous decision in a mostly monotonous 10-round lightweight bout on the Terence Crawford-Amir Khan undercard. 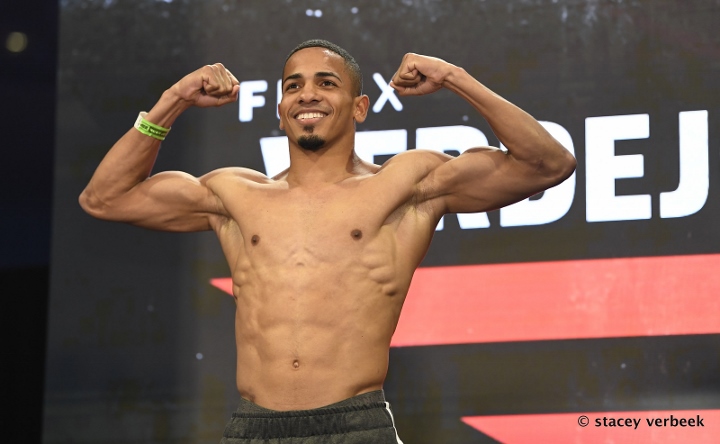 Bob Arum, the promoter that once predicted Verdejo would become Puerto Rico’s next Miguel Cotto, publicly questioned Verdejo’s dedication to training after Lozada defeated him.

Verdejo, 25, has now won each of his two fights since the Lozada loss. He knocked out Yardley Cruz in the second round of his comeback bout, November 10 in Guaynabo, Puerto Rico.

Verdejo and Vasquez finally let their hands go in the second half of the 10th round. Those final 90 seconds marked the most compelling stretch of a largely boring bout.

Verdejo connected with two right hands early in the ninth round. Vasquez took those shots well and waved Verdejo forward.

Late in the ninth, Vasquez even rested one arm on the top rope and invited Verdejo to attack him.

The sixth, seventh and eighth rounds mostly were nondescript. Neither fighter really landed consequential punches in those rounds.

Verdejo remained on the offensive in the fifth round, but both boxers were adept at slipping and blocking punches during much of those three minutes. Verdejo landed two straight right hands and a left to Vasquez’s body late in the fifth.

Vasquez spent much of the third and fourth rounds missing Verdejo with right hands. At some point in the second half of the fourth round, though, an accidental clash of heads opened a cut beneath Verdejo’s left eye.

Verdejo controlled the distance during the second round, but he didn’t land any punches that affected Vasquez.

Verdejo looked really average - he's not progressing in any way. Everything he does is predictable, with no special effects, and way too easy to hit. All Top Rank can do is keep him fighting at the same level, else…

Judges like Verdejo. He was on his way to robbing that cab driver that beat him a couple years ago before the cabbie stopped late in the last round. That fight wasn’t even close and he was ahead on 2…

[QUOTE=Johnny Utah;19676323]There Keith Idlec goes again calling fights from Last Rd to First .. He can’t help himself?! Looser[/QUOTE] Right? I don't know why it occurred to this guy that it makes sense to tell the story backwards.