Fedor Chudinov plans to hold his next fight on September 12 in the Russian city of Khimki, according to promoter Vladimir Hryunov.

“Today or tomorrow we are waiting for the resolution of the World Boxing Association (WBA) on the status of Fedor Chudinov," said Hryunov to Tass. "According to our plans, Fedor should receive the status of a mandatory contender for the fight with Saul Alvarez. He will be back on September 12 in Khimki."

Chudinov is still on a schedule to fight on August 22 against Ronny Landaeta in Kazan, Russia. No word if that return is going to be pushed back.

The 32-year-old Chudinov has 22 wins (15 by knockout) and two defeats. He is a former WBA super world champion. 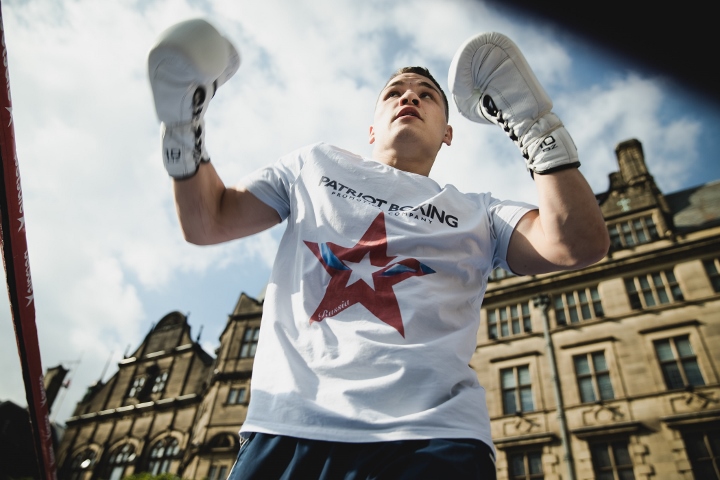 IN OTHER NEWS: The full card is taking shape for the historic “DETROIT BRAWL AT THE LEGENDARY KRONK” event at Detroit’s Kronk Gym on Thursday, August 20, 2020.

In the night’s eight-round middleweight co-main event, Russian middleweight Timur Kerefov (8-0, 4 KOs) of Detroit via Shalushka, Russia, takes on Kansas City, Missouri veteran Calvin Metcalf (10-4-1, 3 KOs). The fight will be the US debut for Kerefov, a highly touted professional prospect and former heavily decorated amateur who won several important tournaments and 298 of his 310 unpaid fights. Already designated a prestigious Master of Sports in Russia, the southpaw Kerefov is blessed with excellent hand and foot speed and the fast-twitch reflexes that only come from a lifetime in the sport.

Also appearing will be undefeated super middleweight prospect Cruse “Hitman” Stewart (7-0, 6 KOs) of Cedar Rapids, Iowa, in a six-rounder against rugged Mexican veteran Jose Manuel Medrano of laquepaque, Jalisco, Mexico. With over 400 amateur fights (325-80), the promising Stewart was a member of team that included notable professionals including Shawn Porter, Gary Russell Jr., Sadam Ali, and former heavyweight champion Deontay Wilder. Stewart was a seven-time National Golden Gloves Qualifier and a runner-up in 2017, as well as runner-up at the Augusta Open Invitational, losing to current boxing superstar Danny Garcia in the finals.

In a notable women’s match-up, Houston via Brooklyn light heavyweight Danielle Perkins will make her highly anticipated six-round pro debut against undefeated fellow prospect Monika Harrison (2-0-1, 1 KO), also of Houston. The hard-punching Perkins was a four-time national champion as an amateur, as well as a Continental and Spain Bexem gold medallist. The former college basketball player improved on her 2018 bronze medal and became the first American amateur world champion in three years by defeating world champion Yang Xiaoli of China 5-0 in October of 2019.

In a four-round heavyweight battle, Tulsa, Oklahoma, heavyweight Jeremiah Milton will make his professional debut against an opponent TBA. The 6’ 4″ 230-lb. 26-year old Milton was a Silver Medalist at the 2019 Olympic Trials, the 2019 Western Qualifier Champion, and took Bronze at the 2018 US Nationals.

Additionally, junior middleweight Morris Young Jr. is set to bring his fan-friendly, pressure style of boxing with his four-round debut against also debuting San Jose, California native Andrea Topping. A 2019 National Golden Glove Champion, Young possesses a grit and tenacity that embodies his hometown of Saginaw, Michigan. His relentless approach in the ring helped lead him to the top of the amateur ranks, earning a spot at the 2019 USA Olympic Trials.

Opening up the action will be a middleweight four-rounder featuring Detroit’s Marlon Harrington (1-0, 1 KO) looking to spoil the pro debut of San Antonio’s Ricardo Medina.

No local fighters with any notable fights; B.S. for real they can send Salita back to NY, where they would love to see him fail.

I'd like to see Chudinov face the undefeated Kazakh, Yerbossynuly. Maybe winner gets Morrell or a firefight with Lemieux

This guy ate some serious shots against Groves!

Chudinov might end up getting the call to face canelo. SMH