Tempers have flared throughout the promotion for several bouts on the card, but in the end the main players did their job and made weight for Friday's Philly- and Irish-themed show at Liacouras Center in Philadelphia, Pennsylvania.

Topping the DAZN-streamed bill, Tevin Farmer becomes the first Philly-born boxer in 16 years to defend a major title in the City of Brotherly Love as he faces unbeaten Jono Carroll of Dublin, Ireland. The pairing has been contentious from the start, but both can finally bring their rivalry to the ring after making weight for their 12-round super featherweight title fight.

Farmer (28-4-1, 6KOs) tipped the scales 129.7 pounds at for the third defense of the 130-pound crown he acquired just last August. The 28-year old southpaw is coming off of a 12-round win over Francisco Fonseca last December, which was preceded by a 3rd round knockout of James Tennyson in October, with both airing live on DAZN. 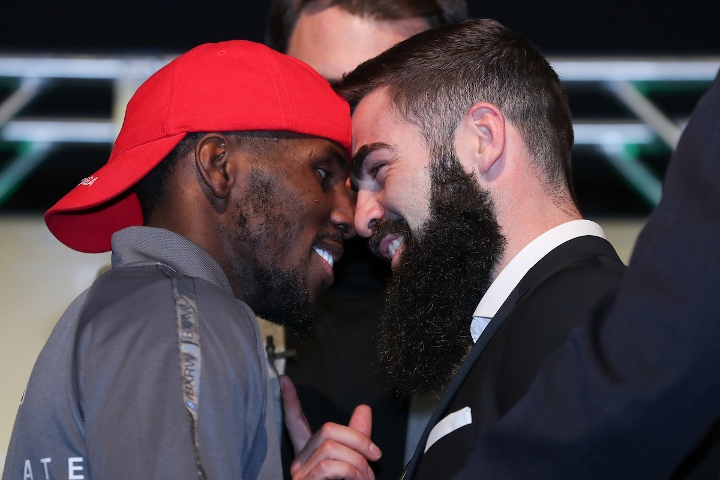 Carroll (16-0-1, 3KOs) checked in at 129.3 pounds for his first career title fight, as well his U.S. debut. The 26-year old southpaw is coming off of a disappointing 12-round draw versus Guillaume Frenois in their title eliminator last December, but was advanced to the title stage after Farmer decided he wanted to remain active and enjoy a homecoming.

The co-feature slot sees the latest step in the already incredible career of Katie Taylor. The two-time Olympian for Ireland—who captured Olympic Gold in 2012—and reigning WBA and IBF titlist looks to add a third belt to her arsenal in a 10-round lightweight unification clash with undefeated WBO beltholder Rose Volante.

Taylor (12-0, 5KOs) weighed 133.9 pounds for the contest, with eyes set on a showdown with WBC titlist Delfine Persoon in June should she emerge victorious here. In her way is Brazil's Volante (14-0, 8KOs), who weighed 133.2 pounds for her U.S. debut.

The bout will mark the sixth defense of at least one title for Taylor, who claimed her first strap in Oct. '17 in just her seventh pro fight. She is coming off of a 10-round win over former amateur rival and previously unbeaten 130-pound titlist Eva Walhstrom last December.

Volante makes the third defense of a title she first claimed on the road in a 10-round win over Brenda Karen Carbajal in Dec. '17 in Argentina.

Gabriel Rosado and Maciej Sulecki both easily made weight for their 10-round middleweight clash which carries title fight implications.

The winner stands a favorable chance of landing a shot at WBO middleweight titlist Demetrius Andrade in June.

[QUOTE=W1LL;19584021]Lol. It's in the contract Jono has to shave before the fight. He will give this fight his all, just think he'll be really up against it fighting Farmer in his hometown. I see this going one of two ways.…

I like what Carroll said to Ak and Barak about going to the body. He is right that Framers recent opponents have been head hunting too much. I hope he does what he says and goes to the body.

[QUOTE=Adamsc151;19583989]Farmer will be going to the body; no way is he hurting that chin with all the cushioning that beard provides, lol[/QUOTE] Lol. It's in the contract Jono has to shave before the fight. He will give this fight his…

Farmer will be going to the body; no way is he hurting that chin with all the cushioning that beard provides, lol

Did someone just say DAZN 'headliner'? No? Ah, my mistake, I was clearly mistaken for a moment.