For hardcore boxing fans, this past Saturday felt as close to normal as a day has felt in quite some time. By 10:00 PM ET, boxing writers and enthusiasts on everyone’s timeline were ready to live tweet, and two boxing broadcasts began, one in Nicaragua on Facebook and ESPN Deportes, and another in South Korea streamed live on YouTube.

In her weekend New York Times article about the return of cocktail hour in the age of coronavirus, Ginia Bellafante wrote “the need to punctuate the end of the day at a moment when time feels so static has left me looking for the exclamation points.” For boxing fans, fights on Saturday night are the exclamation point on every week. Both figuratively and literally, the fights are their cocktail hour.

As everyone settled in and cracked their Tecates and Coronas, or maybe poured a splash of Canelo-branded Hennessy, they got a glimpse of what might be boxing’s “new normal” once the sport re-starts in a more widespread way.

The event in South Korea took place at the Legend Boxing Gym in Gimpo, and was exactly what you would envision it would look like if your local boxing club just happened to have professional bouts going on as everyone else went about their business. The camera was arranged just above a row of treadmills, and the judges and ring announcer seemingly sat together at a long table draped in a plaid cloth. In the background, a few fighters could be seen skipping and shadowboxing.

There was no pageantry whatsoever. The first action was a sparring session between two local fighters, both in t-shirts and headgear. Once it was time for the actual fights to begin, light heavyweight Kyung Min Kim (1-2-1) simply took three steps from where he was standing and entered the ring to no music and no applause. His opponent, Woo Hyun Ma (0-2), was waiting by the treadmills, and had to wiggle past the lone camera to step into the ring. The two light heavyweights engaged in what could best be described as a sloppy novice brawl, which ended when Ma began taking combinations to the head with his hands at his side, prompting the referee to stop the bout in the fourth. It would be the best and most competitive bout of the three-fight card.

South Korea has risen as the model country that all others aspire to when it comes to its handling of the COVID-19 outbreak. Widespread testing and tracking measures have stymied the spread of the disease and kept the country’s number of daily cases relatively low. The country even managed to hold a national election with record turnout. Many aspects of daily life have been reopened under what the government is calling “everyday life quarantine,” a set of guidelines to help prevent a second wave. Under these relaxed restrictions, the country’s national baseball league is set to re-start on May 5, and events such as the fights in Gimpo have been allowed, but mass gatherings are still “limited.” According to an article by Mary Hui of Quartz on April 24, those who attend sporting events “are asked to avoid cheering too loudly (because of the risk of spraying saliva) and touching other people, like hugging and giving high-fives.”

Given the environment it took place in, the bouts in South Korea felt strange, but not uncomfortable. If you watch enough boxing from around the world, you’ve seen your share of cards staged in local gyms. And even though these took place during a pandemic, knowing the careful attitude being taken by government and citizens alike in South Korea, one didn’t get the sense that they were watching something irresponsible.

The event in Nicaragua had a different feeling, primarily because of the country in which it was staged. Nicaragua’s handling of the crisis has been panned by Amnesty International and Human Rights Watch. Its president, Daniel Ortega, hasn’t been seen in public in many weeks, and the government is actively promoting large scale public events. It has gone a step further, according to numerous reports, in dissuading citizens from social distancing and the wearing of protective masks. 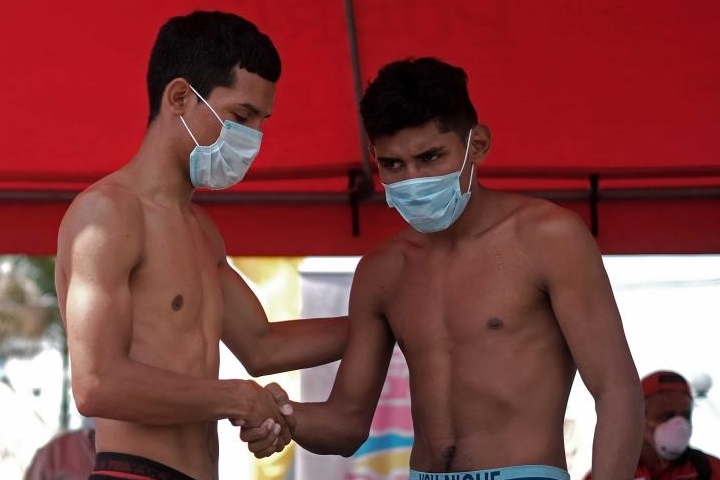 Government propaganda being distributed within the country has even used boxing analogies. According to Catholic news site Crux, one leaflet read: “The virus is no rival for Nicaragua, we are a people of God. Simply by having the commandant and the companion at the front, we have a KO on the first round.”

Sports at all levels have continued on in Nicaragua, and the athletes who have opted not to participate have been chastised or punished. When the parents of youth basketball players chose to not let their children play in a scheduled national tournament, the director of sports in the capitol city Managua blasted them for being “guided by fear and disinformation,” according to James Wagner of the New York Times. One baseball player who decided to not to take part in ongoing games in the national league for health and safety reasons was suspended without his monthly pay of $200.

It is within this environment that Saturday’s fights at the Alexis Arguello Gymnasium in Managua took place. Though, to the credit of lead promoter and former two-division world champion Rosendo Alvarez, the handling of the event was seemingly at odds with the denialist behavior being displayed elsewhere in the country.

In a broadcast segment aired outlining the safety measures in place, Alvarez said: “In God’s name, everything will be okay. Like we can see, there’s a line of people, but we’re following hygiene protocols to enter the venue. We have accomplished what we promised; everyone is in here wearing face masks, we’ve provided hand sanitizer and we’ve cleaned the soles of their shoes. Thanks to God, no one has given us any problems.”

Everyone in the venue, including those working the corners of the fighters, the referees, and even the commentators wore masks throughout the night. The fans were at least 62 feet away from the ring, and only one in every ten seats were filled.

In an interview given to The Associated Press earlier in fight week, Alvarez said “Nicaragua is a poor country, and the boxers have to eat.” Though Alvarez himself has propagated the absurd theory that “nobody from within the country has been contaminated” (its official count of three COVID-19 deaths is widely discredited due to a lack of testing), at least he hedged his bets with safety protocols when it came to his own event, and his point about the individuals’ need for income remains valid. In a country in which the leadership is effectively suggesting that Nicaraguans are impervious to the virus so long as they believe in God, and as a result, little in the way of protection, let alone economic aid is being offered, what is a fighter to do? In this respect, it is reasonable to view boxers as victims of governmental failure, rather than reckless flouters of scientific and medical advice.

If you were able to ignore the circumstances for half an hour or so, the night’s main event, a rematch between lightweights Robin Zamora and Ramiro Blanco, was a good, competitive scrap between two journeyman-caliber fighters. Zamora picked up his second straight victory over his rival with a close unanimous decision—scores were 78-74 and 77-75 twice.

Ultimately, the night felt like a test run for what boxing globally might look like when it comes back on a regular basis. It’s easy to see how what would have previously been a well-attended club show featuring less experienced fighters would wind up simply in a closed gym and streamed somewhere. It’s also conceivable that the concession made for higher profile events is something similar to what happened in Nicaragua, with mandated sanitary measures and distancing within the venue.

Unfortunately, the current economic model in boxing wouldn’t allow for either of these scenarios to be profitable for promoters, with ticket sales being imperative to financial success in almost all cases. However, the world is adapting, and supposing we adopt the South Korean way of “everyday life quarantine” as we’re weened back into society but still spending the bulk of our time at home, perhaps streaming and television rights will become more lucrative.

Until then, we wait for another fight, another jolt of normalcy, however abnormal—and dangerous--it feels at the moment.

Good article but 1 person every 10 seats won't work for the US, UK, Canada, etc. Without butts in every seat all fighters, promoters and networks will be taking a significant pay cut. This might be fine for the first…

Both Nicaragua and Sokor are good people.:boxing::kabong: