Evander Holyfield: I Could Fight In Any Era Of Heavyweights

Four-time heavyweight champion Evander Holyfield was an undersized fighter who beat some of the sport’s all time greats in boxing’s glamour division.

“The Real Deal” believes he would have a real chance against any heavyweight in history.

“I was a boxer, and because I knew how to box real well, I could adapt to different styles. I could have fought in any era. I could be in there with any heavyweight,” Holyfield told BoxingScene.com in an interview. “I knew how to fight inside and outside. I knew how to slip shots of longer guys. I had decent hand speed. I moved really well and had good footwork. I had a lot of combinations and threw a lot of punches. I hurt people. I was a student of the game. This allowed for me to be in the era that I was.” 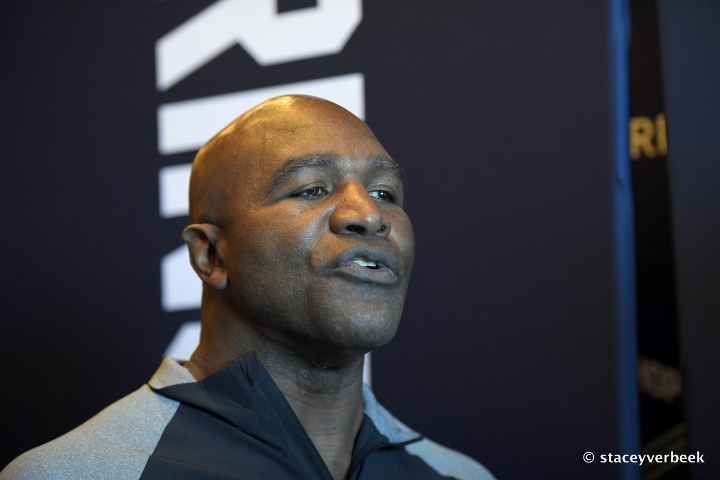 Holyfield seemingly lost every fight on paper when it came to the measurables on the tale of the tape, yet, the former cruiserweight king’s dossier dons wins over the likes of Larry Holmes, George Foreman, Mike Tyson (twice), Riddick Bowe, Buster Douglas, Ray Mercer, Michael Moorer, Hasim Rahman, John Ruiz, as well as a draw with Lennox Lewis.

“I never was a big guy. I never was an aggressive [personality] guy, but I could be aggressive. It wasn’t my first nature,” said Holyfield. “When boxing is all you’ve done your whole life, that’s what makes you successful. There were a lot of things I didn’t have, but I was good at boxing. My mother told me, ‘you have to be thankful for what you can do, and stop worrying about what you can’t do.’”

At the age of 57, Holyfield wants to return to the ring and fight exhibition fights for charity, namely with Tyson, but he said he does not have the itch or desire to fight professionally against an active heavyweight fighter.

Holyfield realized his time in the sport was winding down in 2008 at the age of 46 when he was sparring former heavyweight champion Andy Ruiz, who was 19 years old at the time.

“I realized [retirement] years ago. I had reached my goals. I was a small heavyweight. Today the guys are a lot bigger, and their reflexes are a lot faster,” said Holyfield. “I did good [against Andy Ruiz], but I thought I was supposed to beat him [in sparring]. I realized that something has to be wrong for a guy to look like that and challenge me.”

[QUOTE=chirorickyp;20573995]You're right. The juice alone doesn't do it otherwise all we would need is "muscle in a pill" and everyone would look like Lee Haney without picking up a weight. It's all about putting in all the extra hard work,…

He's right, he certainly could. He'd be a champion in any era.

[QUOTE=Blond Beast;20573644]I’ve had this talk before and u are right. Roids do help with recovery in ur muscles, letting you get back to another cardio session sooner. But that also means it’s the extra cardio sessions ur doing that’s increasing…

[QUOTE=chirorickyp;20569153]Actually the roids Bonds took improved his vision where the ball slowed down so to speak. I am not making this up. I believe it's called the clear. That was why he was able to hit the bad pitches they…

Yeh, that is why all those 90s heavyweights looked so muscular ( except Foreman). They were probably all on PED-s.