The fight ended at just 92 seconds into the first round with a devastating body shot as Estrella was unable to survive the entire 10-count. 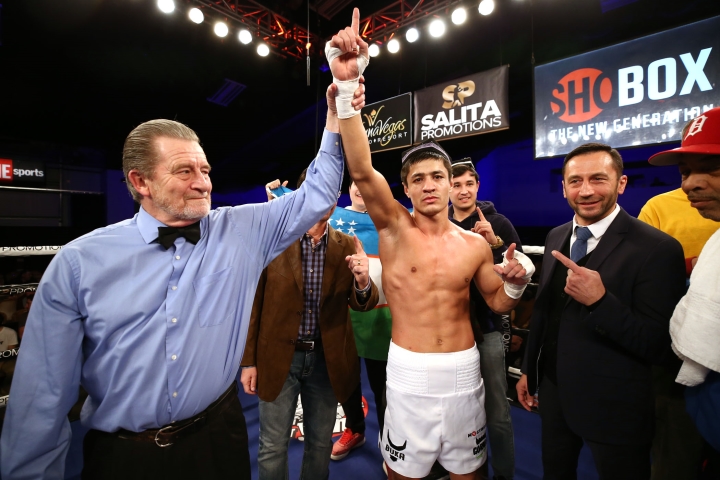 “I just saw the window to the body, so I threw the shot,” said Ergashev, who is ranked in the top-15 in three of the four major sanctioning bodies.

“I wasn’t planning to knock him out in the first round. I wanted to get some rounds in. The guy is durable and experienced, so I thought I would, but when I saw that opening, I had to take it.

“I knew it was over the second it landed though. I knew he would not get up from that. No one could. That was a message to the super lightweight division. It’s Shoh Time! No matter where I fight, it is always Shoh Time.”

After Ergashev landed the knockout blow, Estrella of Fort Worth, Texas, went down writhing in pain from the left uppercut to the liver and unable to continue.

“I started moving and tried using my jab, but he was very quick with that punch,” Estrella said. “He just punched me very hard in the stomach and I was paralyzed on the canvas. I tried to stand up, but I couldn’t hear the referee counting. I couldn’t hear anything, and I couldn’t move. It was a hell of a shot.”

that was a Durán like shot to the body

[QUOTE=_Rexy_;20332978]I haven’t seen someone react like that to a body shot since Golovkin/Macklin. I don’t think anyone expected him to get up lol[/QUOTE] Yeah, there are certain body shots you remember like the Macklin one. He was game but when…

I haven’t seen someone react like that to a body shot since Golovkin/Macklin. I don’t think anyone expected him to get up lol