Estrada: No Doubt I'm a Better Fighter Than Chocolatito, Cuadras

Juan Francisco Estrada is confident that he is a better boxer than countryman Carlos "Principe" Quadras and four division champion Roman "Chocolatito" Gonzalez.

On a historic night on September 9 in California, plans are being finalized to showcase four of the best super flyweights in the world - with Estrada facing Cuadras for the interim-WBC title, and a rematch between Gonzalez and Thai fighter Srisaket Sor Rungvisai - for the full WBC title.

The winners of both fights will collide at a later date, pursuant to an order issued by the World Boxing Counci. 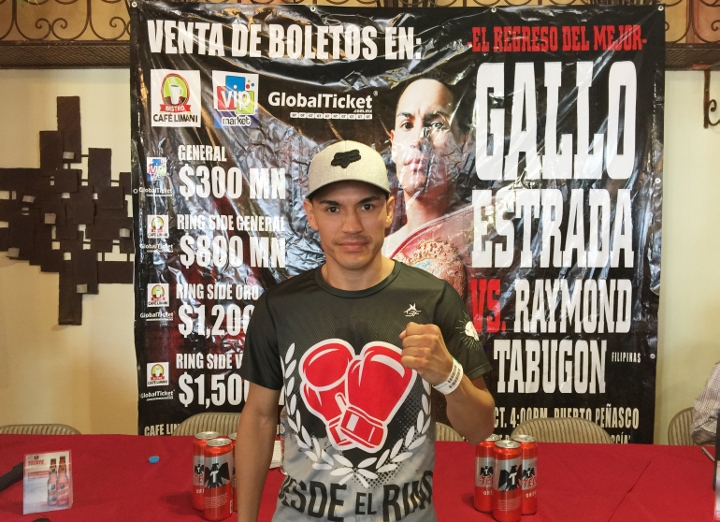 Estrada has built up a streak of 9 consecutive wins since his last defeat, which took place on the night of November 17, 2011, against Chocolatito.

"I have no doubt that I am a better fighter than Cuadras and Chocolatito Gonzalez and I will prove it in the ring.... with Roman I already did that, now I will with Carlos. I train to win," said Estrada.

"We have already observed Cuadras, he is a good fighter who will give us a great fight on September 9. He is one of the best fighters in that weight division, very talkative. I hear everything he's saying but that's what he says about all of the fighters he's facing. But everything he says, he still has to show up in the ring. It's easy to say things, but you're going to have to prove it inside the ring.

[QUOTE=Randall Cunning;17757877]Yafai wants to fight Rungvisai. There was an article on here a while back, said Rungvisai people got in Hearn to help with the Gonzalez negotiations, Hearn said he wanted to put in a stipulation that the winner fights…

[QUOTE=1hourRun;17757797]A yo but its real funny how Kal Yafai, Cuadras and Estrada dont even mention Rungivsai - they know whos still the man KING CHOCOLATITO![/QUOTE] Yafai wants to fight Rungvisai. There was an article on here a while back, said…

Better fighter? you barely even fight. Its been like two years since you had a semi-meaningful encounter vs. Tyson Marquez, meanwhile RG been winning FOTY and another world title in his fourth weight class becoming the second man in history…

Estrada could beat Gonzalez, but I don't give him as much of a chance against Cuadras or Rungvisai. But that isn't to say that all four wouldn't be good matchups for each other. In fact, likely the 4 best in…

I just hope the rest of his career doesnt get plagued by hand injuries. Estrada so good amd so exciting , it would suck to see a fighter like him hold back due to a handicap. Estrada has a throwback…