Juan Francisco Estrada claims he was not at 100 percent when he faced Srisaket Sor Rungvisai on Feb. 24 of last year. Imagine what Estrada could have if he was at his best.

Estrada is confident he will wrestle the world title belt away from the Thai fighter tonight when the two will square off at The Forum in Inglewood, California. The 12-round bout will headline a Matchroom Boxing card (DAZN, 7:30 p.m. ET/ 4:30 p.m. PT).

Sor Rungvisai’s WBC junior bantamweight title will be on the line. 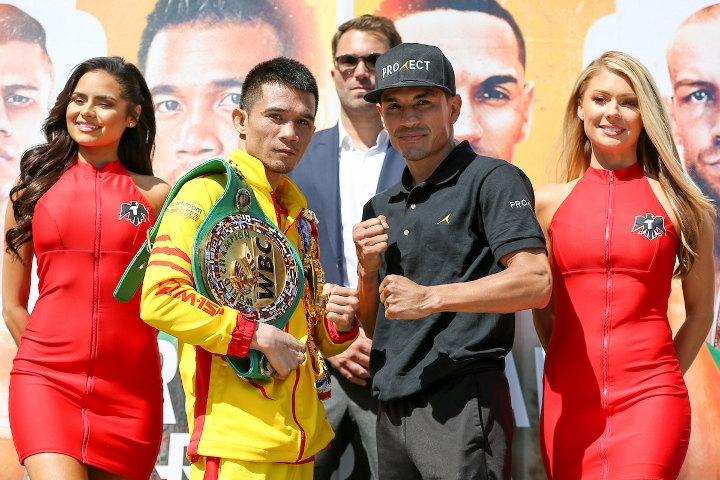 Estrada came up short in their first bout, which also took place at The Forum, losing by majority-decision in what turned out to be one of the best fights of 2018.

The 29-year-old Estrada (38-3, 26 knockouts), who resides in Hermosillo, Sonora, Mexico, has won back-to-back fights since the loss to Sor Rungvisai, including a seventh round knockout victory over Victor Mendez on Dec. 8 in nearby Carson. He is the mandatory challenger to the WBC title.

After studying film of the last fight, Estrada believes he will have the intangibles and pedigree to defeat Sor Rungvisai.

“I learned I should not get sucked into his fight,” Estrada told BoxingScene Wednesday afternoon. “I should have started letting my hands go earlier during the fight. I’m not bothered over the result from the last fight. I’ve prepared for the best Sor Rungvisai and whatever he plans for me (tonight).”

Estrada confirmed to BoxingScene that he suffered ailments and injuries that occurred during training leading up to the first fight.

The injuries may or may not have played a factor during the first fight, but Estrada believes they did. Estrada went through training camp for the rematch with no health issues, which he believes will be a significant difference from the first fight.

“I was not at 100 percent during the first fight,” said Estrada, who is promoted by Zanfer Promotions. “I had problems with my knees. During training camp, I was not able to do any sprints. I felt pain in my back about a month before the fight. I had no issues with my health during the first half.”

Estrada would like to unify the junior bantamweight division. He is hopeful of a unification fight between WBA titleholder Khalid Yafai of England or even IBF titleholder Jerwin Ancajas of the Philippines.

Contenders Aston Palicte and Kazuto Ioka will fight for the vacant WBO title on June 19.

“I’ve been fortunate enough to not drink or smoke, which I believe has allowed me to fight as long as I have. Young boxers don’t take care of themselves the way that they should.”

“I would like to defend the title once then being to unify the division by facing all the world title belts. It’s not so much about the money, but more because I want to be considered amongst the pound-for-pound best fighter in boxing. I’m ready for the rematch (Friday).”

The way he was connecting at will during the last few rounds of the first fight is a clear sign Estrada has the skills to beat up Rugvinsai. But he must also be defensively responsible

I have a gut feeling Estrada takes it this time

And the new War Estrada

I think Estrada will win this time. The first fight was awesome!! This one should be no different.