Estrada: I Had A Knee Injury In Cuadras Fight; Result Of Rematch Will Be Very Different

A right knee injury hindered him in that 12-round super flyweight fight three years ago, though, which gives Estrada confidence that he’ll defeat Cuadras easier in their 12-round rematch Friday night. Estrada’s 10th-round knockdown of Cuadras was the difference on all three scorecards (114-113, 114-113, 114-113) the night Estrada overcame Cuadras by unanimous decision in September 2017 at StubHub Center in Carson, California.

“I know that it was a good fight, but I was injured in that fight,” Estrada told BoxingScene.com through a translator. “I didn’t have 100-percent preparation. I couldn’t do all the exercises I normally do during training. In the fight, I felt like my knee was hurting me. For this fight, I feel very good. My preparation was excellent. The result will be very different than the first fight.” 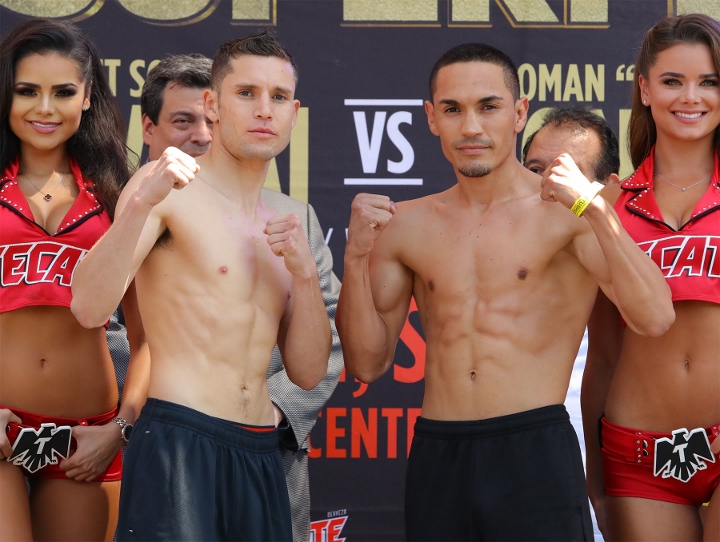 Estrada will make his second defense of the WBC 115-pound championship he won from Srisaket Sor Rungvisai in April 2019 when he encounters Cuadras. DAZN will stream Estrada-Cuadras as the main event of a six-fight card from TV Azteca’s studios in Mexico City (7 p.m. ET; 4 p.m. PT).

The 32-year-old Cuadras (39-3-1, 27 KOs) has won three straight fights entering his shot at Estrada’s title. That streak began once Cuadras lost a 10-round majority decision to McWilliams Arroyo (20-4, 15 KOs) in the fight after Estrada eked out a victory over him.

Rumors swirled last week that Cuadras failed a COVID-19 test and would withdraw from his rematch with Estrada. He has since repeatedly tested negative to keep it intact.

“When I first noticed that, I was worried because everyone was waiting for this fight,” Estrada said. “I was training for Cuadras. But after I talked with Juan Hernandez, my promoter, I calmed down because they were already looking into another option. But fortunately, Cuadras tested negative.”

If Estrada and Gonzalez win Friday night, they expect to fight each other next in what would be Estrada’s second consecutive rematch. Gonzalez, who was undefeated at that time, defeated Estrada by unanimous decision in their 12-round, 108-pound championship match in November 2012 in Los Angeles.

This should be a good one. Estrada is one of my favorite boxers. Seems like a good dude on top of being a bad a$$ in the ring.