INGLEWOOD - Juan Francisco Estrada fought exactly like a ‘Gallo’ (which is spanish for ‘rooster’) Friday night.

Rather than box from distance and sit on a wide lead, Estrada was more than willing to stand and trade against the hard-hitting Srisaket Sor Rungvisai late in the fight.

Estrada built an early lead, then hung on to defeat Sor Rungvisai by unanimous decision before a boisterous and partisan crowd of 5,127 at The Forum.

With the victory, Estrada won the WBC junior featherweight title.

Both fighters fought a classic in their first fight back in February of last year, which Sor Rungvisai won by majority decision over 12 rounds.

Estrada stated he was not at 100 percent for the fight, claiming he suffered from a knee injury that did not allow him to do sprints during training camp. Estrada also claimed he had a back injury about a month before the fight.

Sor Rungvisai, who won the title from Roman ‘Chocolatito’ Gonzalez in March of 2017, fought twice in between the Estrada fights, with his most recent outing taking place on Oct. 6, defeating Mexico’s Iran Diaz over 12 one-sided rounds.

In his last bout on Dec. 8, Estrada, who resides in Puerto Penasco, Mexico, stopped Victor Mendez after the seventh round of a stay-busy fight in nearby Carson.

Estrada was the aggressor from the opening bell, mixing his attack with combinations to Sor Rungvisai’s head and body. Estrada was at his best when he initiated exchanges, moving out of Sor Rungvisai’s punch range to prevent him from countering. 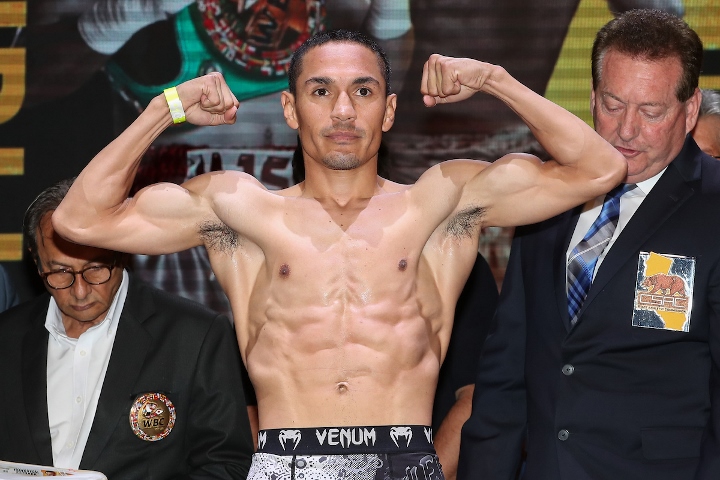 Sor Rungviasi spent most of the first half of the fight fighting from a conventional stance and not from a southpaw one. The strategy put Sor Rungvisai at a disadvantage as he looked methodical and sluggish.

“He started from the conventional stance early on, which did surprise me,” said Estrada after the fight. “He’s a southpaw, so I just boxed effectively.”

Sensing he was down on the scorecards, Sor Rungvisai finally began letting his hands go more in the eighth round. Sor Rungvisai closed the distance, getting into punching range and firing lead hooks or crosses to the head of Estrada.

Both let their hands go during the final two rounds, with Sor Rungivisai going for broke. Just like in the 12th round of their last fight, both fighters traded combinations in the center of the ring, producing all-out exchanges until the final bell sounded.

“I wanted to demonstrate to the fans that I prepared to my best,” said Estrada of the 12th round. “I was able to do that.”

Sor Rungvisai, who resides in Si Sa Ket, Thailand, falls to 47-5-1, 41 KOs. It was Sor Rungvisai’s first defeat since losing a technical decision to Carlos Cuadras in May of 2014, a span of 20 fights.

With the win, and in one of the best fights of 2019, Estrada has many options going forward. Estrada could fight a third fight with Sor Rungvisai, or he could make an optional defense of the title.

“If (Sor Rungvisai) wants a third fight, I’ll give him that fight. But first, I would like to unify the against another world titleholder at 115 pounds.”

A while back, there was a thread here asking who was the most overrated fighter in the pound-for-pound top ten at that moment. I wrote Srisaket then. Last night's fight just reinforced my opinion. He's fun to watch when his…

Finally got a chance to see it. Scored it 116-112 for Estrada. Sor just doesn't seem like the same person since his breakup. He didn't even really look like he cared until the 10th round Not trying to take anything…

Estrada deserves kudos for the win. Sor though... he did not look himself, like he just couldn't get into a proper rhythm or something. Wouldn't mind seeing a 3rd fight so we know if that was a fluke.