Making weight has never been an issue for either boxer, with Friday's weigh-in being no exception. Both champion and challenger easily hit the mark for Saturday's junior lightweight title fight, which streams live on ESPN+ from Chukchansi Park in Fresno, California. 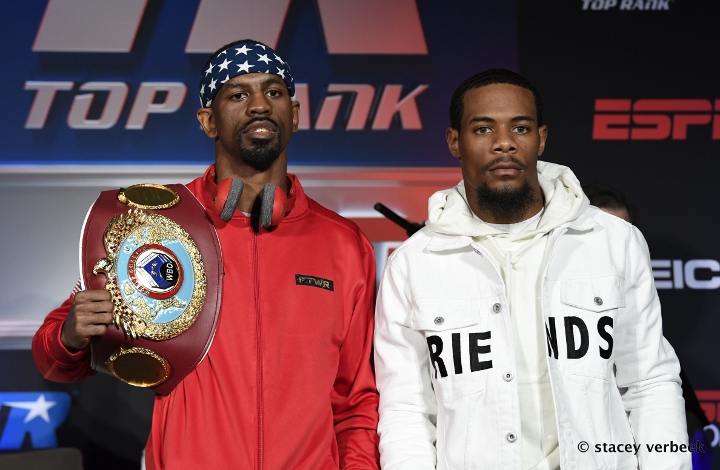 Herring (20-2, 10KOs) makes the first defense of the 130-pound title he collected in a career-best 12-round unanimous decision victory over Japan's Masayuki Ito this past May in Kissimmee, Florida. Their ESPN-televised affair took place on the Saturday prior to Memorial Day, with the Long-Island-bred southpaw continuing the patriotic theme in playing Veteran's Day weekend.

Roach (19-0-1, 7KOs)—a 24-year old contender from the greater Washington D.C. area—scored a 10-round decision win over Jonathan Oquendo in his most recent outing this past May in Las Vegas, Nevada.

In the evening's chief support, Bulgaria's Kubrat Pulev (27-1, 14KOs) bides his time ahead of a second career title fight as he faces Detroit's Rydell Booker in a scheduled 10-round heavyweight contest.

Pulev weighed 248.4 pounds, slightly lighter than in his TKO win over Bogdan Dinu in March, when he weighed just shy of 250 pounds. The aftermath of the bout left him in hot water, as a well-publicized inappropriate exchange with a female reporter resulted in an administrative suspension issued by the California State Athletic Commission.

On the boxing side, Pulev has won seven straight since a Nov. 2014 knockout loss to then-World heavyweight champion Wladimir Klitschko.

Booker (26-2, 13KOs) weighed 248.2 pounds, almost more than a pound lighter than his past outing. The 38-year old scored a 3rd round knockout on a local club show this past June in Detroit, Michigan, coming less than two months following a Showtime-televised points loss to unbeaten prospect Jermaine Franklin in April.

Saturday's livestream coverage begins at 6:30pm ET, with the main portion of the show beginning at 10:00pm ET.

Anybody know if Jenny Sushi showed up???