Rosendo ‘Bufalo’ Alvarez hasn’t laced up a pair of gloves in nearly eight years, but found a way to deliver a knockout blow for live action-starved boxing fans.

The former two-division champion—now a promoter in his native Nicaragua—led the charge in presenting the first televised boxing event in six weeks, with ESPN Deportes airing a show Saturday evening live from Polideportivo Alexis Arguello in Managua, Nicaragua. Alvarez himself fought at the complex several times, including the first seven bouts of his wild pro career but left the action to the next generation for this event.

In the main event, Robin Zamora (15-7, 8KOs) squares off versus Ramiro Blanco (18-7-3, 10KOs) in a rematch to their bout in this very venue last October. Zamora won by 2nd round knockout in what serves as the most recent contest for both boxers.

Fans in attendance are separated by every other seat, with all essential personnel required to wear protective masks. 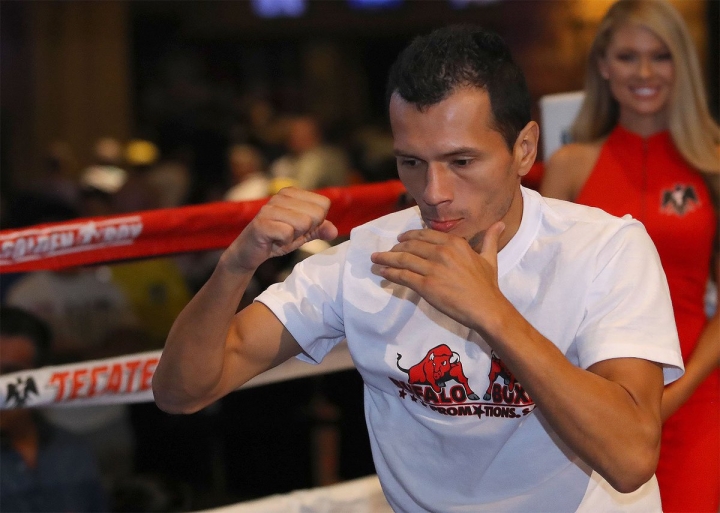 Freddy Fonseca picked up the family’s first win since last summer. It came in relatively easy fashion, as the junior welterweight southpaw stopped overmatched Alain Aguilar in the 5th round of their televised chief support.

Aguilar (8-8-2, 1KO) remained on his stool for the start of round five, at which point he was counted out. The official time was 0:10 of round five.

Neither of the Fonseca brothers—Freddy or younger sibling Francisco—has seen the win column since both emerging victorious on the same club show last July. Francisco Fonseca—a former two-time title challenger—parlayed the feat into a crack at the IBO 130-pound title last November as well as a high-profile clash with Ryan Garcia this past February, in which he was obliterated in one round.

Freddy Fonseca had lost two straight following his aforementioned win last July, but righted the ship on Saturday night. He had a willing opponent in Aguilar, who was long on heart but miserably short in ability and technique. Wide, looping punches were fired at all angles by the 23-year old, none of them in proper fashion and very few finding their desired target.

Fonseca offered a disciplined performance, to the point of even putting on the earmuffs and letting Aguilar unload in a spirited exchange in round four. Most of the shots were picked off by the 28-year old southpaw, who landed jabs and power shots without breaking a sweat.

Somewhere in between rounds four and five, Aguilar made the decision that he was done for the night. The bell sounded for round five to begin, with the journeyman firmly planted on his corner stool until the referee reached the count of ten.

Fonseca advances to 28-5-1 (19KOs) with the win. He’d lost three of his previous four starts prior to Saturday, including a 7th round stoppage last May at the hands of Joseph ‘JoJo’ Diaz, who has since won a 130-pound title.

Gabriel Escalante was finally able to get in some rounds and end a bout inside the distance.

The 22-year old junior welterweight prospect had his way with Mario Mairena, picking apart the 38-year old en route to a 5th round knockout in their scheduled six-round prelim.

The bout was every bit the mismatch as was suggested on paper. Escalante (13-0, 7KOs) is a prospect with potential while Mairena (2-20-1, 1KO) hasn’t won a fight since the tail end of Barack Obama’s first term in office during the last the time the United States had a real president. Given the disparity in records, the expectation was for Escalante to rack up another early knockout in as his six prior stoppages have all come in two rounds or less.

Instead came the conscious decision for Escalante to pick his spots in what is already his second fight of 2020. The three-year pro from Managua scored a 2nd round knockout this past February but was able to put in some extended work on Saturday before finally bringing a sudden ending to the night. Escalante froze Mairena along the ropes before raking a body shot to force him to the canvas. Mairena beat the count but was deemed unfit to continue.

For the seventh time in six years, Byron Castellon and Eliezer Gazo collided in the ring to deliver a highly entertaining affair.

For the first time in their club circuit series, Castellon found a way to win. The 27-year old from Chichigalpa prevailed by six-round decision. Scores were 59-55 across the board, according to on site ESPN personality Levi Luna as the cards were not announced.

The action was furious from the opening bell and didn’t let up until the clock hit 0:00 to signal the end of the fight after six high octane rounds. Castellon (15-13-3, 2KOs) managed to remain a step ahead for the most part, though that didn’t prevent Managua's Gazo (18-10-2, 3KOs) from feeling any less dejected by fight’s end.

Gazo was 4-0-1 (1NC) in their previous six encounters, although the two fought to a six-round draw in their sixth and most recent meeting in July 2016.

Lesther Lara enjoyed the distinction of making the first televised ring walk since March 13. His grand glory ended once the opening bell sounded, as Bryan Perez scored a 2nd round knockout in the televised opener between local featherweights.

Perez dropped Lara twice, the second prompting the referee to end the fight at 2:46 of round two.

The bout opened as a feel ‘em out session, with Lara parrying out of his southpaw stance while Perez sought the perfect opportunity to pounce. He found it in a big way in round two, catching Lara with his guard down and slamming home a right hand which sent him to the canvas.

Believe me, I was happy and excited to see the first boxing card in this Pandemic. If, this is the process to fight safety during Corona Virus, this give us hope. :boxing:

Props to Bufalo Boxing Promotions. someone get a hold of Lou DiBella to co-promote with Low Tier world Promoters NOW to get a bit of change for what networks will pay for to air it. I doubt Lou would be…

Wow, so boxing was the first sport to get back on the map. I bet we won't hear much about this but the media will make a big deal after the UFC comes back.

Good to see live boxing but it was strange seeing the ref,ring announcer and half the fans wearing masks.