One of the things Stephen Espinoza especially likes about Devin Haney is his willingness to accept steps up in competition every fight.

The precocious prospect/contender just turned 20 in mid-November. That hasn’t stopped the talented lightweight from embracing the types of challenges television executives like Espinoza expect when paying sizeable license fees for content.

Espinoza, Showtime’s president for sports and event programming, thinks Haney is on the cusp of becoming a “Showtime Championship Boxing” fighter. First, though, the Las Vegas resident must pass what Haney anticipates will be the most difficult fight of his three-year pro career Friday night. 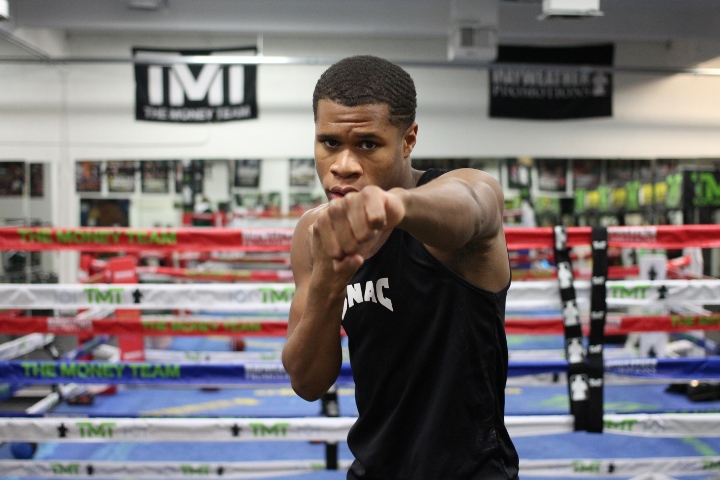 Haney (20-0, 13 KOs) is scheduled to box unbeaten South African contender Xolisani Ndongeni in a 10-round lightweight bout that’ll headline a “ShoBox: The New Generation” tripleheader from Shreveport, Louisiana (10 p.m. ET/7 p.m. PT). Ndongeni has competed outside of South Africa just once in his eight-year pro career, but the 28-year-old contender is skilled and hungry, well aware of how upsetting Haney could change his entire life.

Espinoza is interested in watching how Haney deals with a legitimate lightweight contender who’s in his physical prime.

“Through his ‘ShoBox’ appearances, Devin has already demonstrated that he sort of deserves to be considered as one of the top young, rising stars in the sport,” Espinoza said. “And now begins the process of stepping up, and seeing how deep his talent really is. In the conversations with Devin and his father, they haven’t been reluctant at all to take tougher fights. So, I think this is the first step of many in which these opponents are gonna be successively more challenging, and we’ll find out how good Devin really is.

“Obviously, he has looked really, really good in his appearances thus far. But the question really gets answered when you start stepping up the talent. That’s where he is now in his career progression.”

Victories over Mason Menard and Juan Carlos Burgos in his past two fights have advanced Haney’s career. Unlike Ndongeni, though, each of those opponents had lost before Haney defeated them.

Prior to losing to Haney, Burgos hadn’t been beaten since four-division champion Mikey Garcia (39-0, 30 KOs) topped him by unanimous decision in their January 2014 bout in The Theater at Madison Square Garden in New York.

Burgos’ comparative inactivity between his fights against Garcia and Haney cost him, however. He also experienced most of his success within the featherweight division, two weight classes below where he lost to Haney.

Haney didn’t attain his goal of becoming the first fighter to knock out the Mexican veteran, though he did beat Burgos convincingly. Haney won all 10 rounds on two scorecards (100-90) and one judge scored seven of their 10 rounds for him (97-93).

“I know he wanted the knockout really badly and was a little disappointed,” Espinoza said. “But I think given the type of fighter he was fighting – not just that he hasn’t been stopped, but that he has been a world-title challenger – I think he was exactly what Devin needed for his career development. The only criticism that you could offer, and it’s not much of a criticism, is that he didn’t stop him. But to have that kind of showing, at his age, against a guy who has been in world title fights, speaks really well for Devin’s talent.”

Before Haney and Ndongeni square off, Showtime will televise two undercard fights from Stage Works, a studio complex in downtown Shreveport.

I think we are a ways off from finding out how good Haney is, unless he losses, but he's only 20 still so thats to be expected. And with Loma running 135 right now I think they smartly should take…

Kid looks pretty solid. This should be his fight that gets people buzzing. An undefeated fighter will look very glossy on his record.

Good talent. All the best to Haney.

the dude is a phenom