NEW YORK – Stephen Espinoza has made an aggressive pitch to Canelo Alvarez’s team.

All Showtime’s president for sports and event programming can do now is wait for Alvarez, Oscar De La Hoya and Golden Boy Promotions president Eric Gomez to choose the Mexican superstar’s new broadcast partner in the United States. Alvarez is a television/streaming free agent now that HBO has announced the premium cable network will move away from broadcasting boxing by the end of this year. 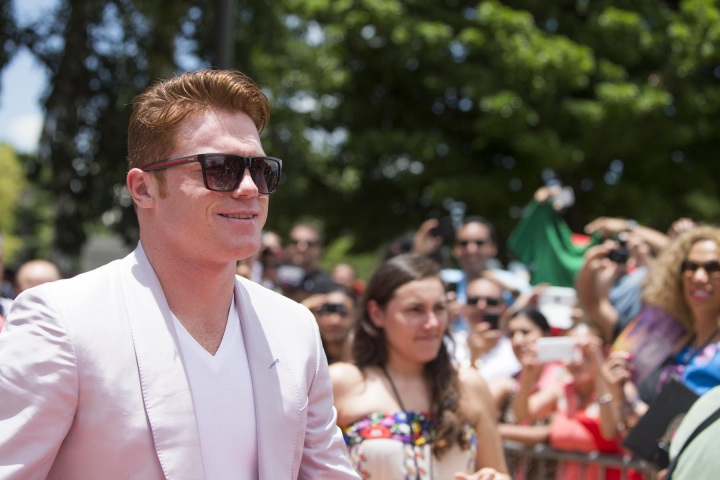 “We’ve expressed interest, but they’re taking their time,” Espinoza told BoxingScene.com at Intrepid Sea, Air & Space Museum. “We’ve made our interest known. But it’s not something we’re gonna be real up front about in the press. We’ve made our communication directly to Golden Boy and they know we’re very interested. And we obviously have a history with Canelo.

“There’s a range of free agents, and we think we are the most attractive platform in the sport. We have a proven track record in pay-per-view and we’ve got the deepest stable of current stars.”

Alvarez has worked with Showtime on several of his fights, including his majority-decision defeat to Floyd Mayweather Jr. five years ago.

The 28-year-old Alvarez (50-1-2, 34 KOs) then signed an exclusive deal with HBO that began with his third-round knockout of James Kirkland in May 2015. He boxed in six pay-per-view fights and fought once live on HBO during the three-plus years of that deal.

Promoter Bob Arum also has expressed interest in Alvarez fighting either on ESPN or ESPN Pay-Per-View. Arum’s Top Rank Inc. has an exclusive content agreement with ESPN, which would require De La Hoya to work with Top Rank on Alvarez’s fights if he signed a deal with ESPN.

DAZN, the new streaming service with which British promoter Eddie Hearn has partnered, also has expressed interest in working with Alvarez.

Espinoza believes Showtime is the only company pursuing Alvarez’s services with the requisite record in producing successful pay-per-view events.

If Espinoza lands Canelo this guy might just be the best exec Ive ever seen! Showtime is in a great position but adding the PPV king only takes you up even higher. The last thing showtime needs if for the…

[QUOTE=BigStomps;19162852]Quit lying loser! You'll always be a complete failure in life... I feel sorry for your mother![/QUOTE] ^^^Lol, look at this fool