Errol Spence Wipes Out Carlos Ocampo in One Round

The heavily favored Spence knocked out overmatched mandatory challenger Carlos Ocampo with two body shots at the end of the first round of their scheduled 12-round, 147-pound title fight in Frisco, Texas. Spence’s victory over Ocampo was the main event of Showtime’s tripleheader from Ford Center at The Star, the Dallas Cowboys’ training center.

Spence connected with a left-right combination to the body that sent his challenger to his gloves and knees. The temporarily paralyzed Ocampo couldn’t reach his feet before referee Laurence Cole reached the count of 10.

Their fight was stopped with no time left in the first round.

The 28-year-old Spence, a southpaw from nearby DeSoto, Texas, improved to 24-0, produced his 21st knockout and made the second defense of the IBF welterweight title he won from Kell Brook a year ago. The 22-year-old Ocampo lost for the first time as a pro (22-1, 13 KOs).

“I was a little disappointed,” Spence told Showtime’s Jim Gray immediately following his easy victory. “I wanted to give the crowd their money’s worth. And I wanted him, you know, to sustain a little bit and take a little bit more punishment. But, you know, the body shot landed right on point and it dropped him.”

Mexico’s Ocampo was such a gigantic underdog against Spence, Las Vegas sports books weren’t even taking action on their fight. Multiple Internet sports books listed Spence as a 100-1 favorite.

It didn’t take long Saturday night to learn why those odds were so absurdly lopsided. 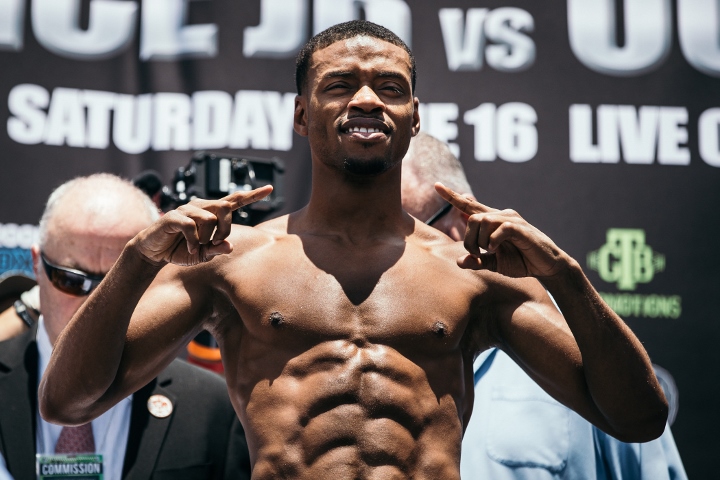 Ocampo let his hands go a minute and 15 seconds into the fight and tried to attack Spence’s body. Spence held his ground, though, and landed a hard left hand to Ocampo’s chin with 1:08 to go in the fifth round.

Spence later landed a left hand to Ocampo’s body at the 30-second mark of the first round. About 25 seconds later, right after another Spence left landed a little low, Spence unloaded the brutal combination to the body that ended their fight.

Ocampo went down with three seconds remaining in the first round. He tried to get up, but Ocampo couldn’t reach his feet.

He fell flat on his back once Cole called an end to their fight.

“He reacted a little weirdly when I hit him with a body shot,” Spence said. “He kind of bounced back a little bit, so I kind of knew that if I hit him again he probably would drop or he probably would react again the wrong way. And then I would just keep going to the body. That’s my game plan, anyway. I’m the body snatcher.”

The IBF ordered Spence to make a mandatory defense versus Ocampo on January 23, three days after Spence stopped Lamont Peterson early in the eighth round at Barclays Center in Brooklyn.

Ocampo is ranked No. 3 by the IBF, but the top two spots in its 147-pound rankings were vacant when the Spence-Ocampo match was ordered. Cuba’s Yordenis Ugas has since been inserted into the No. 2 spot in the IBF’s welterweight ratings.

The unknown Ocampo occupied a high position in the IBF’s rankings without winning a fight against an established contender. His low level of opposition obviously didn’t come close to preparing him to face a fighter of Spence’s caliber.

“It’s a little bit satisfying,” Spence said. “I’m a little satisfied, you know, but I wanted to give the crowd their money’s worth. They come out here to support me. You know, it’s a big event and we’ll definitely be back. We’ll definitely be back. Maybe after I unify, unify some titles, we’ll come back here again and make this an annual thing, where I’m fighting here.”

Even though the main event lasted only one round, Spence proved himself as a ticket-seller in his home area by drawing an announced crowd of 12,604 to the Cowboys’ training center. The event drew numerous Cowboys players, including quarterback Dak Prescott, who was interviewed by Showtime’s Brian Custer before Spence knocked out Ocampo.

“Errol, you made the Cowboys, you made sports proud tonight,” Cowboys owner Jerry Jones told Spence and Gray in the ring. “This room was full of Dallas Cowboy football players, supporting you. They share your passion. I saw a guy in this ring that knew what he wanted. I know what he wants, OK? We all saw that. When you knock a man out by hitting him on the side of his back, you’re bad to the bone.”

[QUOTE=O Prophet;18874628]Loooooooooooool[/QUOTE] one snap on Floyd and it's over like breaking a potato chip.

[QUOTE=allenfred;18868998]. Boxing is a crooked sport and with that pimp Al slime Haymon and Sammy and his two chimps in the ring the odor is terrible.[/QUOTE] Loooooooooooool

The unofficial main event of the card didn't turn out as expected :lol1:. Fortuna didn't bang his head on anything...the only thing that could have possibly happened was a whiplash effect. Even that seemed kinda iffy... Even if Granados knew…

[QUOTE=Steven Mccowan;18868736]Dudes a beast. Especially against this competition. [B][SIZE="3"]Fighters need to just drop belts and build their careers on fights and not belts.[/SIZE][/B] These organizations are obviously retarded lol. So get a live and unbroken body in for spence. Not…