Staples Center, Los Angeles, California - In a fight that lived up to the billing, Errol Spence absorbed the most punches of his career (172) but responded by landing 221 on Shawn Porter and scoring the fight's only knockdown in the 11th.

Spence landed 44 percent of his power punches thanks to his slithering body attack hat accounted for 113 of his connects. The combat was nearly even in terms of punches thrown as Spence threw 745 to Porter's 744. 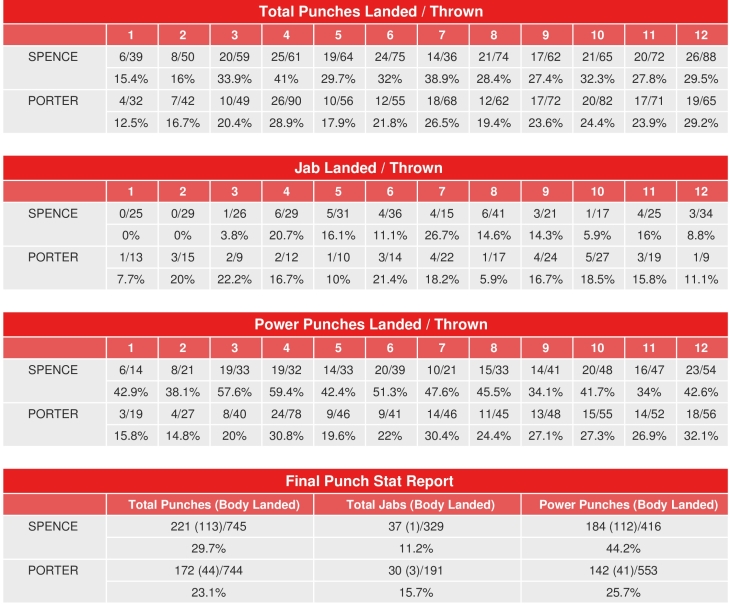 Porter was moving and boxing in the first, and he was jumping in with flurries when needed. Spence was starting slow and feeling out what Porter had to offer. They began to trade shots in the second, with Spence having the edge. It was getting real rough with Porter coming inside like a madman.

It was a real dogfight in the third, with the two fighters trading at close range as the crowd stood up. Porter was landing a lot of solid shots in the fourth. He was taking the fight to Spence and really catching him with good hits. Spence was landing as well, looking to stop the constant charge of Porter.

Spence picked up the pace in the sixth as Porter began to look a little winded. Spence and Porter continued to take part in a rough fight in the seventh and eight. Both were connecting with big shots. Spence appeared to be doing  more damage.

It continued to be a close bout as they entered the tenth. During the eleventh, Spence caught Porter on the chin and dropped him. Porter made it and took the fight to Spence, looking to steal the round back. It was give and take in the twelfth, but it was Spence landing the more accurate and harder punches.

[QUOTE=The tucker;20090614]I saw it at the movies crystal clear you sound like you saw it on a stream that kept buffering. Spence was landing combinations to porters nuts. Spence was doing some good work to the body later on but…

[QUOTE=revelated;20090050]If you were watching a crappy stream then that makes sense. Because Spence was using James Toney counter punches in between defensive motion. Porter landed maybe half of what he tried to land; the rest either winged or hit arms…

[QUOTE=Don Pichardo;20089995]Keep at bay Distract Set up attack.[/QUOTE] Even more than that, Spence was using the jab to throw Porter's rhythm off initially. When Porter figured it out, the jab became less effective and more range finding. But we already…

[QUOTE=The tucker;20089546]Those punch stats are so in accurate I think they should stop doing them. No matter what fight I’m watching I watch a fighter land a punch and it does not show on the stats when they show it…