Errol Spence: Amir Khan Has Al's Number if He Wants to Fight Me

Could he take Brook’s biggest potential opponent from him, too? Spence responded to a question late Saturday night about boxing Khan by stating it “could be” an option for later this year.

“Could be,” Spence told FightHype.com following his first-round knockout of Carlos Ocampo on Saturday night in Frisco, Texas. When asked if thinks a fight against Khan will happen, Spence said, “I don’t think nothing. It could be, though.” 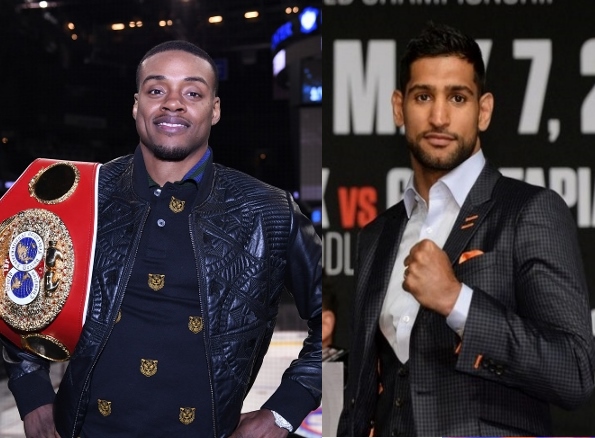 Spence also was asked if he thinks welterweight rival Terence Crawford might get to fight Khan first.

By Al, Spence referred to his adviser, Al Haymon, who also has worked with Khan. Like Spence, Crawford (33-0, 24 KOs) needs credible opponents as they build toward their welterweight title unification fight.

Khan signed a three-fight contract with Eddie Hearn’s Matchroom Boxing in January presumably because it’ll include a lucrative domestic showdown with Brook by the time it concludes. The British rivals each are expected to fight once more before seriously discussing facing each other somewhere in the United Kingdom.

England’s Khan (32-4, 20 KOs) has often embraced big challenges, though, and could be enticed to battle the powerful Spence if the money is right.

Khan tentatively is expected to return to the ring at some point in August against an undetermined opponent. The former IBF/WBA 140-pound champion knocked out Toronto’s Phil Lo Greco (28-4, 15 KOs) in the first round April 21 in Liverpool, England, which marked Khan’s first fight in nearly two years.

Weight could prevent a Khan-Brook bout from happening, though.

Brook, who lost his IBF welterweight title to Spence a year ago, now competes in the junior middleweight division (154 pounds). Khan contends he is still a welterweight and wants to win a world title within the 147-pound division.

Spence wants to box the winner of an upcoming WBC welterweight title bout between Danny Garcia (34-1, 20 KOs) and Shawn Porter (28-2-1, 17 KOs), but that fight won’t take place until August 25 at the earliest. That means the Garcia-Porter winner won’t be available to face Spence before the year ends and Spence wants to have a third fight in 2018.

The unbeaten IBF welterweight champion mentioned after defeating Ocampo that he would prefer fighting Jessie Vargas over Yordenis Ugas. Khan would at least be a higher-profile opponent for Spence than Las Vegas’ Vargas (28-2-1, 10 KOs), a former WBO welterweight champ, or Miami’s Ugas (22-3, 11 KOs), the No. 2 contender for Spence’s IBF 147-pound championship.

[QUOTE=BDG;18878006]I can tell you are an expert goal post mover. I'll leave you alone . Have a good day[/QUOTE] Look in the mirror I think we both like to have the last word good bye

First of all, TBC does not need to leave Bob Arum and Top Rank. I mean who else is going to get him close to 3 million to fight the champion in his first fight at the weight! Also, Spence…

[QUOTE=Bronx2245;18878368]September 24, 2017: [B]Daniel Jacobs Clarifies Role of Al Haymon in Eddie Hearn Union[/B] By Radio Rahim Jacobs indicates that [B]nothing has changed[/B] between him and Haymon. He says the powerful adviser is here to stay and won't be on…

[QUOTE=Bronx2245;18878358]And Jacobs in not in court, suing Haymon, or complaining that he was robbed, or didn't have to buy out his contract! He made his move very easily, unlike Oscar, Floyd, Cotto, and Mikey! He's very grateful for what Al…

[QUOTE=killakali;18878340]So what u are saying is haylon couldnt have done any of those fights without golden boy and k2? Got it. Jacobs was so happy being with Haymon he him after the arias fight lol. Then khan, Beterbiev, herring, Pedraza,…