Jaime Munguía is in the final stage of his training camp, and this week will be the key to achieving his maximum performance, conditions and recovery factor, as he gets for what will be the fifth defense of his WBO super welterweight world championship.

Munguía (33-0-0, 26 ko's) will face Ghanaian Patrick Allotey (40-3-0, 30 KO's) on Saturday, September 14, in Carson, California, as part of Mexico's Independence Day Weekend. The bout will be broadcast in Mexican territory by Azteca 7, and globally by the DAZN app.

Munguía will be premiering an upgraded corner, directed by the brand new Hall of Famer and multi-division world champion, Erik "Terrible" Morales, who has declared that Munguía is a natural fighter and his qualities must be exploited, so that he feels comfortable in the ring and develops his potential. 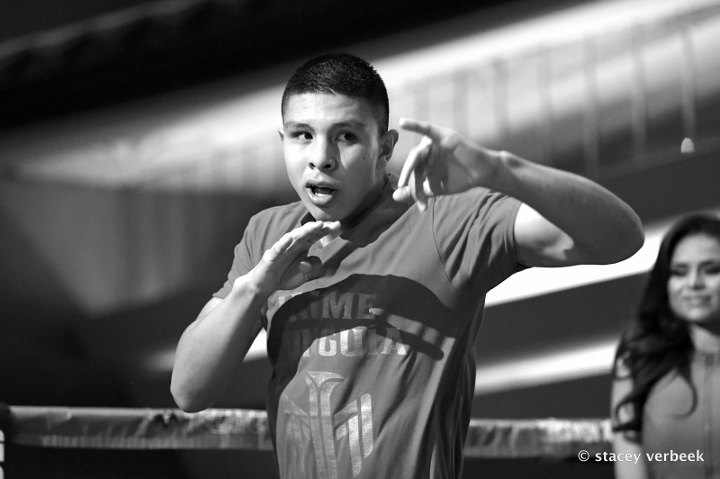 His opponent, Patrick Allotey, is the African super welterweight champion and has won his last six fights since 2016.

“Jaime is an aggressive fighter by nature, many people have criticized his defense, but he is not a defensive fighter. He needs to make an active defense - and his best defense is to attack.. and although we are not going to attack irresponsibly or acceleratedly, we are going to make him find a balance, defend himself with movements, with intelligence, but attack with a greater rhythm and manage the times and distance of the fight,” said Morales in an interview in Tijuana.

It will be the third defense for Munguía this year. In January he beat Takeshi Inoue in Houston, and in April he beat Dennis Hogan in a close and controversial bout in in Monterrey. Both fight were won by decision.

He definitely has power, he needs accuracy and polish his boxing technique. He is very young and if he learns to time his punches and throw combinations from body to the head, he will be a monster. They also need…

I wonder how frustrated Morales gets while training this idiot Bumguia. He looks so dumb with his mouth wide open like duuuuhhh he is the dumbest looking boxer. I dont think this relationship will last long. Average fighters make great…

[QUOTE=daggum;20035666]you can't improve a bum to an elite fighter. all you can do is improve his marketing and try to trick people[/QUOTE] But you can imporove Munguia, who is not a bum. You are probably a Mayweather ***boy....he had marketing…

you can't improve a bum to an elite fighter. all you can do is improve his marketing and try to trick people

[QUOTE=Satir;20034049]Supposedly the devastating puncher not KOing the opposition he faces while having youth, power and size advantages, not only that he also struggled, for the most of them lost, to a b-level fighter, he must be at best a b-level…