Navarrete, the No. 2 challenger for Dogboe’s title, was listed as a 5-1 underdog by most Internet sports books. That didn’t stop him from using his five-inch height advantage, reach edge and activity to overwhelm the game Dogboe, who had to dig deep to avoid getting knocked out during the final two rounds. 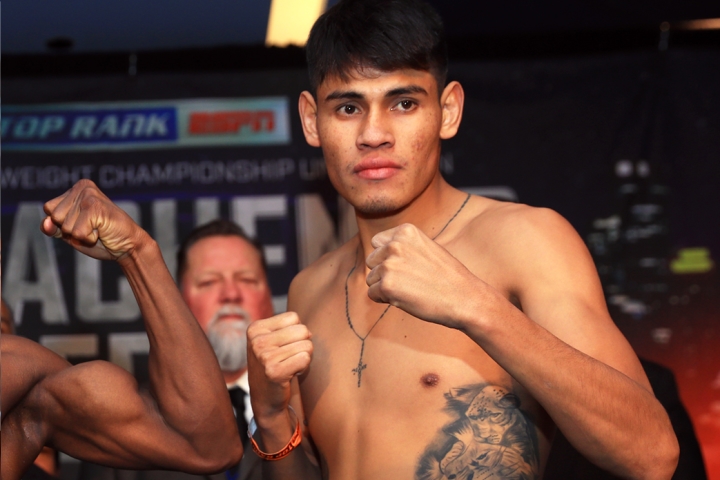 The 24-year-old Dogboe (20-1, 14 KOs) failed in the second defense of the WBO 122-pound championship he won by knocking out Jessie Magdaleno in the 11th round April 28 in Philadelphia. He stopped Japan’s Hidenori Otake in the first round of his first defense, August 25 in Glendale, Arizona.

“It was a great fight, and Emanuel Navarrete fought like a true Mexican warrior,” said Dogboe, a London resident who was born in Ghana. “Champions are supposed to keep going under any circumstance, but I just couldn’t get the victory. The best man won tonight.”

The 23-year-old Navarrete (26-1, 22 KOs) hasn’t lost since dropping a four-round unanimous decision to Daniel Argueta (then 4-0) in his fourth professional fight six years ago.

“Hearing those words was the culmination of a dream,” Navarrete said, referring to Jimmy Lennon Jr.’s announcement of his win. “This world championship represents every day that I was working away from my family. This title represents sacrifice.”

Navarrete pressured Dogboe during the 12th round, which the former champion courageously spent trying to avoid a knockout defeat.

Navarrete busted up Dogboe with an array of jabs, left hooks and overhand rights throughout a lopsided 11th round in which Dogboe had trouble seeing out of his severely swollen left eye. Navarrete also bloodied Dogboe’s nose in the 11th, when Dogboe went down due to a wet canvas near his own corner for the second time in as many rounds.

A ringside doctor checked the swelling around Dogboe’s left and right eyes before the start of the 10th round. Dogboe went to the canvas just after the 1:20 mark of the 10th, but Esteves determined Dogboe slipped on the wet canvas.

Navarrete drilled Dogboe with lefts, rights and jabs once the action resumed in the 10th round.

Dogboe dropped Navarrete about 1:10 into the ninth round. Esteves didn’t count it as a knockdown, though, because he ruled Dogboe hit Navarrete behind his head.

Dogboe battered Navarrete with two hard lefts to this body in the first minute of the eighth round. Dogboe chased Navarrete to the other side of the ring and landed a right hand to his head as he continued coming back from trouble in prior rounds.

After struggling during the sixth round, Dogboe came back in the seventh round to land right hands to the head and body that kept Navarrete moving backward.

Navarrete continued landing lefts and rights from close range throughout the sixth round, when he beat up Dogboe. By then, the swelling surrounding Dogboe’s left eye was obvious.

A left hand by Navarrete knocked Dogboe back into Navarrete’s corner just before the halfway point of the fifth round.

Dogboe controlled the action in the fourth round by working off his jab and landing occasional right hands. Dogboe drilled Navarrete with a right-left combination at the 1:25 mark of the third round.

Navarrete buzzed Dogboe with a left hook that knocked the defending champion into the ropes just after the midway mark of the second round. Navarrete followed up with another left hook and a straight right hand that made Dobgoe move away from him.

Dogboe landed two hard body shots and a jab that knocked Navarrete backward about 1:20 into the first round. Navarrete landed a right hand that backed Dogboe into the ropes later in the first.

“I injured my right hand early in the fight,” Navarrete said, “but I had the desire to be a champion and I did everything necessary to get the title. I am very happy and proud to achieve this goal of being the world champion.”

[QUOTE=HandsofIron;19340430]I forgot what round but he got tired and started backpedaling, he needs to work on that. Timmy noticed this too.[/QUOTE] He thrown 80 punches by round. That was because Dogboe landed on him some bombs, not because he got…

[QUOTE=Boxingfanatic75;19339774]I thought it was an atrocious fight. I was yelling at my iPad for Dogboe’s corner to stop the fight but they refused. He was taking the kind of shot that don’t knock you out cold but are repeated over…

[QUOTE=Mexican_Puppet;19339792]Better conditioning? Navarrete have a lot of stamina.[/QUOTE] I forgot what round but he got tired and started backpedaling, he needs to work on that. Timmy noticed this too.

[QUOTE=richardt;19340305]Hopefully Navarrete gives up his job and focuses full time on boxing because he has a lot of momentum now and is a really solid fighter. His ring movement was excellent and his game plan perfection.[/QUOTE] He will. He had…

Hopefully Navarrete gives up his job and focuses full time on boxing because he has a lot of momentum now and is a really solid fighter. His ring movement was excellent and his game plan perfection.