Emanuel Navarrete entered the night with the intention of proving he’s the best super bantamweight in the world.

Little did he know that the night was an audition for a place on a Mexican Independence Day-themed card next month in Las Vegas.

Navarrete scored a knockdown in round two and was merciless in his follow-up before the fight was stopped at 1:54 of round three.

“I want to continue to the proud tradition of Mexicans fighting in Los Angeles, filling up the crowds here with proud Mexican fans,” Navarrete told ESPN’s Crystina Poncher following his latest win.

More performances like this will certainly get him there.

The power difference was as evident from the opening bell as appeared to be the case on paper, all to the delight of the announced crowd of 3,944 in attendance at the state-of the-art venue. Navarrete walked through the punches of de Vaca, who’s stopped just 33% of his opponents heading into his first career title fight. The defending titlist tagged his unbeaten but overmatched challenger with right hands without any fear or regard of the incoming.

That level of bravery and confidence in his own skills and power led to the bout’s first knockdown coming midway through round two. De Vaca came in with his hands held high but not tight enough to serve any real purpose. Navarrete planted his feet, connecting with a left and right uppercut before finishing the sequence with a sweeping right hand across his opponent’s chin.

Navarrete sensed blood in the water and moved in for the kill in round three. De Vaca was near defenseless as the defending titlist swarmed with an onslaught of power punches, though the one-sided action being allowed to continue due to the challenger fighting back just enough to avoid a stoppage.

It wasn’t going to last, though, as Navarrete never relented. De Vaca eventually did, unable to keep his overwhelming foe off of him. Referee Raul Caiz sensed as much, stepping in to the stop the contest.

De Vaca’s first career title fight results in his first defeat as he falls to 20-1 (6KOs). 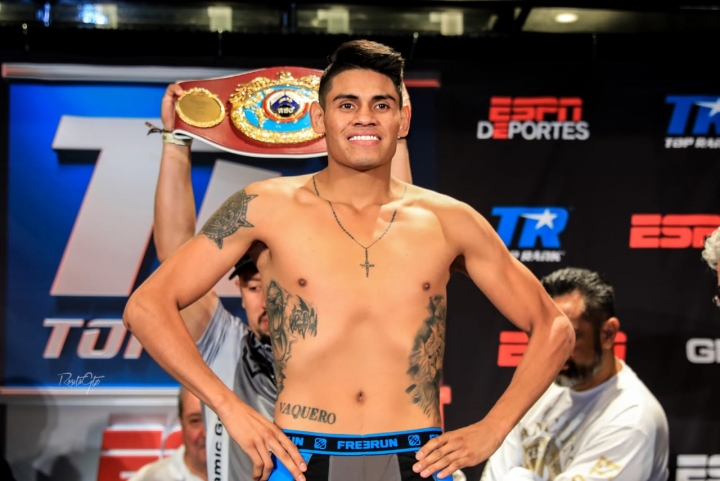 Meanwhile, Navarrete remains a hot commodity. Saturday’s feat gives him 23 straight wins as he improves to 28-1 (24KOs). The bout was his third straight in the United States after having fought exclusively in Mexico. The previous two stateside appearances came in his pair of wins over Isaac Dogboe. Navarrete ended 2018 with a bang, delivering what was perceived as a notable upset in dethroning the previously unbeaten Dogboe in a 12-round decision last December in New York City.

The feat was followed up with a more explosive performance in their rematch this past May, with Navarrete manhandling his familiar foe in a one-sided 12th round stoppage win.

Heading into Saturday’s bout, the 5’7” volume puncher expressed concern about how much longer he can continue to make the 122-pound division. After putting in just three rounds of work, he now has the chance to add another win to his ledger as soon as four weeks.

Hall of Fame promoter informed the 24-year old that he is a strong candidate to land on the undercard of the September 14 ESPN+ card in Las Vegas, topped by unbeaten heavyweight Tyson Fury in a 12-round bout versus Sweden’s Otto Wallin.

The event falls on the Saturday prior to Mexican Independence Day, a Mexican holiday which has been traditionally celebrated with a major boxing show in the U.S., almost always in Las Vegas.

The past three years has seen Mexico’s best active boxer, World middleweight champion Saul ‘Canelo’ Alvarez command the date after it was previously dominated by former pound-for-pound and box office king Floyd Mayweather, whose last such appearance on the weekend came in 2015.

Alvarez spent the past two years facing Gennadiy Golovkin on the festive weekend, including his title-winning effort via majority decision in their rematch last September. Plans called for his return to the T-Mobile Arena—where he’s fought twice on Mexican Independence Day and three more time on Cinco de Mayo weekend including this past May—only for Alvarez to fail to secure an opponent in time to hold the date.

The moment he stepped out, Top Rank stepped in with Fury-Wallin. It’s not exactly a fight that appeals to the Mexican fan base, which would leave it up to the undercard attractions.

That would be where Saturday’s winner can fill the void.

“He is Mexican. He’s proud to be Mexican,” noted Arum after the bout of Navarrete, who is co-promoted by Top Rank and Zanfer Promotions. “The best fighter in Mexico will be there on Mexican Independence Day in Las Vegas defending his title.”

Ever ambitious, the offer was met with open arms.

“Mr. Arum promised me that we can come back on the September 14 card that is headlined by Tyson Fury,” Navarrete noted. “I would love to come back and fight on that card and in front of all of the Mexican fans.”

With more performances like what he’s shown throughout his title reign, no doubt they would love to have him back in the ring as early and as often as possible.

The bout aired live atop an ESPN-televised doubleheader.

I am not impressed by a win where the winner has the all physical advantages against his opponent. I mean, he is supposed to win if the odds are stacked in his favor, right? Let's wait until a guy his…

Magdaleno is a real player at 126! Hopefully Frampton or Shakur Stevenson is next :boxing:

Navarrete ate a lot of shots, he needs to tighten up his defence but otherwise he's top notch. Thing is I think he's a bit of a weight bully, I don't know how he performs when he moves up.