Elwin Soto powered his way to another successful title defense.

The compact junior flyweight titlist successfully turned away the challenge of veteran contender Carlos Buitrago, scoring a 12-round decision in their DAZN-streamed clash Friday evening at Fantasy Springs Resort Casino in Indio, California.

Judge Fernando Villarreal had the contest 119-109, far wider than judges Pat Russell (117-111) and Zachary Young (115-113) whose scorers were more in line with what viewers witnessed. 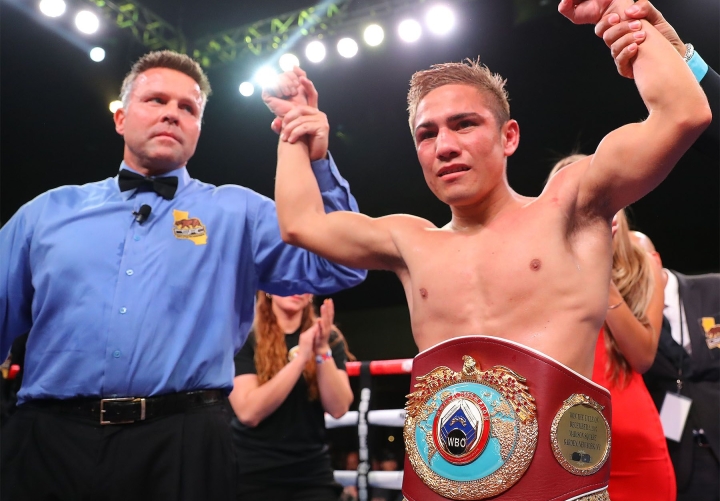 Soto spent most of the opening round playing defense, standing in front of Buitrago but fighting behind a tight guard as he picked off most of the incoming punches from his challenger. Buitrago sought angles, working his jab while searching for an opening to land his right hand.

Buitrago worked the body in round two, digging his left hook downstairs and forcing Soto to change up his defensive strategy. Soto adjusted in a big way, picking up his offense and connecting with a vicious left uppercut at center ring.

Soto picked up the pace in round three, but walked into a left hook. Buitrago took the attack back downstairs, though was warned for straying too low. It didn’t discourage the Nicaraguan contender from staying the course, touching Soto with left hooks to the body.

Round four saw Soto close the gap significantly. The defending titlist was able to time Buitrago’s lazy jab, slipping the shot and coming back with a hookercut to catch the challenger clean. The same level of aggression was carried into round five, cleanly outworking Buitrago particularly action took place at centering.

Buitrago tweaked his attack in the middle rounds. As Soto stalked, Buitrago pumped his jab and fought in reverse. The distance between the two was precisely what his corner demanded, though demanding a more sustained attack to prevent Soto from finding ways to march inside.

The advice didn’t quite take, though not for a lack of trying on the part of Buitrago. Soto connected with a clean left hook as Buitrago was moving towards the ropes midway through round eight. A right hand shot by the defending titlist got the attention of Buitrago, whose hands slowly began to drop.

Soto’s power was clearly taking its toll on Buitrago, who was still winning the pure boxing exchanges but was also forced to contend with a rapidly swollen right eye. Soto continued to serve as the aggressor, even during the moments when he was clearly outboxed.

Buitrago once again caught an earful from head trainer Joel Diaz at the end of round nine, as the veteran cornerman begged his charge to pick up the pace. Instead, it was Soto who intensified his attack, connecting with a right hand on a fatigued Buitrago whose defense was widening as the fight progressed.

Soto settled into a nice groove in the championship rounds, pumping his jab and landing right hands. The defending titlist was issued a final warning by referee Raul Caiz Jr. for pulling down the head of his challenger, but didn’t deter him from controlling the real estate.

Buitrago emptied his gas tank in the 12th and final round, shooting his jab and looking to pick apart Soto who resorted to showboating down the stretch. It turned out that Soto was the one who knew the score—figuratively, although the final tallies supported his decision to coast in the end.

Soto outlanded Buitrago 170-to-147 and connected at a much higher percentage (31% to 18%) according to Compubox. Buitrago was the busier fighter, throwing 798 to 550 for Soto.

The setback marks the sixth time Buitrago has come up short with some version of a major title at stake. He is now 0-3-1 with the real thing on the line—along with two losses in interim title fights—as he falls to 32-6-1 (18KOs).

Meanwhile, Soto continues to plead his case as among the best junior flyweights in the world—quite a statement given the division’s top players in Ken Shiro and Hiroto Kyoguchi. Soto makes the second defense of the 108-pound crown he violently annexed from Angel Acosta last June as he improves to 18-1 (12KOs).

The bout served in supporting capacity to a middleweight scrap between Jaime Munguia (35-0, 28KOs) and Tureano Johnson (21-2-1, 15KOs).