Ellie Scotney Inks Pact With Hearn Ahead Of March 28 Debut

Ellie Scotney has signed a long-term promotional deal with Eddie Hearn's Matchroom Boxing ahead of her professional debut.

The London prospect, who says she “doesn’t leave Catford”, is trained and managed by Adam Booth and will make her bow in the paid code on March 28. 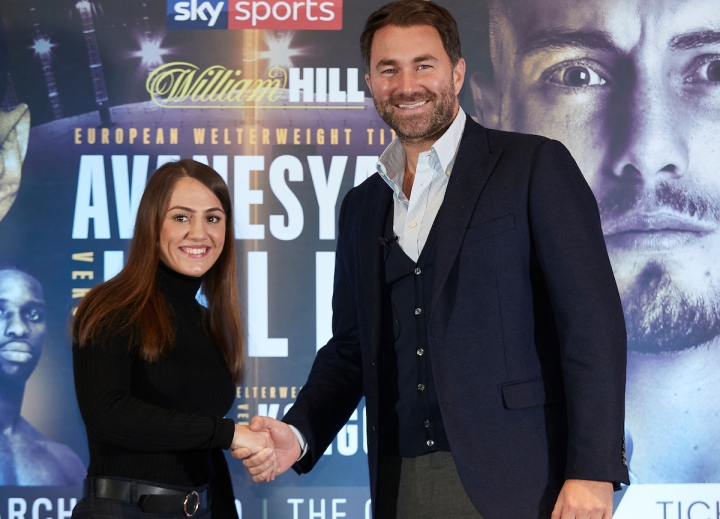 Scotney, who won the 2017 Elite national amateur title at 57kg and the English Title at Youth level having entered after only four amateur bouts, has been confirmed as an addition to the supporting cast to David Avanesyan’s European welterweight title defence against Josh Kelly at the O2 Arena in London, exclusively live on Sky Sports in the UK and DAZN Stateside.

“I’m over the moon to be joining the Matchroom stable,” said Scotney, who is aiming to establish herself as the next big female star. “I know that the sky is the limit with Eddie and my team.”

She will be joined on the card by Conor Benn, the Tony Sims-trained undefeated welterweight prospect, as well as Joshua Buatsi, who returns as he continues on his quest towards a world title fight.

“Ellie joins a thriving Matchroom stable and I believe she in the perfect place to develop her skills as she bids to become the latest major player in women's boxing,” said promoter Hearn. “The March 28 show at the O2 Arena is shaping up to be another huge night of boxing so make sure you catch it all on Sky Sports and DAZN.”

Ted Cheeseman, the former British super-welterweight champion whose last outing was a defeat at the hands of Scott Fitzgerald back in October last year, will be back in action alongside Commonwealth middleweight champion Felix Cash.

There is a mouthwatering welterweight showdown between Luther Clay and Chris Kongo as the former defends his WBO Global title against the Dillian Whyte-managed prospect.