Ellerbe: Smartest Move Wilder Made Was Turning Down DAZN

Last week WBC heavyweight champion Deontay Wilder (41-0-1) held a media workout in Alabma for his upcoming rematch against Luis Ortiz (31-1). The fight takes place on November 23rd at the MGM Grand Garden Arena in Las Vegas, Nevada and will be distributed by FOX pay-per-view.

Mayweather Promotions CEO Leonard Ellerbe, who's company will be co-promoting the fight, was also in attendance for the training session.

Earlier this year DAZN executive chairman John Skipper made a run at signing Wilder to a lucrative 4 fight deal worth a reported $120 million. The 4 fights would have included 2 fights against then WBA/WBO/IBF/IBO heavyweight champion Anthony Johsua. 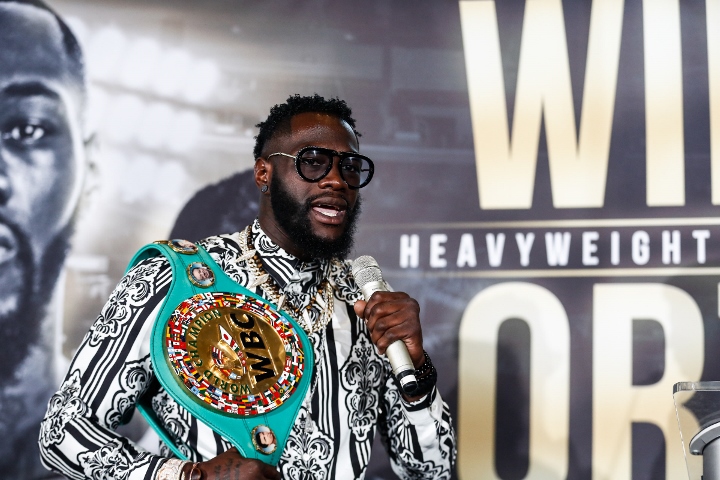 Wilder received a lot of criticism for walking away from the deal and continued to work with Premier Boxing Champions.

Ellerbe isn't one of those critics.  In fact, he praised Wilder for not accepting the contract and believes he will make more money in the long run by fighting on pay-per-view instead of the upstart streaming application.

"I told Deontay Wilder this when I saw him last week. I congratulated him and applauded him for not taking the DAZN deal. That was the smartest move he has made in his entire career," Ellerbe told BoxingScene.com. "He would have had a ceiling on the success that he could have on his events. There would have been a ceiling there on what he could make."

Wilder stopped Ortiz in the 10th round of their first encounter which took place in March, 2018. If he is victorious in the rematch, Ellerbe believes that the sky is the limit in regards to his earning potential.

A rematch against lineal champion Tyson Fury is penciled in for February 22nd and a fight against the Andy Ruiz-Anthony Joshua rematch winner could be in the future for Wilder if he continues to win. Both fights would generate large sums of money for the 34-year-old.

"He is in the driver's seat. He put the onus on himself and he is betting on himself. You can never go wrong with that because you put it in your hands and in your control," Ellerbe stated.

Ellerbe has previous for silly comments so no need to be irate.

[QUOTE=Boxingfanatic75;20190087]Well had to follow your advice, the kid is now on ignore.[/QUOTE] I followed suit. Forgot about the ignore feature. Tired of dudes coming here with 0 intellect trolling like 12 year old kids. Good riddance.

[QUOTE=Boxingfanatic75;20190087]Well had to follow your advice, the kid is now on ignore.[/QUOTE] Quit lying hoe! Neither one of you biitches can stay off my nutts for too long!

I love seeing all the closeted Aj fans spew their hatred for Wilder in every Wilder article. Keep outting yourselves dummies.

[QUOTE=Realizniguhnit;20188726]That's BS. You'd have to be a fool to believe that. The only way we truly know if it was the smartest move or not is just [B][COLOR="Red"]how much of the 120m was guaranteed[/COLOR][/B]. Wilder isn't doing big PPV numbers.…