Ellerbe on Pacquiao-Thurman: I Think They Need To Do Rematch

Two weeks ago Manny Pacquiao turned back the clock to defeat WBA welterweight champion Keith Thurman via split decision at the MGM Grand Garden Arena in Las Vegas.  Pacquiao got off to a quick start, flooring Thurman in the first round.

He bloodied his nose in the 5th and then had Thurman hurt bad late in the fight from a vicious body shot.

Thurman, who is 10 years younger than Pacquiao, was able to recover from all of those setbacks and finish the fight strong in a losing effort. 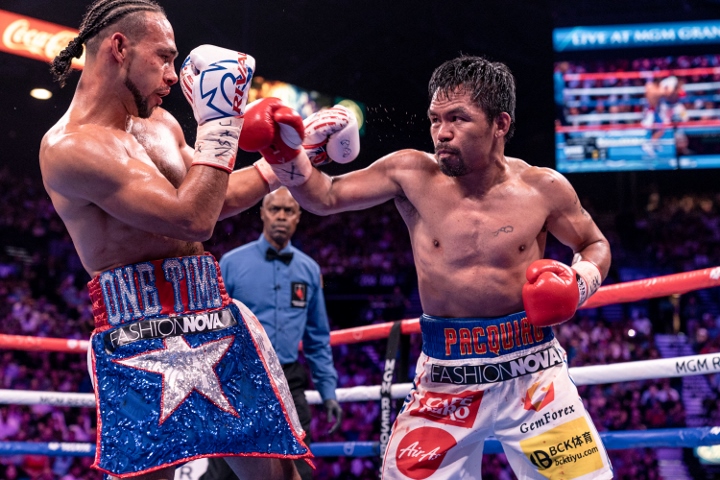 Mayweather Promotions' CEO Leonard Ellerbe, who co-promoted the fight, wasn't surprised at all at how the fight played out.

"Keith has a big heart, he fought his behind off tonight but Manny Pacquiao prevailed and he showed you why he is a great fighter and why him and Floyd are the two best fighters of this era," Ellerbe told BoxingScene.com.

While many are calling for Pacquiao to fight the  winner of the September 28th Errol Spence-Shawn Porter unification bout, Ellerbe has another idea.

"I think they need to do the rematch. I think that is the fight to make," said Ellerbe.

In 2015 Floyd Mayweather Jr. experienced what it is like to be in the ring with Pacquiao when he defeated him by unanimous decision.  Ellerbe helped Mayweather get ready for that fight and said that many of the fighters that face Pacquiao have trouble adjusting to his style in the ring.

Ellerbe is a tool, they dont need to do a rematch, What Ellerbe means is the PBC would of preferred Thurman to win that fight so they will keep re-doing it until Pacquaio gets it right and loses. The PBC…

[QUOTE=j.razor;19955122]Stop it, nobody ducking khan.[/QUOTE] Say what now? Everyone knows Floyd, Pac, Marquez and Bradley for a start ducked Khan repeatedly.. It's recorded history so denial or wishful thinking makes no difference

Mayweather saw Manny took hits from Thurman. He wants to see more from Thurman exposing Manny's flaws before giving him a rematch. Why rematch with Thurman, Manny beat him easily. Manny just gave Thurman some time, he eases in a…

[QUOTE=pasawayako;19956152]Pac go up in the ring snd he said "why not" but ellerbe don't want to make it happen.[/QUOTE] Dude , stfu , and this is coming from a longtime Pac fan If your such a big fan , you…