Ellerbe To Hearn: Hate on What? Everybody is Laughing at You!

Mayweather Promotions CEO Leonard Ellerbe has quickly hit back at some of the statements that were made by his promotional rival, Eddie Hearn of Matchroom Boxing.

In a recent interview, Hearn explained that Ellerbe has been unfairly critical of the streaming service DAZN. And the British promoter questioned Ellerbe's intentions when it comes to liking certain tweets on social media, tweets which are critical of DAZN and Hearn.

“He calls DAZN, the dead zone,” stated Hearn. “He’s become a hater. He’s always talking about haters and how bad they are. Why would Leonard Ellerbe hate on a platform that is giving fighters an opportunity to make career high payday to box more often than they’ve ever box before.

"Ellerbe should know better. He should be actively encouraging DAZN to pay fighters more money. When I look at Showtime, I’m not criticizing Showtime, FOX, or ESPN, I think it’s brilliant. I think any platform that’s investing in the sport of boxing and are letting boxers in this dangerous sport earn career changing money should be encouraged. Why is he trying to put down DAZN, is he scared, is he a hater?” 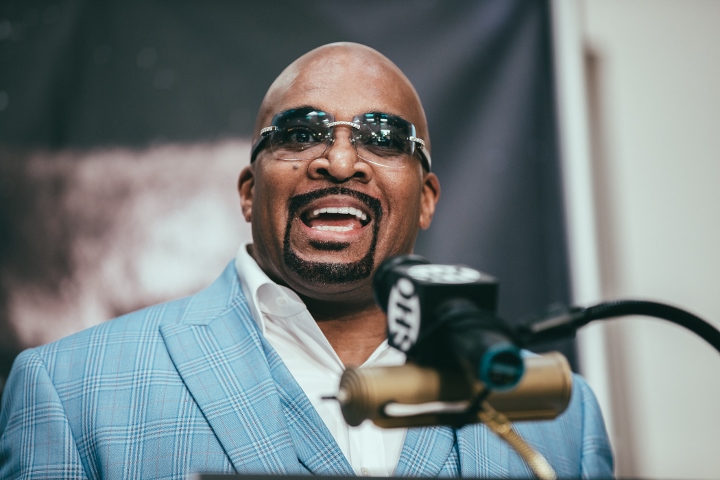 Ellerbe, who promotes super featherweight champion Gervonta Davis among others, disputes any claim that he's hating on DAZN, Hearn or anyone else.

"Hate on what? Let me get this straight, he had what he claimed to be the number one heavyweight who supposedly had the most traction at the time, brought him to America for a debut, put him in a short-notice fight he shouldn't have never been in fighting a guy like Andy Ruiz, who has tremendous skills and just came off of a fight, got him beat, and now he's the number four guy," Ellerbe explained to Fighthype.com.

"What is there to hate on? Bob Arum just outmaneuvered him; took his champ [Jose Ramirez] and tricked Eddie out of several million dollars in a fight [vs. Maurice Hooker] that he knew he couldn't lose. Now Bob returns back to ESPN laughing with the belt and the bag of money in hand, but I'm a hater? Yeah, okay; yeah right!

"Eddie's a good promoter who likes to hear himself talk, but a lot of the sh*t he talks about doesn't even make any sense. Everybody's laughing at him. He's running around here acting like he's got Canelo. That's why Oscar [De La Hoya] had to check him. He's always trying to be seen and heard; go sit your ass down somewhere."

Everybody knows ellerbe a c**ksucker thats what they know. Only thing ellerbe will ever be remembered for is being floyds gay manager. Nobody gives a **** what hes got to say

[QUOTE=markther;20009929]Why would you say that when no one knows who you are still. Anyone can look me up and research me and speak to anyone in business that knows me. I seriously doubt if your an accountant or have an…

[QUOTE=THEFRESHBRAWLER;20008261]Hearn doesn’t own DAZN retàrd and no they are not doing anything special.[/QUOTE] Hearn is the spokesman for DAZN and they're doing more for boxing than anyone with the three biggest fighters in boxing. You're clearly just a hating idiot