Ellerbe: Floyd's First Fight With Maidana Not As Close As Some Made It Out To Be

Six years later, Leonard Ellerbe still can’t understand the rationale of those that insist Marcos Maidana did enough to defeat Floyd Mayweather in their first fight.

Ellerbe gives Maidana credit for his consistent aggression and hitting Mayweather more than any of his prior opponents. The CEO of Mayweather Promotions deems it ridiculous, though, to argue Maidana won their 12-round welterweight title unification fight in May 2014.

“Maidana won a few rounds, but the fight wasn’t as close as some made it out to be,” Ellerbe told BoxingScene.com. “Floyd clearly won the fight. It was more so that Maidana was very aggressive and Floyd got hit more in that fight than he had in previous fights. And so, the fans were so caught up in that part, because they wanna see Floyd lose, there was more made of it than what was actually going on in the fight.”

Stephen Espinoza, Showtime’s president of sports and event programming, doesn’t think their fight was as close as Pernick scored it, either. Espinoza considered it entertaining enough to warrant an immediate rematch four months later, but he doesn’t think Mayweather’s win is a debatable result.

“I think the public was surprised because certainly there have been more hyped fighters coming into Mayweather fights, and Floyd dispatched them pretty easily,” Espinoza said. “In the Maidana fight, clearly Floyd won decisively, but it was a more physical battle than we’re used to seeing Floyd get in. So, I think relatively speaking, it was a rougher fight than most [for Mayweather]. In some senses, Maidana did what a lot of fighters come in and say that they want to do[KI1] .

“Now look, with Floyd you have to kind of grade on a curve. He has been so dominant you’re left to say, ‘Well, who was more competitive than other guys?’ And when you look at his more competitive fights, you’ve gotta put Maidana in there. Was it a close fight? Not particularly. But was it closer than a lot of Mayweather fights? I believe the answer to that is yes.”

CompuBox credited Maidana with landing more punches against Mayweather in their first fight than any opponent in the 41 Mayweather matches the company worked during his career. According to CompuBox, Maidana landed only nine fewer punches overall than Mayweather (230-of-426 to 221-of-858). 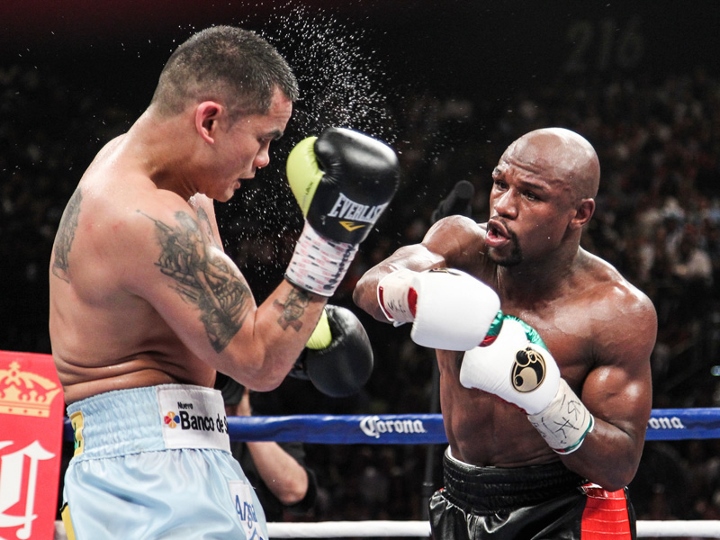 Argentina’s Maidana – who had battered and beaten a boxer Mayweather mentored, Adrien Broner, in his previous fight – went after Mayweather as soon as their first bout began. His aggression and awkwardness often left Mayweather backed against the ropes, trying to slip hard right hands, elbows and everything else Maidana managed to throw at him.

Maidana opened a rare cut over Mayweather’s right eye in the fourth round, a laceration Mayweather says was caused by a head-butt. The rugged Maidana also landed several flush right hands to Mayweather’s head in the first half of their fight for Mayweather’s WBC and Maidana’s WBA welterweight titles at MGM Grand Garden Arena in Las Vegas.

Mayweather, then 37, took those shots well. The undefeated five-division champion connected with numerous hard body shots and landed lots of lead right hands when there was distance between them, and they were away from the ropes.

Mayweather seemingly took control later in their action-packed encounter, but Showtime’s Al Bernstein unofficially had Maidana ahead, 77-75, through eight rounds. Fellow Showtime broadcasters Steve Farhood and Paulie Malignaggi had it even, 76-76, entering the ninth round.

“Maidana is a solid fighter, but I thought Floyd won the fight,” Ellerbe said. “I know some of the fans and the media thought the fight was very close, so we said, ‘Let’s run the sh-t back.’ ”

Mayweather won their 12-round rematch by unanimous decision in September 2014 at MGM Grand Garden Arena. Moretti (116-111), John McKaie (116-111) and Guido Cavalleri (115-112) each scored Mayweather the winner of their second showdown.

“He was very dirty in the fight, but that’s his style,” Ellerbe said of Maidana. “He fought a good fight. It was a very entertaining fight, but he didn’t win the fight.

“But it’s all about Floyd Mayweather. He goes out there and he dominates his opposition and he makes very good fighters look ordinary. Maidana fought a very good fight that night, but he didn’t win the fight.”

Nevertheless, his initial meeting with Maidana was widely viewed as Mayweather’s most difficult fight since his narrow win over Jose Luis Castillo in their first bout 12 years earlier, also at MGM Grand Garden Arena.

Mayweather beat Castillo by unanimous decision in their first 12-round lightweight title fight in April 2002. Judges Anek Hongkongtam (116-111), John Keane (115-111) and Jerry Roth (115-111) each scored Mayweather the winner versus Mexico’s Castillo that night.

At the very least, Maidana made Mayweather, who was 25 when he beat Castillo, more uncomfortable than Mayweather was accustomed to feeling in the ring.

“If you’re rooting against Floyd, you wanna see him get hit and roughed up,” Espinoza said. “You got some of that in the Maidana fight, so the people that were looking for that finally got a little something to hang their hat on. And it’s like, ‘Well, this guy did better than some other guys.’ For those people who were rooting against Floyd, that gave them a reason to try and argue that Maidana won. But objectively, it was still a pretty dominant fight for Floyd.”

I've never denied I wrote a quote. I'm saying it's modified. And I also wrote it at a time before ssm was 39 years old, cott o wasn't Pac s used goods, so it was a long time ago and…

[QUOTE=hugh grant;20568625]You didn't see.my original quotes. Your taking it off someone else, and taking their word for it. I can't remember word for word but I know I had Pac name in 2nd paragraph of your 2nd signature quote. If…

[QUOTE=Jedi Vader;20568616]You have been backed into a corner through your lies and now you're making out I'm the liar. Prove it that I'm lying, boy.[/QUOTE] You didn't see.my original quotes. Your taking it off someone else, and taking their word…

[QUOTE=hugh grant;20568604]Your so full of lies I don't know where to begin. But the moderators are Floyd boys so I don't see them taking action against you[/QUOTE] You have been backed into a corner through your lies and now you're…

[QUOTE=Jedi Vader;20568562]This is the full post of quote on my sig. Explain how that has been modified? The second post of yours, on my sig, is a word-for-word post that you wrote and have since deleted because people kept mentioning…