Jack dropped Pascal in the 12th round and nearly did enough to stop the tired title-holder in the final round of their light heavyweight championship match December 28 at State Farm Arena in Atlanta. Pascal withstood Jack’s onslaught, though, and won a split decision to retain the WBA’s secondary 175-pound crown.

“He has a number of options, with the first being the rematch with Pascal,” Ellerbe, the CEO for Mayweather Promotions, told BoxingScene.com. “That’s definitely the top priority, but he has a number of other options because he’s a warrior and he always makes great fights. He always gives the fans exciting fights, and he always wants to fight the best that are out there. But his number one option is fighting Pascal again.” 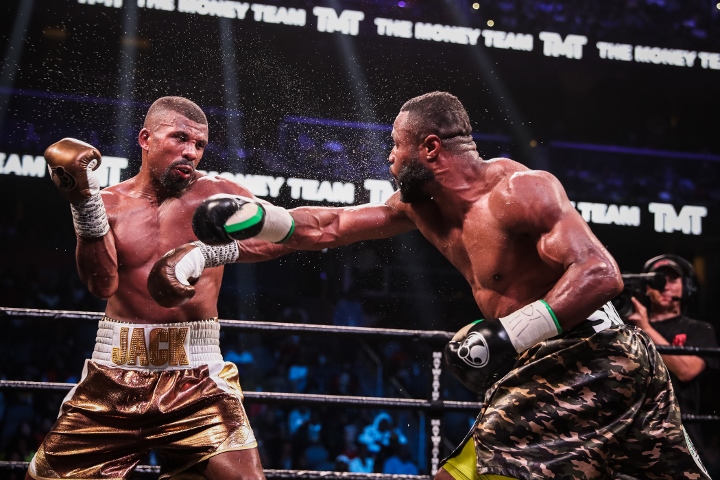 Quebec’s Pascal (35-6-1, 20 KOs, 1 NC), who knocked Jack to the canvas in the fourth round, won what emerged as one of the most competitive, entertaining encounters of 2019 on two scorecards. Judges Barry Lindenman and Nelson Vazquez both scored Pascal the winner by the same margin, 114-112.

“All I can remember is being on my feet, yelling and screaming,” Ellerbe said. “We’re so passionate about our fighters, so I was just urging him to keep pressing [Pascal]. He had him hurt, and the referee was about to stop the fight, I thought. Pascal is tough as nails, and I’ve got mad respect for him. He’s a great champion. But Badou pushed him to the limit, pushed him and pushed him, and he came seconds away from getting the stoppage.

“We all thought that Badou won the fight. But it’s water under the bridge. We’re moving on. Badou has been a guy who’s been on the wrong side of a few bad decisions. The entire boxing community is well aware of that. But he’s a warrior, and fans love watching Badou fight. He comes to fight. That’s one thing about Badou – he comes to fight. He’s been in eight championship fights in a row, and we’re looking to make [the Pascal rematch] for him. But he has a number of options.”

“Johnathon Banks is a superb trainer,” Ellerbe said. “He’s obviously worked with Wladimir Klitschko and with Triple-G, and he’s doing a phenomenal job. He’s an excellent, young trainer. He brings vast knowledge to the table. And again, I think it’s a great fit. I think this is an addition that will take Badou a notch above. He’s motivated and he’s been working to keep his weight in check, and staying fit.”

I personally feel like Jack won that fight myself. I gotta go with objectivity first though. And look for reason. A lotta rounds were close, and Badou turned up in the last few rounds. It looked good but clearly according…

I’ve got no issues watching this again.