Ellerbe: Arum Lost His Mind, He Talks Sh*t and Then Wants a Deal

Leonard Ellerbe, CEO of Mayweather Promoters, shook his head at the recent statements from Bob Arum, the head of Top Rank.

On Saturday night, Arum lashed out at Al Haymon - the founder of Premier Boxing Champions.

Arum has long claimed that Haymon has done everything possible to prevent a unification showdown between welterweights Terence Crawford and Errol Spence. 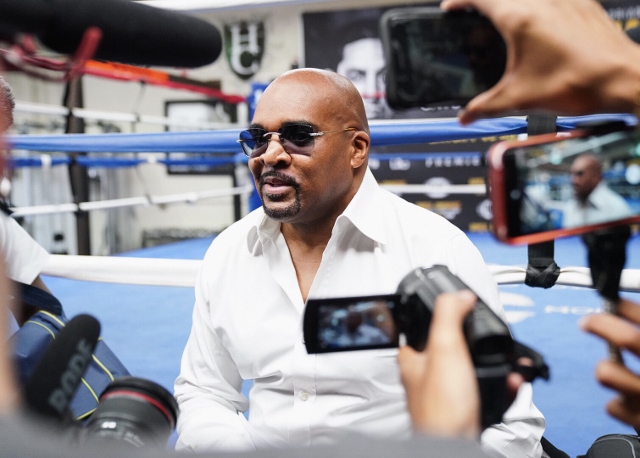 Arum, who promotes Crawford, advised fans to boycott all PBC events until Spence's adviser, Haymon, agrees to a unification deal.

Arum would later tell reporters that Haymon will likely use the race card, to persuade Spence to fight someone else.

But Ellerbe, who works closely with Haymon, believes Arum is doing a lot of damage by verbally attacking Haymon on a regular basis.

“By making those comments that he made, I guarantee you that’s not going to help him in any kind of a way,” Ellerbe told Yahoo Sports' Kevin Iole.

Ellerbe explained that Arum is grasping at straws, because nearly all of the big welterweight names are aligned with PBC - while Crawford's options are extremely thin.

Arum wants to do a co-promotion, as Spence and Top Rank are contractually tied to ESPN, and Spence - through his deal with PBC - is featured on Fox Sports and Showtime.

But for two major networks to come together, the opportunity has to be very lucrative - and Ellerbe strongly believes that a Crawford vs. Spence unification is not even close to being a major pay-per-view event, because neither fighter has crossed over to superstar status.

“Right now, nobody really knows either Spence or Crawford outside of 300,000 or 400,000 boxing fans,” Ellerbe said. “ … If we’re looking to elevate the sport, everyone has to make a concerted effort to do that and think of the big picture. They don’t happen just because Bob Arum jumps up and screams and yells because he wakes up one day and realizes, ‘I can’t deliver my kid a big fight.’

“You would agree the Wilder-Fury fight was very successful and people liked it and wanted to see it again, right? Well, the rematch was a week away from being made, and guess what? Bob Arum and Top Rank came in and signed Fury and ended the rematch. I think Bob has done everything he can possibly do to f*** this up.”

[QUOTE=BillyBoxing;19681124]When you have to defend PBC for somehow doing in house fights, you know there is something wrong and you are not getting co promoted fights Yeah they can do in house fights. Porter is the less cold feet out…

[QUOTE=kraftzman;19682054]This Ellerbe guy can't handle big boys talk. He's not fit for this kind of business.[/QUOTE] Besides sucking Floyds d***, he sucks as a promoter. Chit talking is and always will be part of boxing.

[QUOTE=TreJac;19681001]The lame "never should've resigned" excuse is getting old! The points you're making makes you sound like a fanboy/promotional/social media groupie! "My guy has more titles, my guy has more followers, my guy has prettier teeth", which has nothing to…

[QUOTE=Squ□redCircle34;19680689]Call a spade a spade! Haymon doesn’t have to Make the fight, Spence has Porter, Thurman, Danny, Pacquiao and Ugas! Spence will be IBF/WBC/WBA champ with a bigger following and better welterweight resume and resume in general and likely etch…

Bob Arum, the man that had one fighter fight the same 3 people 11 ****ING TIMES, has the nerve to call someone else a scammer? He's one of the very worst people on the planet.