Eleider Alvarez Vows Impressive Return: Last Fight Was Not Me

The Montreal Journal reports that former WBO light heavyweight champion Eleider Alvarez is back at the gym.

After a weeks of rest, Alvarez is more motivated than ever to secure world championship bout by the end of the year.

Alvarez has been clearing up his mind since he lost his title to Russia's Sergey Kovalev. A reflection necessary to not repeat the same mistakes. 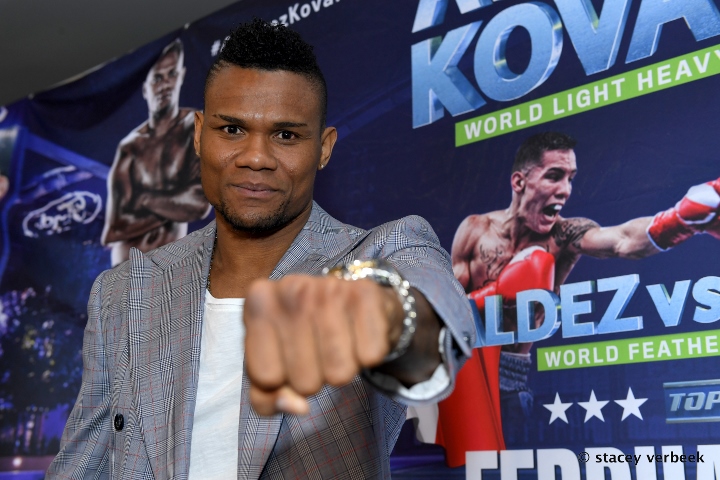 He is ready for a fresh start, after losing a clear-cut decision to Kovalev in their rematch back in February.

Alvarez had knocked Kovalev out in seven rounds back in August of last year. He made the mistake of going for a knockout victory from the very start of their bout.

"I took advantage of my holidays in Colombia to spend time with my family and friends," said Alvarez to The Journal. "It made me feel good and I was able to change my mind.

"I noticed that people in my country always support me despite my first career loss. I'm still very popular.  I was at my cousin's party. A woman went into the street and recognized me. She began to get so excited, as if she had just won a large sum of money. All she wanted was to take a picture with me! It was an amazing moment!

"Against Kovalev, I did not have the right strategy. I do not know what was going through my head despite the instructions of my trainer Marc Ramsay. It's my fault what happened in this fight. You will find the same Alvarez as you saw before. The one who uses his jab to prepare his knockout. Not the one running after the knockout from the first bell as it happened to my last fight. That was not me."

Alvarez is slated to return to the ring on June 28 at the Videotron Center in Canada. One of the names being kicked around for him to face is Jessie Hart, who would move up in weight.

I felt Alvarez won 3 or 4 rounds in the second fight I didn't think the judges did a bad job the fight. I stand by both my predictions. Fight one I said Alvarez wouldt get knocked out and was…

He got out boxed by a heavily.compromised version of Kovalev. Kovalev did have a way better game plan as is more skilled but Kovalev still made a lot of.mistakes but he fought like a tamed beast. If he was hit…

This guy's hype train died quickly. Everybody was on his dick after he got lucky against Kovalev. Where did all the Alvarez fans go?

Alvarez got beat by a sub par but determined Kovalev. He looked shaky and wasn't the Krusher he usually is, but he did enough to get the job done. Sadly for Alvarez, Kovalev may have his feet under him next…

Oh that was you... Just getting your a#s whooped