Another day, another main event lost for ESPN and Top Rank.

This time, it was Eleider Alvarez who withdrew Wednesday from his 12-round light heavyweight fight against Joe Smith Jr. Alvarez and Smith were supposed to meet in a WBO 175-pound elimination match July 16 in Las Vegas, but the Montreal-based Alvarez suffered a shoulder injury while training.

BoxingScene.com has learned that the Alvarez-Smith match could be rescheduled for as soon as sometime in August, but it is unclear exactly how long Alvarez (25-1, 13 KOs) will need to fully recover. Smith (25-3, 20 KOs), of Mastic, New York, is not expected to face another opponent July 16, thus Bob Arum’s promotional company is seeking two new fighters for its main event that night. 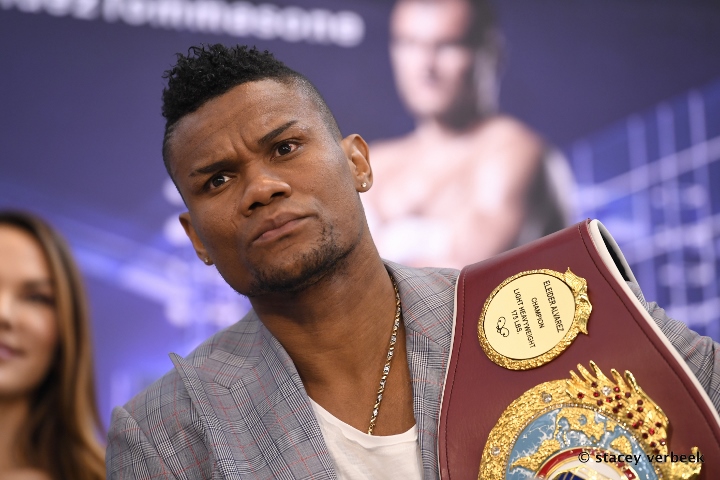 The Athletic’s Mike Coppinger first reported Wednesday that an injured Alvarez withdrew from his July 16 fight with Smith.

Alvarez’s withdrawal marked the second straight day Top Rank lost a main event ESPN was supposed to televise in July. It also was the third time in the past week that Top Rank and ESPN lost a main event either due to an injury or COVID-19.

On Tuesday, Jamel Herring announced that he tested positive last week for COVID-19. That forced the postponement of his WBO junior lightweight title defense against Puerto Rico’s Jonathan Oquendo (31-6, 19 KOs), which was scheduled for July 2 in Las Vegas.

Top Rank replaced the Herring-Oquendo bout with Jose Pedraza-Mikkel LesPierre, a fight that had been postponed five days earlier due to COVID-19.

Pedraza and LesPierre initially thought they’d be rescheduled to fight July 14, but they agreed to meet July 2 once Herring had to postpone the Oquendo bout. Cincinnati’s Herring (21-2, 10 KOs) expects his fight with Oquendo to be rescheduled for some point later in July.

Whenever Alvarez and Smith meet, the winner will advance to fight for the vacant WBO light heavyweight title. Alvarez is ranked number three by the WBO, one spot above the fourth-rated Smith.

Russia’s Umar Salamov (25-1, 19 KOs), the WBO’s number one-ranked light heavyweight, will face fellow Russian Maksim Vlasov (45-3, 26 KOs) in the WBO’s other eliminator. The Alvarez-Smith and Salamov-Vlasov winners will fight for the WBO title Canelo Alvarez vacated after he knocked out Sergey Kovalev in the 11th round and became a four-division champion November 2 in Las Vegas.

Hopefully they reschedule this. One of the few upcoming fights I was genuinely excited about.

For ****s sake. Zepeda v barancyk and this fight were the only fights i was looking forward too.

Yea another fight that might of could been something drops out. Just feels like until the fan is allowed back into the arena we are going to be given schedules that can not be taken seriously. Nothing like being a…

I hope Eleider Alvarez shoulder injury is not serious and heal well. I don't fault him for this. Damn! This is another of the fights I am salivation for and looking forward. :boxing: