It remains doubtful that the light heavyweight title left behind by Saul ‘Canelo’ Alvarez will be filled by year’s end.

For the first time in more than five months, though, a major first step has been taken towards filling that void.

In a development first reported by The Athletic’s Mike Coppinger, light heavyweights Eleider Alvarez and Joe Smith Jr. have agreed to terms for a title elimination bout that was ordered more than three months ago. A tentative date is in place for July 16, with the bout to take place at the MGM Grand Convention Center in Las Vegas. 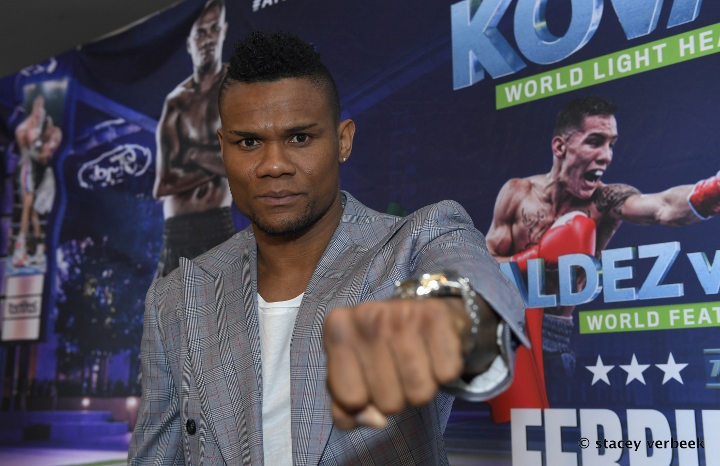 News of the bout was confirmed to BoxingScene.com by Carl Moretti, vice president of operations for Top Rank who noted that the date could potentially change. The fight also remains pending the approval of the World Boxing Organization (WBO), which will likely come once they restore operations in mid-June.

The matchup serves as the opening leg of a four-man light heavyweight boxoff ordered by the WBO this past January. Original plans called for Canada’s Alvarez (25-1, 13KOs)—a former WBO light heavyweight titlist—to face Mexico’s Gilberto Ramirez (40-0, 26KOs), who abandoned his 168-pound title reign to campaign at 175 pounds. The fight was ordered alongside a pairing between Umar Salamov and Maksim Vlasov, a bout which both sides welcome but still await a fight date.

Ramirez removed himself from the mix after failing to comply with the WBO’s order to negotiate or with its ordered purse bid, which Top Rank won with a $350,000 offer as the session’s lone bidder. Top Rank had represented Ramirez through much of his career, but their relationship soured in the second half of 2019 and with the unbeaten former titlist deciding he will take his career in another direction.

That led to Smith (25-3, 20KOs)—a former title challenger from Eastern Long Island, New York—entering the mix, with his team all the way on board for a fight with Alvarez. The WBO formally ordered Alvarez-Smith in late February, only for such talks and the sport as a whole to be placed on hold due to the ongoing coronavirus disease (COVID-19) pandemic.

Once Top Rank was able to arm itself with summer fight dates, a pathway was created to finalize this fight which will air live on an ESPN platform. Top Rank will stage a series of fights from the MGM Grand Convention Center beginning June 9 and presumably all the way through August. This fight easily ranks as among the best matchups planned over that stretch.

Alvarez and Smith both scored wins one week apart this past January on ESPN. Smith punched his way back into contention following a 10-round win over Philadelphia’s Jesse Hart on January 11 in Atlantic City, New Jersey. Hart was in line for a title shot had he taken any other route, but instead gambled on himself and lost out on a golden opportunity.

One week later, Alvarez picked up his first win in more than 17 months with a 7th round stoppage of Michael Seals. It was his first fight since losing his WBO title to Sergey Kovalev in their rematch last February, six months after Alvarez scored an upset knockout over the Russian slugger to win the belt in August 2018.

The winner of Alvarez-Smith will go on to face whomever prevails in the eliminator between Salamov (25-1, 19KOs)—a Russian bred contender now based out of Las Vegas—and Russia’s Vlasov (45-3, 26KOs). The last man standing will claim the belt left behind by ‘Canelo’ Alvarez shortly after his 11th round knockout of Kovalev last November in Las Vegas.

Very good fight, I'm looking forward to this one

This is a great fight and type of fights top rank needs to make for ESPN!

Good fight. These are the kind of fights that I think should be on big event undercards. It's a crossroads battle between two warriors who have probably seen their best days, but are gonna give their all to get another…