The hard-hitting Smith beat Hart convincingly January 11 in Atlantic City, New Jersey, even though one judge strangely scored their 10-round light heavyweight fight for Hart. Smith hurt Hart with a right hand during the second round, made Hart take a knee after landing another right in the seventh round and made Hart keep away from him for much of a main event ESPN televised.

“Joe Smith had a good performance against Jesse Hart,” Alvarez told BoxingScene.com through a translator. “He did his work the way he does all the time. I’m pretty sure he’s gonna try to put that pressure on me and be physical on Saturday. We’ll see. I’m not exactly Jesse Hart.”

“I’m a way more complete boxer than Jesse Hart,” said Alvarez, who is a 2-1 favorite over Smith. “I have more tools. This is exactly what I’m going to try to show to people Saturday night. Jesse Hart is a good boxer, but he doesn’t have everything that I have.”

“Eleider can use his legs and he has good footwork,” Ramsey said. “But he’s not gonna run away from Joe Smith, the way Jesse Hart did. And he has the punch. To me, Jesse Hart was really a 168-pounder. He has a decent punch at 168. I don’t think his power is good enough for 175. And Alvarez has faster hands and more tools to win this fight.” 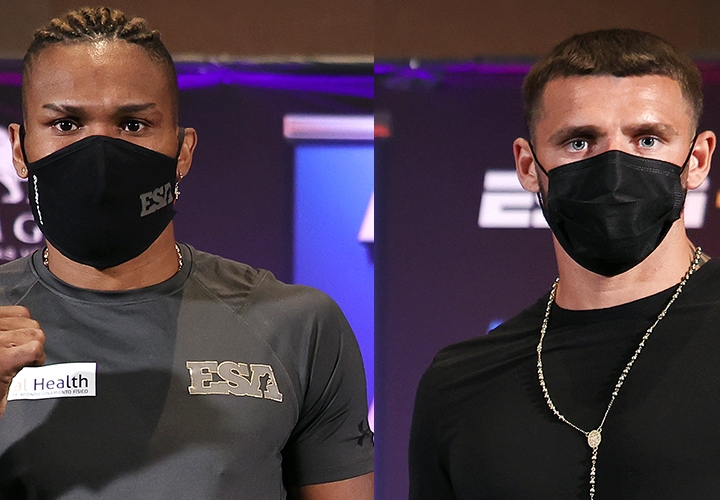 The Alvarez-Smith winner will secure a shot at the unclaimed WBO 175-pound championship Alvarez lost to Sergey Kovalev in February 2019.

Whoever emerges victorious among Alvarez, who is ranked third by the WBO, and the fourth-ranked Smith will face the winner of another eliminator that’ll match two Russian contenders – top-rated Umar Salamov (25-1, 19 KOs) and second-ranked Maksim Vlasov (45-3, 26 KOs). The Salamov-Vlasov fight has not yet been scheduled.

Canelo Alvarez vacated the WBO light heavyweight title after knocking out Kovalev (34-4-1, 29 KOs) in the 11th round of their November 2 bout at MGM Grand Garden Arena in Las Vegas.

Eleider Alvarez, 36, and Smith, 30, were scheduled to square off July 16 in an ESPN main event at MGM Grand Conference Center. The Colombian-born Alvarez withdrew from that date late in June due to an injury to his right shoulder sustained during a sparring session.

“We could’ve given him a cortisone shot or something like that,” Ramsey said. “But when training camp isn’t going in the right direction, usually the result of the fight follows in the same direction.”

Alvarez took a full week off after the fight was postponed and gradually intensified training once he returned to the gym.

“It was not something major,” Ramsey said. “It was not a big injury, but the type of fight Eleider is doing right now, it’s a top-level fight, and we don’t wanna send him into the ring with an injury. We wanted to make sure he’s 100 percent, and now he’s completely perfect.”

Montreal’s Alvarez asked for a postponement because he regretted not delaying his rematch versus Kovalev. Alvarez suffered an Achilles’ injury during training camp for their rematch, which limited his roadwork, hurt his conditioning and adversely affected his performance in a fight he lost by 12-round unanimous decision at the Dallas Cowboys’ training facility in Frisco, Texas.

“This injury I took care of right away,” Alvarez said. “We made a team decision. For sure, what happened with the Kovalev fight impacted my decision. I didn’t wanna make the same mistake twice.”

Alvarez won’t make the same strategic mistake again he committed against Kovalev, either. Ramsey and Alvarez believe he was too focused on another knockout of Kovalev, whom Alvarez dropped three times on his way to a seventh-round knockout in August 2018 in Atlantic City.

Russia’s Kovalev convincingly out-boxed Alvarez in their rematch. Judge Lisa Giampa scored all 12 rounds of that bout for Kovalev (120-108), who won eight rounds apiece according to judges Levi Martinez (116-112) and Jesse Reyes (116-112).

“We knocked him out [in the first fight], and it was not only Eleider’s mistake, it was a team mistake,” Ramsey said of Alvarez’s rematch with Kovalev. “We had the feeling we could hurt the guy and at some point we were gonna catch him. When the rounds pass and pass and pass, you need to win those rounds if you go to a decision. I think we expected a knockout too much in that fight.”

Alvarez wasn’t overly concerned with knocking out the heavy-handed Seals (24-3, 18 KOs), but his picture-perfect right hand knocked out Seals seven months ago at Turning Stone Resort Casino. Smith’s only loss inside the distance came in August 2010, when Smith suffered a broken jaw and lost by fourth-round TKO to Eddie Caminero.

Smith sustained a fractured jaw in the second round of that bout. The Mastic, New York, native fought for two-plus rounds with that injury, but he eventually succumbed to the extreme pain.

Alvarez would take pride in stopping Smith more conventionally, but he is primarily concerned with winning and solidifying a chance to win back the title he feels he never should’ve lost.

“I wanna show I’m one of the top dogs in my division right now, and show that I’m on another level,” Alvarez said. “I’m motivated to prove to people that I can get back to the top.”