Eleider Alvarez Crushes Michael Seals With One Shot in Seventh

Former WBO light heavyweight champion Eleider Alvarez returned after a 350-day layoff from his first career defeat and a partially torn right Achilles looking to plant himself back into the title picture.

After a slow start, Alvarez (25-1, 13 KOs) definitively ended the fight with a devastating counter right hand that sealed the deal against Michael Seals (24-3, 18 KOs) on Saturday at the Turning Stone Resort & Casino in Verona, New York.

Seals dropped the moment the punch landed, with his head bouncing off the bottom ropes. The fight was waved off before the count of 10 was reached, and Alvarez survived the slow start to bounce back with a win. The Top Rank-promoted fight was the televised main event ESPN.

“During training camp, we practiced {the right hand} over and over. My trainer with me at first because I wasn’t doing what he was asking. Finally, we got the knockout,” said Alvarez, who landed just 49 punches in the fight. “I was out of the ring for 11 months. I wanted to come back as the fighter that beat Kovalev, and this is what we practiced for.” 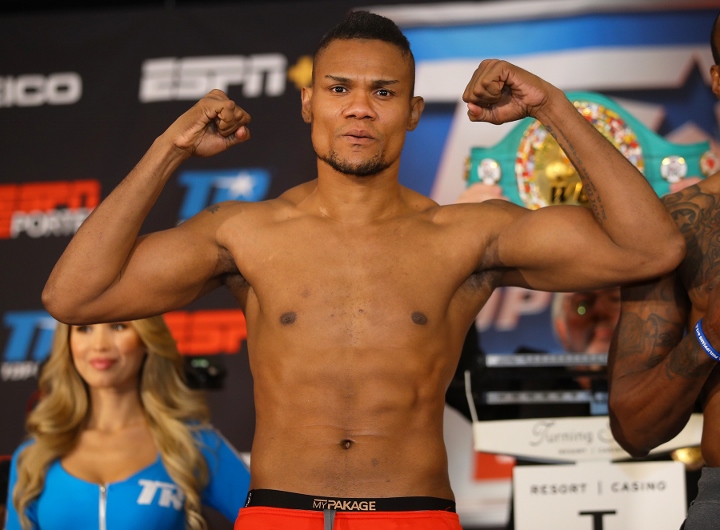 The 35-year-old Alvarez was fighting for the first time since losing his WBO title to Sergey Kovalev last February. Alvarez, a 2008 Olympian, had knocked out Kovalev for the title in 2018 but wasn’t able to defend it in the immediate rematch.

The rust seemed to show from the get go until Alvarez let his hands go. Both fighters kicked off the bout by showing respect for one another and not really firing off much in the first frame.

Alvarez and Seals remained tentative through two rounds, but Alvarez barely did more to pocket the round. In round three, the boos broke out as restless fans demanded more output and activity.

With punching at a premium, action in round four was few and far between, as neither fighter let their hands go. The milquetoast match never made a mark and looked like a glorified sparring session through five rounds.

With the fight moving forward in spurts, blood began to drip from the nose of Seals in the sixth.

Seals, who’d never reached past the sixth round in his career, largely due to scoring 13 first round KOs, sported a 4 ½ reach advantage and three inch height advantage but never used it to his favor, landing just 32 total shots of his own.

In the seventh, Alvarez made sure it didn’t matter by emphatically ending the fight. The 37-year-old Seals, a former football player with a big right hand, had a four-bout winning streak snapped.

Seals, a Mobile, Alabama-based fighter, revived his career while driving Uber and Lyft instead of leaning on his college degree after suffering a pair of losses in three fights from 2015 to 2018 to the hands of Edwin Rodriguez via TKO and Michael Gbenga via disqualification. The heavy-handed Seals was also derailed with injuries and little opportunities before meeting Alvarez, and he’s now forced to go back to the drawing board.

Alvarez, a Colombian combatsman who fights out of Quebec, also has wins over Canadians Lucian Bute and Jean Pascal.

[QUOTE=Shadoww702;20334785]Umm Kovalov beat this guy like almost every round he won...[/QUOTE] Canelo wouldn`t fight him. This guy stopped Kovalev in first fight.

[QUOTE=JakeTheBoxer;20334275]No way canelo fights any top 175 fighter not named Kovalev.[/QUOTE] Umm Kovalov beat this guy like almost every round he won...

No way canelo fights any top 175 fighter not named Kovalev.

Alvarez is a better fighter than kovalev. He should fight canelo. Alvarez vs Alvarez sounds just good!