According to Eleider Alvarez, that version of Kovalev didn’t even resemble the former light heavyweight champion he knocked out in August 2018. The Russian veteran didn’t look like the skilled technician that beat him in their immediate rematch, either, Eleider Alvarez explained during a recent interview with BoxingScene.com.

Canelo Alvarez knocked out Kovalev with a right hand in the 11th round of a fight that had been competitive November 2 at MGM Grand Garden Arena in Las Vegas.

“In the Canelo fight, I didn’t recognize Kovalev,” said Eleider Alvarez, who’ll fight Michael Seals in a 10-rounder Saturday night in Verona, New York. “That was not the same guy that I fought twice. It was not the same guy that fought [Anthony] Yarde. Maybe he had a tough, tough time in his last three fights, but usually he comes in with a hard jab and he wants to finish you.

“In that fight, it was just a light jab and he was trying to survive more than he was trying to win. There probably wasn’t enough of a layoff between his last fight [against Yarde] and the Canelo fight. That’s why he was not ready like he used to be.” 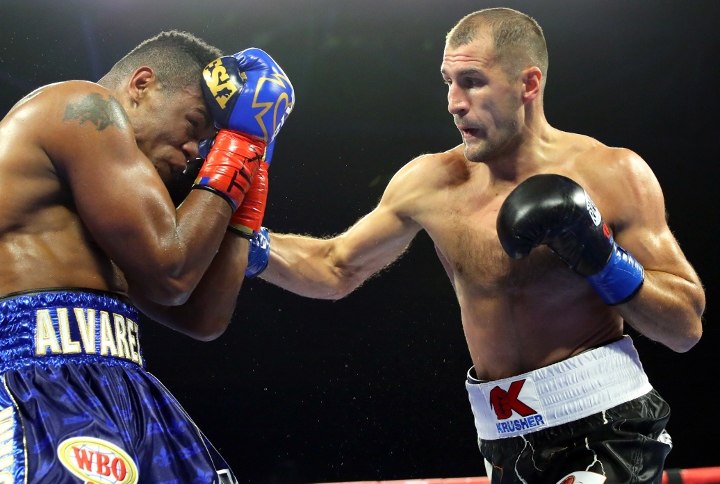 Only 10 weeks elapsed between the day Kovalev knocked out Yarde with a single, jarring jab in the 11th round August 24 in Chelyabinsk, Russia, Kovalev’s hometown, and the evening Kovalev got knocked unconscious by Canelo Alvarez.

The 36-year-old Kovalev (34-4-1, 29 KOs) made a career-high purse of $12 million for facing Canelo Alvarez (53-1-2, 36 KOs), who became a four-division champion by beating him. That was more than enough incentive for Kovalev to agree to such a quick turnaround for a 12-round, 175-pound title fight DAZN streamed.

Down on all three scorecards, Eleider Alvarez dropped Kovalev with a right hand in the seventh round of their first fight in Atlantic City, New Jersey. Kovalev got up, but Alvarez floored him twice more before referee David Fields stopped the action in the seventh round at Hard Rock Hotel & Casino’s Etess Arena.

In their rematch for the WBO light heavyweight title, a more careful Kovalev out-boxed Eleider Alvarez to win a 12-round unanimous decision last February 2 in Frisco, Texas. Judges Lisa Giampa (120-108), Levi Martinez (116-112) and Jesse Reyes (116-112) all scored at least eight rounds for Kovalev that night at Ford Center at The Star, the Dallas Cowboys’ training facility.

[QUOTE=bigdunny1;20332774]Fishy? Kinda like how GGG went from Mexican Style to Nothing But Scared Jab Style against Canelo? Or Jacobs who wanted to jab and not commit to big punches against Canelo. All these guys went jab happy, and got backed…

Man, these writers on here really have to ham up there article to draw more viewers who obviously didn't see the fight between Canelo and kovalev, if they believe that the Russian was knocked unconscious. Far from it. Also, Eleider…

[QUOTE=james240;20333358]Wow thats crazy! how far back did that occur?[/QUOTE] Google BoxRecMikeTyson and you'll see how often he fought...