Ekaterinburg, Russia - WBA #7 Alexey Egorov (9-0, 7 KOs) continued his fast track to a world title shot with a quick demolition of hard-charging Germany-based Ukrainian Roman Golivaschenko (20-4, 18 KOs) in the third round.

After a steady first round, Egorov dropped Roman with an overhand right midst into the second. He continued to deliver punches, taking little in return. Early into the third, he landed several hard hooks to put Golivaschenko on his knees. The Ukrainian got up but referee waved it off on a towel, with Ukrainian complaining on the issues with his right side. Time was 0:53, and Egorov acquired WBA Continental title. 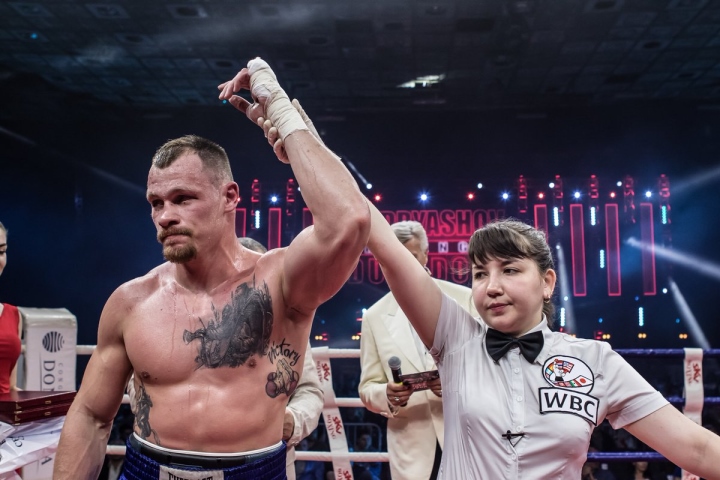 In a semi-major controversy, hard-hitting and highly-rated Russian cruiserweight Yuri Kashinskiy (18-0, 16 KOs) struggled a lot but got through very tough Frenchman Olivier Vautrain with a questionable majority decision over ten rounds.

Vautrain, who fought in early May, was very resilient, specifically in the first half of the bout. He didn’t hit hard, yet he hit precisely, delivering stiff jab and quick one-twos to the head of Kashinskiy. The Russian looked angered and a bit lost sometimes, his physical prowess being rendered totally useless at times.

In rounds seven and eight, Yuri’s body shots started to take toll on his foe. Vautrain has slowed down and began to be hit more. The Frenchman summoned all his power to survive through and even got things leveled during the last round.

Romanov, 33, who is best known for knocking out reigning undefeated heavyweight champion Deontay Wilder in 2008, while still in amateurs, dropped Bracamonte with a hard right cross in the first. The Argentinean quickly regrouped and used his height and weight advantage to survived through.

Romanov was much quicker and scored at will, mostly using one-two combo to damage his foe. Bracamonte ate a number of heavy blows but was never truly rocked. Moreover, he had his moments in the fifth, pummeling Romanov around the ring. Still, the Russian was sharper, opening a gash below Bracamonte’s left eye and damaging his face.

At the end, all three judges saw it identically 99-90 - for Romanov.

Papin was successful in the first, Jur scored with some bombs in the second, but his power wasn’t enough to keep Papin at bay as the Russian continued to move forward. In the third, Papin pinned Jur to the ropes, mauled him there, then landed with a smashing right on the Romanian’s way out. Jur was down and failed to beat the count.

Papin moves up to 11-0, 10 KOs. He is now the IBF international cruiserweight titlist.

Southpaw Tischenko, 27, dropped Tabul, 28, with a huge right hook, then got the job done with a series of unanswered blows at 2:49 of the first. The Russian giant (6’5’’) is now the WBO I/C cruiserweight titlist.

In a televised opener, Rising bantamweight powerhouse Fatima “Amazon” Dudieva (4-0, 2 KOs) made a short work of Tamara Melkonyan, stopping her 90 seconds into the first round. Dudieva crushed Melkonyan (1-2) with powerful right hands in succession.

Kashinsky won on paper only